2015 Youtube video about building and sailing POGO, by Llew Hebbard, in Canada. 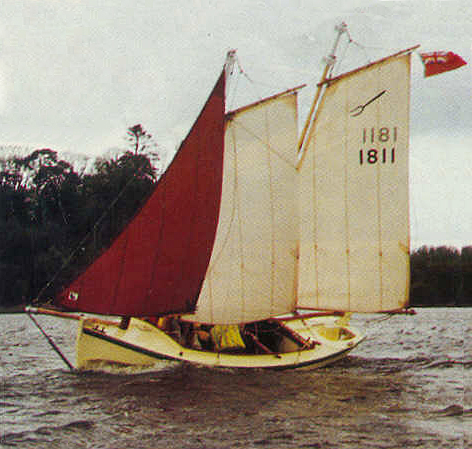 I’ve been fortunate in that I’ve been able to travel a good deal outside of North America and I’ve been both amused and distressed to learn the image people in other countries have of us.

The only strong anti-American behavior I’ve personally experienced was in a bar on a small Greek Island. I was sitting at a table having a drink, people watching, when a woman at a nearby table turned to me and asked “Deutsche?”

Conversation in the room stopped, a large group of people surrounded me, and in English and Greek started in about how terrible the States and its citizens are.

This woman who started the show spoke excellent English, so in a loud voice I asked her to PLEASE translate what I was going to say to the room. I was greeted with silence, and I said, very slowly and clearly; “listen. I have no more control or influence over my government than you have over yours. I don’t know where those guys come from, and they’ve never consulted with me. I bet you could say the same about your government?”

Well, apparently she did translate this, because suddenly most of the people started laughing, all tension left the room, and we all had a few more drinks. And later on a woman told me she was sorry she had met me. She said she disliked Americans, but I was the first one she’d ever met and I wasn’t living up to what she expected….

Several years later we had another Presidential election, receiving among other things a new Vice-President. What a fascinating character this fellow, Mr. Quayle, was, and the more I learned about him the more I was reminded of my experience in Greece. Where did he come from, and HOW did he become Vice-President? Would people outside of the States judge ME by HIM? Back in Europe a few years after that election, I was pleased that even in France people seemed able to judge Americans as individuals rather than by the elected leaders, which was a pleasant relief!

Anyway, this man went on a trip, and while making a speech in the South Pacific made a statement that has since become part of American English; “You’re all a bunch of Happy Campers! Happy Campers you are! Happy Campers of POGO POGO!”

Have you ever seen a real Polynesian? No? Most people from the South Pacific are BIG PEOPLE! The image of our former VP, 5′ 8″ or so, looking rather like an anemic Robert Redford, standing in front of a bunch of those folks all dressed in traditional garb, calling them “Happy Campers of POGO POGO,” just grabbed me somehow.

I got to thinking about what kind of boat would these Campers use while happily doing whatever they do. Now while this boat has far more in common with a Yankee trading schooner than a Polynesian dugout, the thought is what counts you know. Think of this boat as what the Campers might have used after the missionaries had been there awhile…..

Regardless, the result is this boat, named HAPPY CAMPER OF POGO POGO; or simply POGO for short. Simple and stout, gaff schooner rigged to give lots of strings to play with, heavily built of plywood, not only would it be a gas for an adult, but it would be a fine boat for a young Happy Camper or two to mess around with and learn sailing in. Of course age of a Camper is no consideration. The original was built by a grandfather in Oklahoma for use on a local lake. Jim can sit in his schooner with his little grand-daughter and in his mind’s eye the cornfield on the shore can become a tropic Isle. That’s a fine use of a ship like this too! His is painted up like a 17th century Privateer, and even has a small canon on the fore-deck. And someday I want one, and I’m going to rig it with square sails too; maybe 3 yards on the main and two on the fore, a longer sprit and 2 maybe three jibs. Why not! 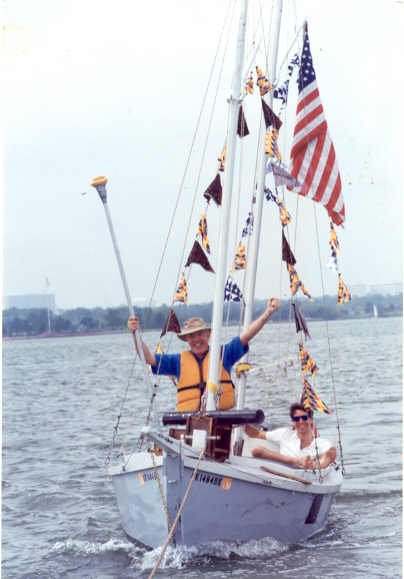 But I see POGO especially good as a boat for kids. Unlike most new small boats, this one is a little ship, capable of handling semi-protected waters safely. It has a sailplan that would teach a kid how to sail, capable of all sorts of combinations.It also has a definite personality about it, something lacking in far to many small boats today. It’s very traditional, in some respects similar to small working boats of 100 years ago.

One very important aspect of this design is that it’s very simple and cheap to build. The entire boat is built from lumberyard wood. POGO is VERY rugged! Frames are 2 x 4, keel is 4-by, outside ballast is cast from concrete and scrap iron, and planking is two layers of 3/8″ plywood covered with glass cloth and epoxy. The construction style is identical to how bigger boats are built and the scantlings are the same as many boats 10 feet longer. POGO is small enough to make him an easy winter project and if you build POGO you’ll have the experience and knowledge to successfully build many of my larger designs.

Back when I was a kid I had an 8′ sailboat; an El Toro. I got it because the hydroplane I built in Jr. high school shop flipped on it’s first trip and my parents made me trade it off for the sailboat. In the summer, my mother used to drop me and the boat off at a huge local reservoir. As soon as she’d leave I’d buy cigarettes and Oreo cookies, and head off-shore. She’d pick me up 2 or 3 days later. I stayed “off-shore”the whole time, drifting at night, sailing along all day. In retrospect it’s amazing I wasn’t drowned because that was a big lake that could get pretty choppy. A boat like POGO here would have really been something back then. Sometimes I think about getting a kid for my youngest dog, and if I do, I’ll definitely build it a POGO.

Many plans for this boat have been sold. Mike Hicks, in Northern Ireland, did a beautiful job of his. That’s it at the top of this page. He sails POGO off the Irish coast and reports the boat sails great, and tracks well enough to tie off the helm. In 1996 Mike is taking POGO to the big traditional boat show in Brest, France, where we think the unusual seaworthiness of a boat this size it has demonstrated, good handling and sailing ability, rugged good looks (hey; I ain’t impartial afterall!) and simplicity of construction will make the little guy a hit! 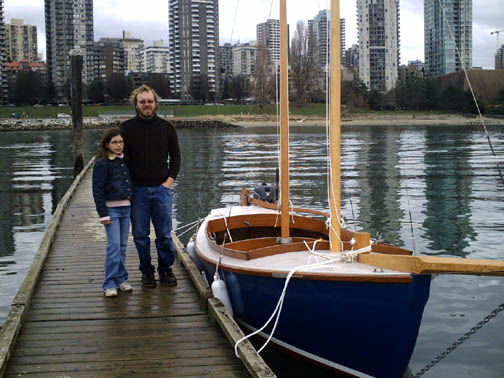 On March, 2007, I got this letter and photos from Llew Hebbard, in British Columbia. As you can read, she worked out great!

I wanted to write to let you know that I have finished building my happy camper. I started building June 10 2006 and after working evenings and weekends launched her February 17. I built the hull as designed, 2 layers of 3/8 marine ply covered in epoxy and glass cloth. The hull I fastened with galvanized boat nails and bolts. I also made all the hardware of steel and had it galvanized. I built it right side up in my garage. I was impressed with the boat beyond my wildest expectations the first time I sailed her. I expected to have to make some kind of adjustments to something or other, but none were needed. She performed beautifully, perfectly balanced with the slightest bit of weather helm. She is a little tender when you stand on the gunwale, but stiffens up quickly when she heels. Something that really amazes me is that seems to sail when there is no wind, and with a moderate breeze she flies, but still remains stable and easily controlled. The way she is built she should be around for a long time. Her name is Blueberry. 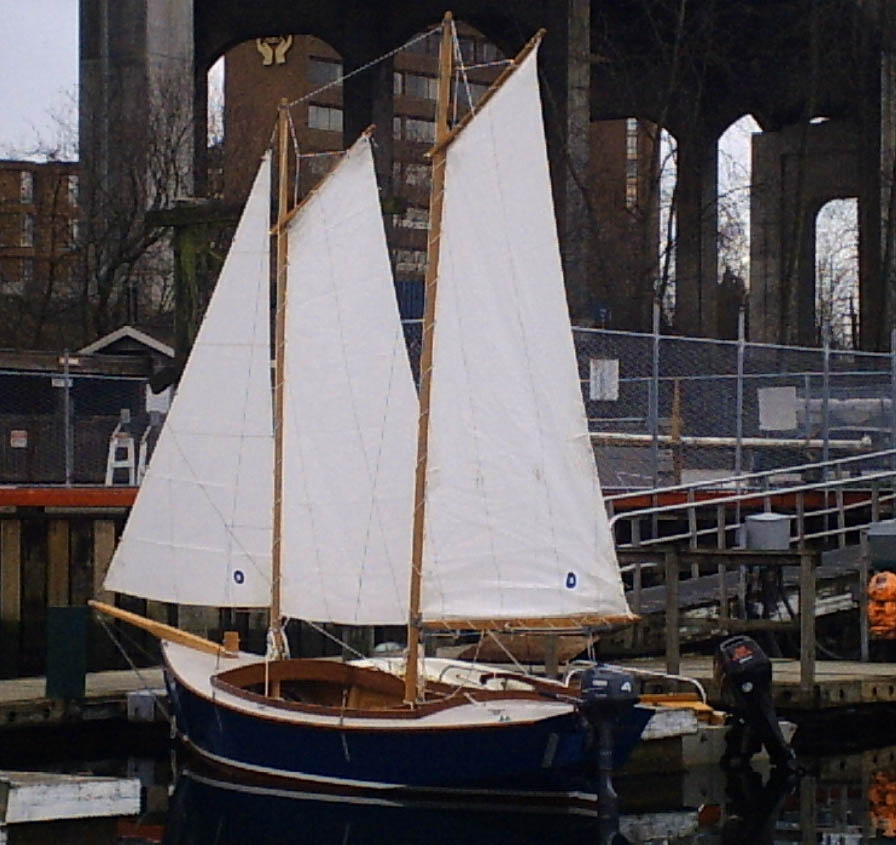 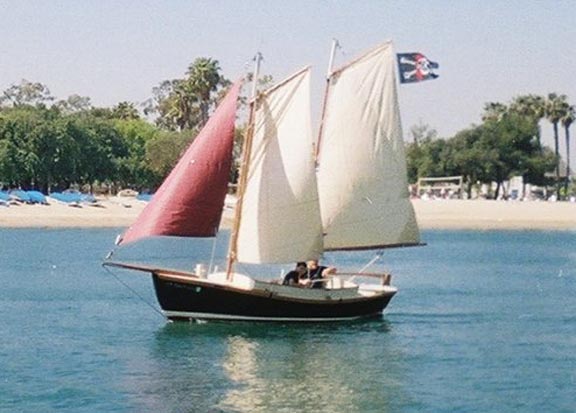 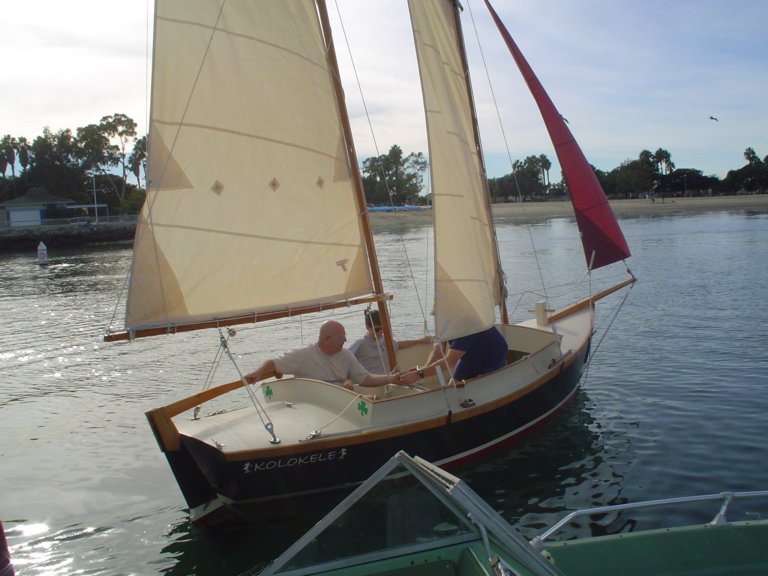 Attached are some photos of my Happy Camper of Pogo Pogo cruising in Alametos Bay, Long Beach, California. We had some nice wind, a beautiful blue sky and a perfect day. Building and sailing thePogo has been a dream come true! I have had to bug to build areal honest to god sailboat since I was a little kid. When I was in sixth grade I went to the Alhambra Library and took out a book on boat building. All of the fancy vocabulary and line drawings when right over my head. I was daunted. I never lost the dream though and when I came across your building book I knew I had the key. I ordered the plans for my birthday to the chagrin of my wife. I built her piece by piece by following your drawings and directions. I made a lot of the metal parts including the keel bolts, drifts, chain plates, and mast partner. I planked the hull with two layers of 3/8″ MDO and shaped the masts from 4×4 fir. Building the Pogo was an extremely satisfying experience, and now I get to share my excitement about sailing with my children.They are very impressed when they see the yacht club guys change course to take pictures of our little pirate schooner. I named her KOLOKELE, which is my sainted mother’s name Dolores in Hawaiian.

Thanks again George! Keep up the good work.

(I gotta raise the price on these plans……) 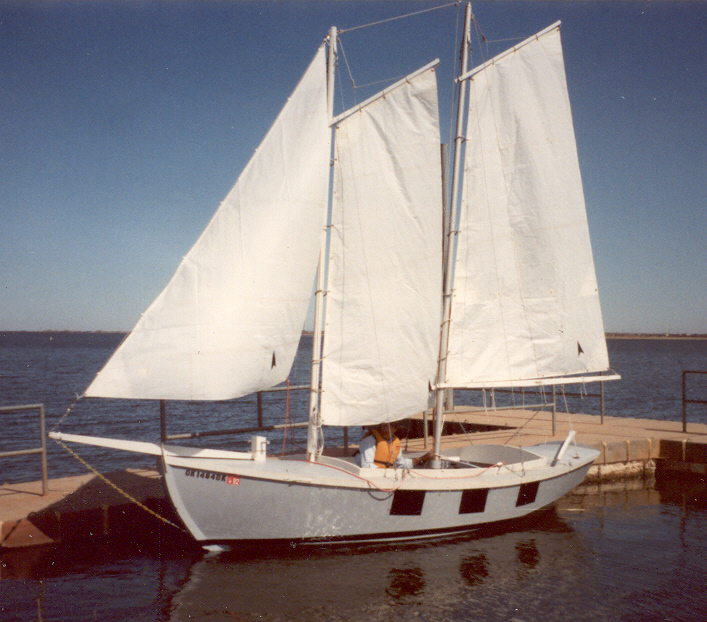