7/2014 Charter cruises on this boat (“DARWIN”) on the Kalamzoo River, in Michigan! 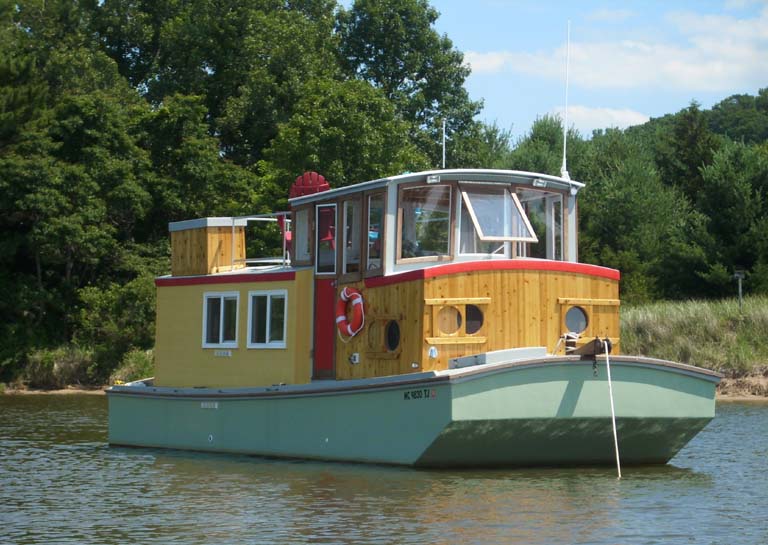 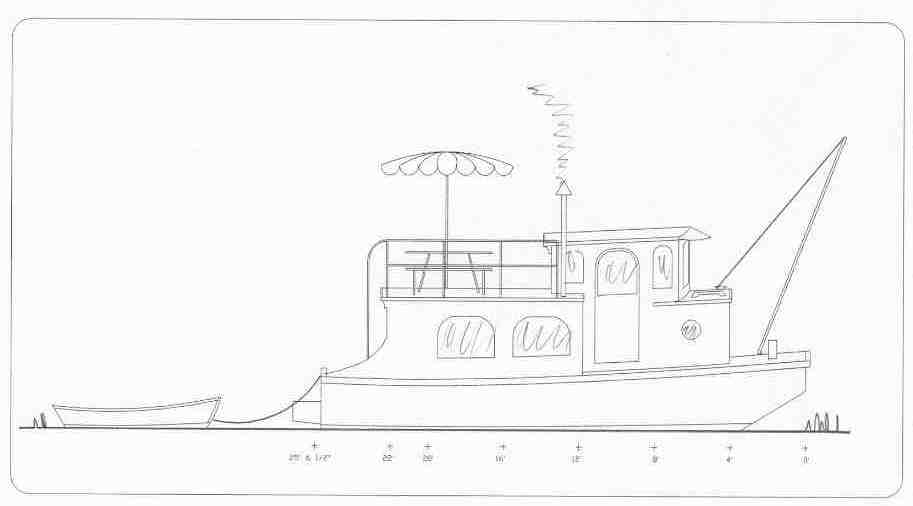 Here’s the original. The photos show her stretched a few feet and slimmed down 1′, a good change. I’d make her 30′ and be tempted to make her 9′ wide so I could trailer her semi-legally.

About once a year I drive along the Washington side of the Columbia river, from Vancouver to the coast. About 20 miles down from sprawling Portland and its suburban areas the country becomes rural and quiet, with tiny towns and old farms and it’s so quaint and pretty and well, Music Man “Americana” if you’re old enough to know what I mean, and before you know it you’ll be humming old Woody Guthrie songs; “roll on Columbia, roll on…” and so forth. The river is immense, but there’s lots of stuff to explore on this part of it because there’s all sorts of islands and channels cut along side, and if you let yourself forget that the river bottom is radiated from leakage at the Handford weapons grade nuke plant up the river, that creatures with two heads are swimming below the surface, and the people living in houses built on top of soil dredged from the river channel are dying of leukemia, why it’s quite beautiful. And safe, as long as you don’t go in the water or eat a fish from it.

I’ve always thought it would be fun to have a shallow draft houseboat to explore this area over a summer, and when my friend Brad asked me to draw him a motorized houseboat for use on the big river, I forget its name, that flows through Cincinnati, I immediately thought of my long time interest in floating the lower Columbia. As opposed to the upper Columbia which calls for a different type of houseboat which RUFUS fits the bill for. Actually so would this boat I suppose….

The idea is a cheap plywood motorhome of the water sort of thing. It has a warm pilothouse with good visibility and a 3′ wood spoke wheel like a good riverboat must have. The forward house is devoted to the bathroom; if you’re spending vacations aboard it’s more pleasant if you have a separate area for a shower and head, isolated from the main living area. You’ll see some little production cruisers with forward cabins smaller than this that sleep 4 people PLUS have the head. It don’t work, unless you’re 3′ 9″ tall. Me, I’m a 6′ 190 pound (sometimes) westerner and I require room to turnaround. If there is such a thing as hell, it must be a place where you have to live in a typical plastic production boat interior….

Anyway. The main cabin has a kitchen with a propane range and usable counter space. The rest of the space is devoted to seating, bookshelves, and a huge dinette table that converts to a monster bed at night. This is a good use of the space. A small place like this can’t waste living area. Having the bed double as a table or couch may seem like trouble, but it really isn’t and it allows you to have BOTH a big dinette area and a huge bed. We own an antique wood railroad caboose sitting right on the beach sand on the Washington coast. It has the almost the same interior as this, and it’s quite comfortable. 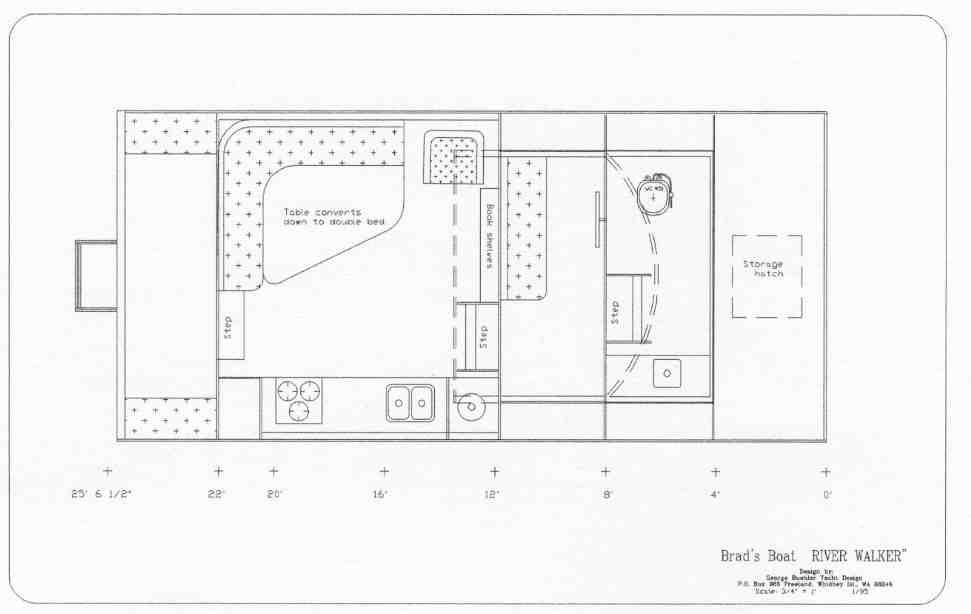 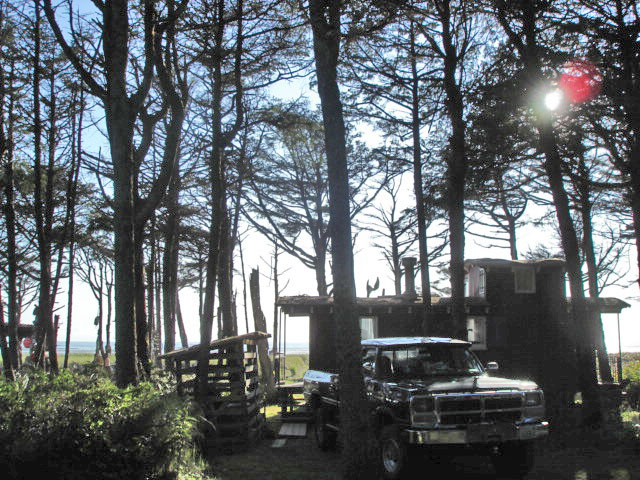 If the “Coupala” was the pilot house, this caboose we used to own would be about the same as RIVER WALKER, as these photos show!

Moving topsides there is a small aft cockpit.A ladder leads up to the roof where there is a picnic table and umbrella. Access to the forward deck is via the wheelhouse’s side doors, and in the bow there is a long gangway controlled by a boat trailer winch mounted on the wheelhouse roof. This gangway lets you anchor nose to the shore making it easy to board or exit the boat. It also can serve as a diving board, although I wouldn’t do that in the Columbia if I were you!

Perhaps Brad’s river is cleaner. It, or was it the one in Cleveland; I don’t remember but one of them mid west rust belt miserable climate area’s rivers, actually caught on fire in the late 1960’s.Really. The RIVER caught on fire. That got the attention of most people in the area; that rabid environmentalist president Richard Nixon passed the Clean Water Act, and today it’s a little cleaner. But of course they had it easy; paint, oil, pesticides, sewage, PCBs and other industrial waste don’t hold a candle to our Columbia’s radiation. I don’t know if that can be cleaned up…
This boat’s concept calls for outboard power because that is the easiest to install and allows you access to shallow water without the worry of damaging underwater running gear. Besides, an outboard on the stern takes up no room at all.

Ideally two small “sail drive” type outboards of 10 to 15 HP would be used, but one alone will work. These are high torque little engines made for pushing displacement type boats.They usually have alternators on them so you can charge your batteries, and many today are even four cycle. My friend Jim has a heavy Bayliner cabin boat this size. When his $14,000 225 HP JUPITER outboard blew up with not that many hours on it, he started using the boat with just a 10 HP “sail drive” outboard. He’s powered it most of the way to Alaska and back like that, quietly, running at about 7 knots which is a civilized speed, burning hardly any gas. He then trailered it to the Mississippi, launched, went through The Keys, up the Intercoastal, into Canada, then down the Miss again to his trailer. He used two 25 HP Hondas for that one…..

The only reason I’d like two of them is for back-up since I’d hate to be way up some lazy radiated river with a dead motor.

The plans for this boat can be modified without much fear of hurting anything,; this is a very low tech ship. For instance, I think she’s to wide and if I was building her I’d narrow her down to 9′ 6″ max. That way you could trailer it without the expense of an escort. She’d be fine if she was longer. That’s easy todo, just set up the frames 6″ or a foot or whatever you want, further apart. You could install an inboard if you wanted, although it will be in the way. Perhaps the best way to do this is with a vee drive, mounting the engine in the stern. I wouldn’t suggest a normal “outdrive.” Those things don’t make sense when applied to low HP and displacement speeds. It’s pretty hard to beat the modern small outboard for reliability and value for cost.And of course, you can change the interior anyway you want! Making things exactly the way you like them is part of the fun of building your own boat!

The first of these boats was built by Thomas Bennett, in Morrow Bay California. He was going to take it up to Lake Shasta I seem to remember. Assuming there’s any water there today, that would be a great lake for her. In fact Lake Powell near Las Vegas would be too. As the city sucks that huge lake down to nothing all sorts of neat canyons are coming back to view, and this guy would be a fine tool for exploring it all.Here’s photos of Tom’s boat. Note he had the nerve to change the profile. Oh well, I’m used to it and of course that’s one of the reasons to build your own boat. She can be what YOU want! Here’s what Tom’s boat looks like.

If you’re brand new to boatbuilding I want you to stop, take a few deep breaths, and repeat after me; “this ain’t no big deal. This is just a plywood box. I will NOT get carried away.”Now, get a copy of my building book, “BUEHLER’S BACKYARD BOAT BUILDING.” You can find it in most libraries and better bookstores or you can order it mail-order from this magazine. Read what I say about plywood. I also recommend Glen-L’s PLYWOOD BOAT BUILDING. Me, I’d use MDO single side plywood, and no epoxy coating. The hull would be two layers of 3/8″. This will cost more than ACX, but MDO don’t need an epoxy or polyester coating; my MDO lapstrake Chris Craft is over 30 years old and still in fine shape; no plastics. There’s no reason you need to spend a great deal of money on materials. This barge boat offers the potential for a great deal of recreational pleasure for a relatively small amount of money, as long as you don’t get carried away and start building her like she was some sort of classic racing yacht. She ain’t. She’s a plywood box. 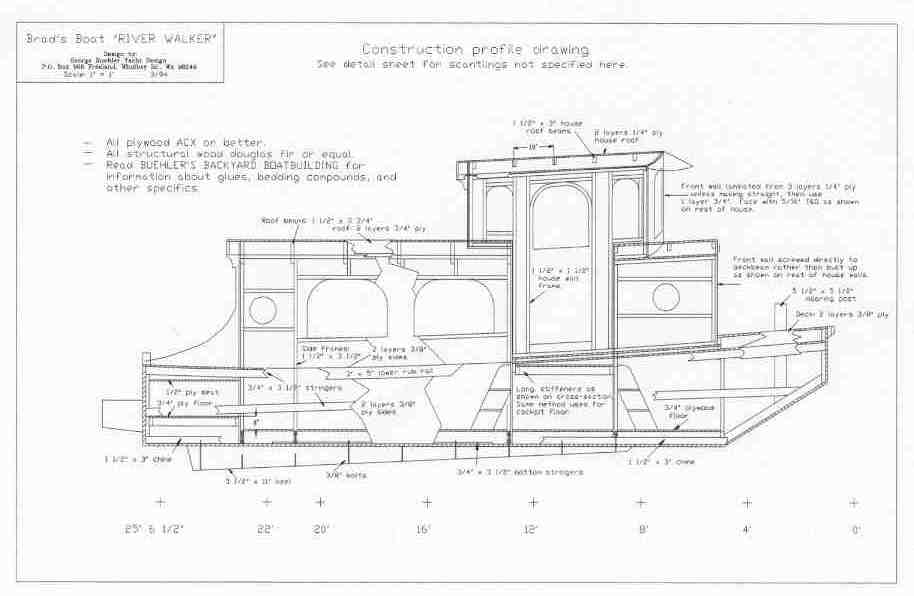 Anyway, I think the thing is to build her upside down although I’ll tell you right now I do NOT have much of a clue about how you’ll right it other than by hiring a boom truck. That costs 80 bucks an hour where I live. If you do it some other way write and tell us how it worked. Or I didn’t, anyway, until these photos from Chris came. The boom truck is simpler…..

Chris stretched her out to 28′ x 10′ which is a good idea. It will make a real difference in the interior.

The materials specs are given at the end of this article but I never did work up how much of what you’ll need. It’s always a good idea to first make a model. You can measure each piece that goes into it and make a very accurate materials list. You’ll also see just what goes where.

As I said earlier, when you assemble these frames consider making them narrower. I really think a 9′ beam would be plenty; it will cost you some interior space but it will make the boat trailerable and more manageable under power, if that matters. If you’re building it for just one place then what the hell, make her full width. The biggest downside is it might be harder to sell it, but I’ve discovered if you worry about resale you’ll never get what YOU want….

All lumber is normal lumberyard dimension and speced here as sold in the lumberyard. Ex: 2 x 6 is sold to you as 1 1/2″ x 5 1/2″. But, if the specs say a specific dimension; ex: 1 1/2″ x 3 3/4″, I mean that so saw down or laminate up whatever to get that. Use fir, yellow pine, or whatever you can get for the framework, within reason. Do not use Hemlock or some of the “white” woods unless you can’t get anything else, although these woods can be used inside where they stay dry. They don’t last well in damp conditions but coating them with epoxy helps. Using a “better” grade wood is usually cheaper and easier than messing with chemicals.Pressure treated southern yellow pine is inexpensive and will serve for all structural parts. 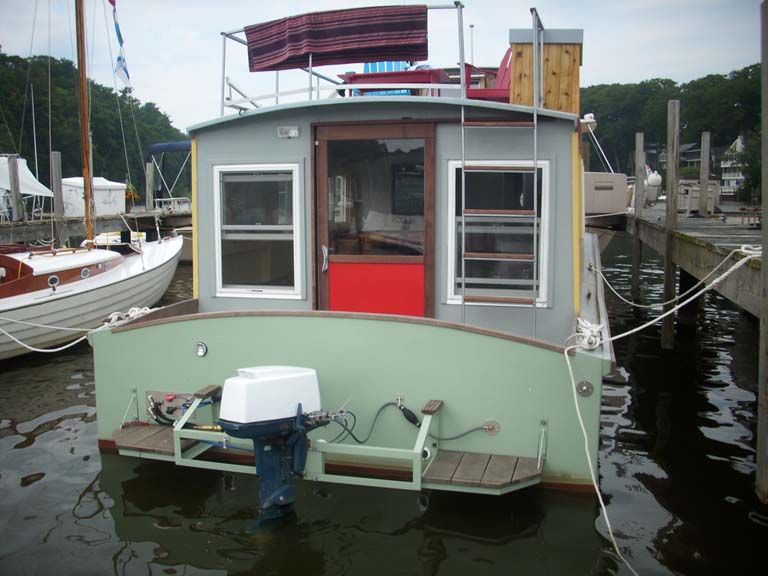 Chis has since replaced that old outboard with a 40 HP Honda, which he says easily pushes and controls her. 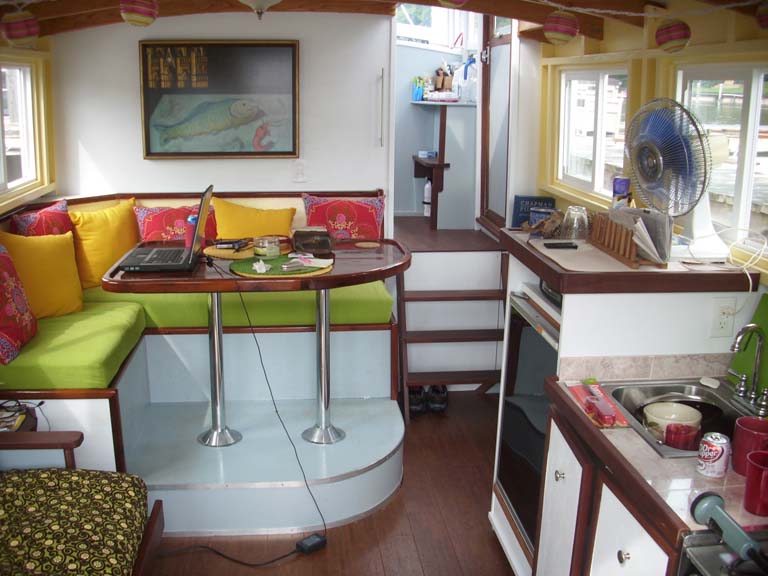 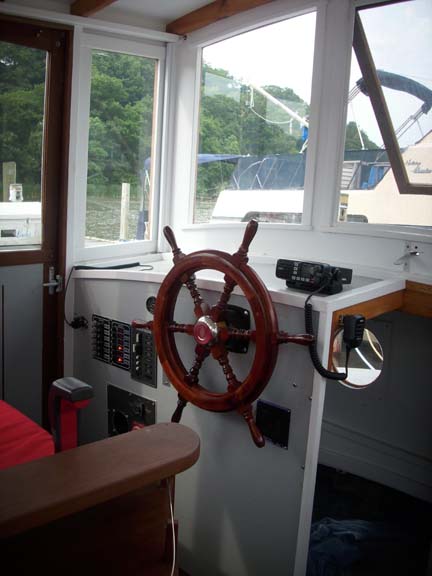 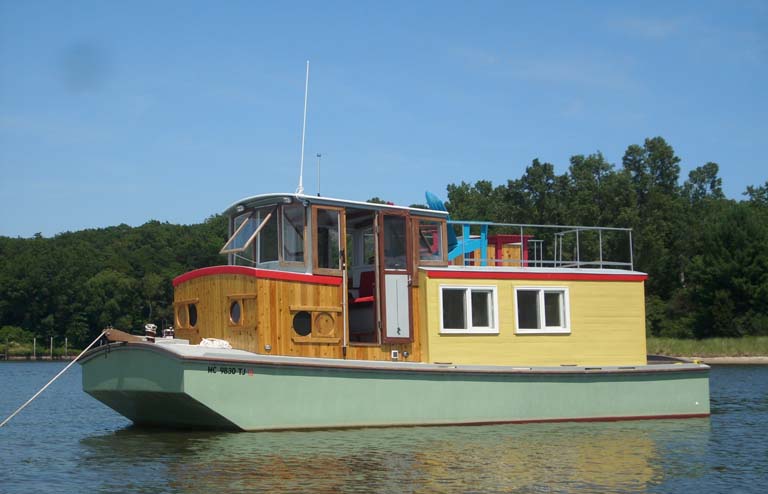