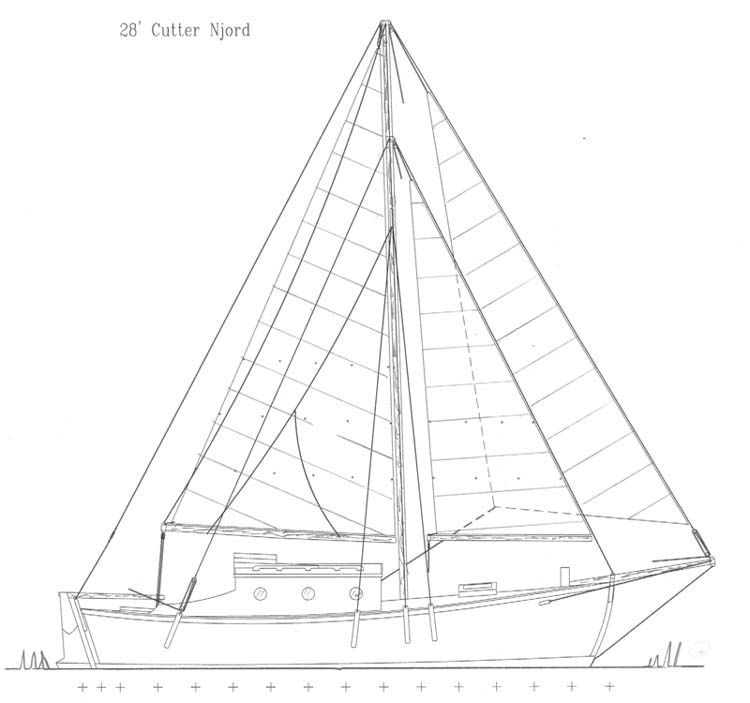 With substantial freeboard and a moderate rig, NJORD is a good choice for a single hander or friendly couple who are on a budget but want a safe and reliable cruising boat.

Somebody sent me a wooden boat forum discussion of this design and I was surprised at the negative talk. Few understood the concept, nor the thoughts/experiences that went into her.When I drew her, I was thinking about Jean Gau, a French guy who did 2-1/2 circumnavigations in his 30′ Tahiti Ketch “ATOM”before crashing on a Virginia beach, in 1971. He was 69. NJORD, like ATOM, is very rugged, has a sailplan that an aging guy can usually handle, and can carry light weather sails if wanted. WhenI was in my 20s single handing a boat this size I fell off once while off Big Sur, managed to grab the backstay as I went, and swung aboard without getting my feet wet! In my 30s in the oldJUNO I was hit by a serious squall, had the boat go right on its side, with me holding onto the mast with one arm while my body and legs were 90 degrees to the water. I’d hate to try either today. Forgive this sea story stuff but those thoughts/experiences are what are behind this design, which I thought had been made clear in the upper paragraph? Oh well, it doesn’t matter but I’m sorry folks without short handed cruising experience can’t visualize what this boat is.When I was in my early 20s I designed a 26′ cutter. I built her while working a menial job and I cheerfullycruised to Mexico and Hawaii with her.

One thing led to the next and in my thirties I designed another one I called HAGAR. I thought she was an improvement on the original. I thought she’d be a great boat for an adventurous young couple or a single hander with “short pockets.” Broke, in other words. Then in my 40s I designed an improvement on her called EMILY. This is still a fine little boat but she is still a bit cramped. Aging sure brings changes. I hope I never get so”old” I can’t get enthused about a design for people who are what I used to be; full of enthusiasm to go cruisin, willing to nail up something to do it with, but lacking in both funds AND patience. Now in my 60s I thought I would revisit the idea, but make changes more suitable to somebody less energetic and enthusiastic. Me.

NJORD is the result of these thoughts. She’s meant to be a 21st century version (not replacement!) of EMILY. She’s about the same length and beam but a bit wider at the waterline, has more freeboard, about 6′ headroom depending on where inside you’re standing, and fuller ends. She displaces 50% more (she’s heavier) and while won’t sail as well in very light winds, will stand up better to normal winds. Her additional volume will make her far more comfortable than the previous two to spend time aboard!OK I admit it. I’ve gone soft! 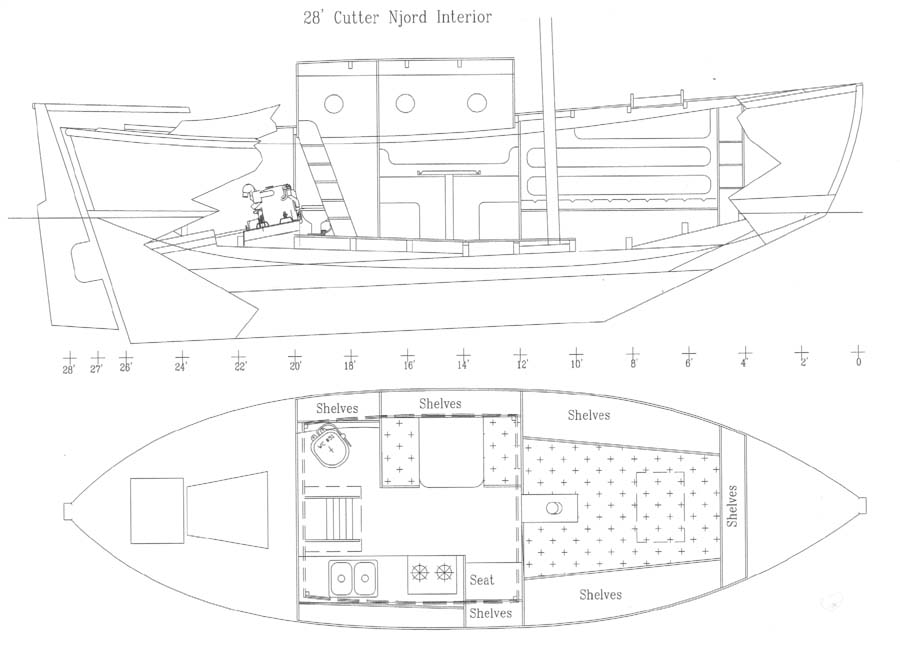 She has the same cruising interior as EMILY but more elbow room.

Her interior is laid out strictly for the housing of a friendly couple or a single hander. She has a galley with a usable counter, room for a stove and oven, a head that a HWP person can just fit in, a dinette table that sits and feeds two, and lots of storage areas. I drew in a little 14 HP diesel. Even if you don’t install the engine, and cruising without an engine wasn’t all that rare before maybe 1970, I suggest you prepare the keel for the shaft because I suspect if you don’t install an engine now, you’ll soon wish you did and will later! 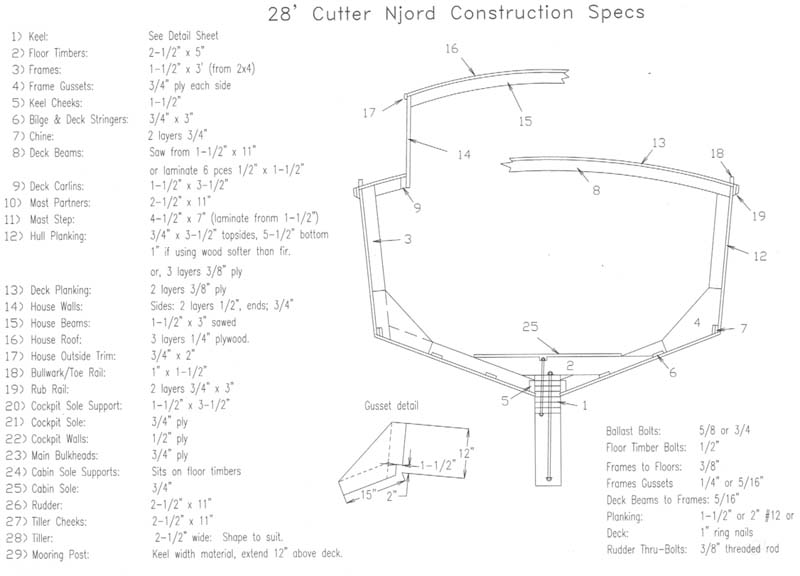 Simple construction all based on normal lumberyard stock.

Everything about this design was based on simplicity.Originally she had a curve to the stern stem which looks great, but complicates the assembly and makes hanging the rudder a little trickier. After some thought, I grudgingly gave her a straight sternpost figuring it fit the simplicity theme better. It makes her look a little plain in the drawing but won’t be a big distraction in real life. It allows the stern to be more vertical, getting the prop deeper as well as making the back of the rudder easier to attach a wind vane on.