7/2014 a great review by Donal Philby sent to me by Scott McPherson, lifted from a chat site…. 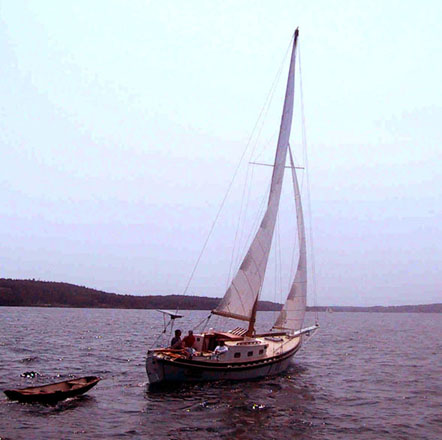 While this is an older design she’s still one of my favorites in her size range of anything around. Strong statement, I know, but who cares.

JUNA was designed as a close copy of JUNO, a boat I designed and built back in the 70’s (see Wooden Boat Nov.’87). JUNO worked just great, and after I sold her served as a traveling doctor’s office in Alaska for over 10 years. However, old JUNO was just a bit tender initially, and JUNA takes the same ideas that made JUNO so successful, but has a bit firmer mid-section and higher aspect sailplan to make her more weatherly, a bit flatter run to make her faster, and is a couple feet longer for the beam which makes wrapping hull material on even easier along with giving a trimmer shape and a little longer waterline so she moves easier.

She is as simple to build as a seaworthy, ocean going boat can be, and can be planked wood, plywood, or steel. She should be able to be built quite inexpensively if you follow my suggestions and keep things simple. And that reminds me of a funny story…..

I originally drew this design for a Design Contest for Cruising World magazine, back, I think it was, in the late 1980s. I wasn’t so cynical back then, and actually thought they meant what they said in the rules. The object, they said, was a cruising boat designed for a young couple “just starting out.” For the reasons described above (to stay brief!) I thought this boat was a natural.

Well, she didn’t even place. The winner was designed by a New Zealander, who said he thought his fantasy could be built for under one quarter million dollars. I wrote to one of the judges after that and said; “good thing ya’ll were lookin for a boat for a young couple just startin out. God Forbid had you aimed for a “mature” couple with a savings account….”To his credit, he wrote back saying he was embarrassed about that himself…. Oh well.

Her basic hull shape is balanced and symmetrical ended which assures predictable behavior. She has a good deal of reserve buoyancy in her flared form, and it will take close to 3,000 pounds of provisions to sink her from her “vacation” trim of 2″high, down to her cruising waterline (shown on the sailplan view).

Her interior is set up to be comfortable for two, with a real galley, a large double bunk, and lots of storage. Her dinette will convert to a “guest bunk”. Her short house can be extended if you want, but as designed she has lots of deck space to carry a good sized skiff, something few small cruising boats (and some large ones) can do. Besides, the low headroom is just over the bunk, and you don’t need headroom there, and is structurally good. I’ve found this to be an ideal cruising and live-aboard interior. Yes, there’s times when sleeping in the bow isn’t the most comfortable but you know, even Joshua Slocum was at anchor 90% of the time and the rare time it’s uncomfortable in the bow, then sleep on the couch. Or the sole even. But go ahead and change it if you want. Part of the fun in building a custom boat is setting things up just as you want them!

Her cutter rig is very strong, and still simple and inexpensive. Her sailplan is very versatile, and can easily be single handed. The bowsprit has a tackle on it so you don’t ever need to go out on the end if you don’t want, yet at the same time makes anchoring easier, and gives a “J” to carry a huge light weather sail if you want to. I’d go with the Marconi version because it’s so simple but a gaff version is included with the plans too, so you decide.

Since I’m the designer you might want to take what I say with a grain of salt. But, I’m very pleased with this design, and don’t see how you could do better for a medium sized cruising boat big enough for a couple to be comfortable on, or for single handing. She is easy and inexpensive to build, very strong and safe, good looking, and sails well. 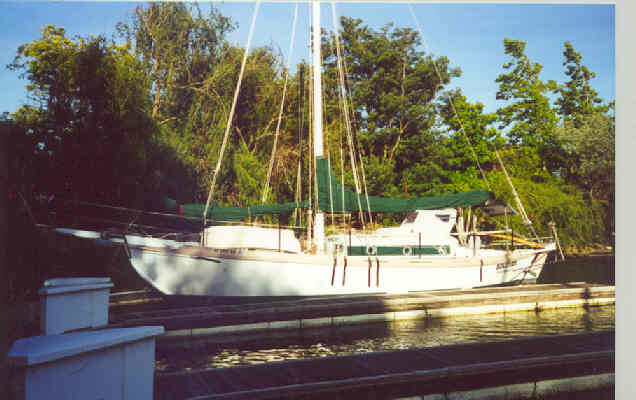 The photo above is of a California JUNA, built of plywood. Her owner sailed her in a 1600 mile circle out in the Pacific single handed. He hit one storm where the boat was under water half the time, but she did fine. He said if there was any complaint, it was that she went straight all the time and didn’t turn quick. But of course, the only time NOT going straight easily is good is when you’re in a marina, so in other words, she is a great cruising boat. Her builder got married and sold the boat, and below is a review I saw by the new owner….

We own the Juna (Solitude) pictured on Buehler’s website. We bought her last year and sailed her down to San Diego and are working to fit her out for some years of cruising.

High comfort. The boats I have sailed with similar comfort level are the Sea Witch gaff ketch, an Atkin Eric, and the replica of America. I have also crewed on race boats from 30-70 feet and no comparison. They are too jerky for anything but day races. Very quiet inside. Where we bought her in the Sacramento Delta summer temperatures reached 110?. Inside the cabin, it never topped 80. A couple nearby said they couldn’t go inside their plastic cruiser until after dark.

Speed: Reasonably fast. I haven’t felt like we had any handicap for cruising. We do need to build a drifter and that will help. She goes right through chop. That is far different that the last boat we had, a Flicka, which is quite fast except for chop, when the beam and bluff bow makes it labor. We took the Juna out the Golden Gate in a southerly wind against an outgoing tide. While it wasn’t comfortable, we never had that feeling of someone slamming on the breaks when we plow into a wave. Nice skinny bow just splits the water.

One day coming down the coast we were doing 4.5 knots with bare pole and 6.5 with just a double reef staysail. Quartering the large swells (a surfer aboard estimated them at 15 feet) was comfortable. No fight. No great desire to broach.

She never jerks upright. Solid mast and box steel keel with dense ballast. Not as stiff as the Doug Peterson design I’ve been crewing on, but that’s for a different purpose, a different compromise.

Room: The boat is not vastly roomy. In fact, in doing a bit of thinking about the interior, I discovered that there is just slightly more room than the Pardey’s Taliesen. Rather than an 8′ bow sprit, our Juna has two feet more overhang and a six footer. The stern doesn’t need a boomkin. Waterline length longer. But interior room about the same, despite 37’8″ LOD.

Security: There is something about the boat that is very comforting. Everyone who has come aboard remarks on it, without prompting. The hard thing is not to just go below and sleep. Partly that is the nature of heavily built wooden boats, in my limited experience. Good vibes.

Other Designs: We considered buying the steel 50′ Otter shown on the GB site. I have never been in a boat which was more comfortable for living aboard and cruising. It would be my ideal compromise between sail and power.
General observations: Almost any boat can be made expensive or cheap. We’ve looked at a Taliesen replica that cost the owner over $200,000. It never did go cruising. It was a piece of fine furniture. Do you want furniture? Or do yo want to do cruising? Sure, both is nice–if you can pay the price. Read the Griffith’s book Blue Water. Here’s someone who built a ferro boat in six months after wrecking a wood boat on a pacific reef and sailed it three times around the world. If you love boatbuilding, there are numerous lovely challenges for craftsmanship. Pick one of those. If you have to build yourself because of budget or just want some pleasure without obsessing, then the Buehler basic designs should be considered.

Yes, we lust occasionally for the room in a flimsy, high freeboard Hunter (especially just after hitting head on the low overhead forward!). But we didn’t have to sell the house and invest all the savings to own her, either. Indeed, rental from the house should fund many years of modestly budgeted, yet comfortable and safe cruising.

The fellow who surveyed the boat for insurance said it was the only boat he’s ever surveyed that he’d willingly take around Cape Horn. 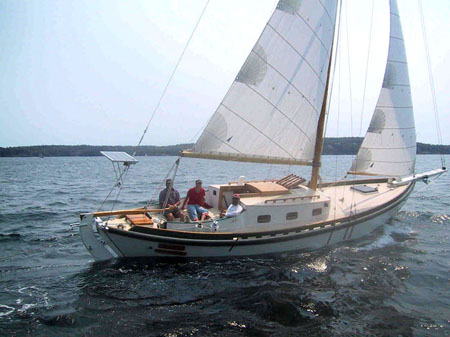 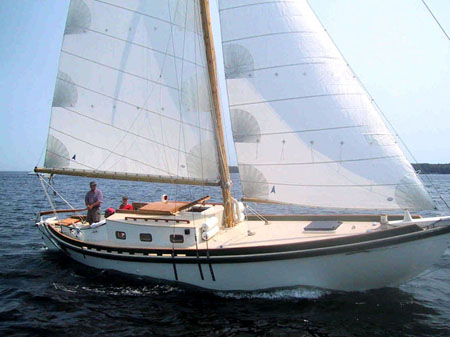 More shots of Jay Hoagland’s JUNA. She’s just launched, and doesn’t have her jib leads hooked up yet. 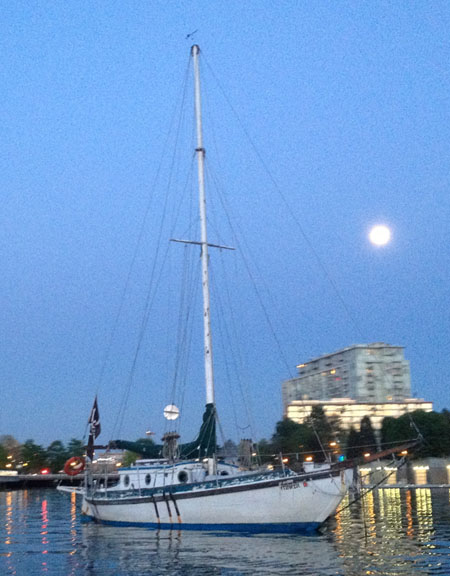 Photo of a JUNA sent to me by Tim Twilley. 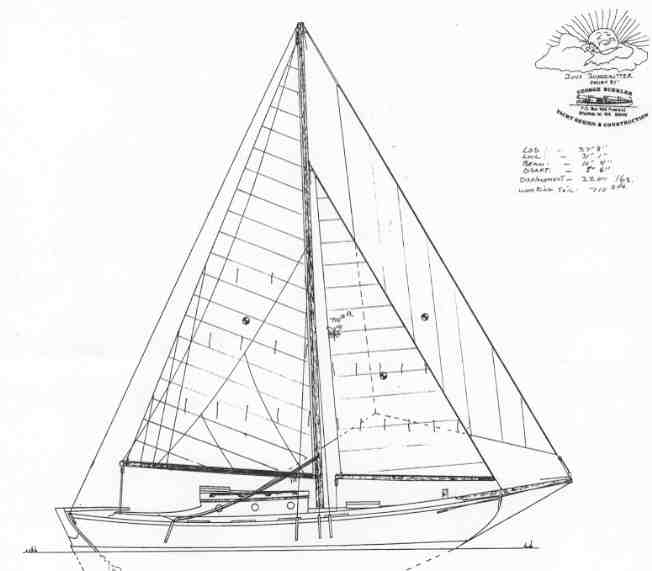 The Marconi Cutter version would be my choice because it’s so simple. 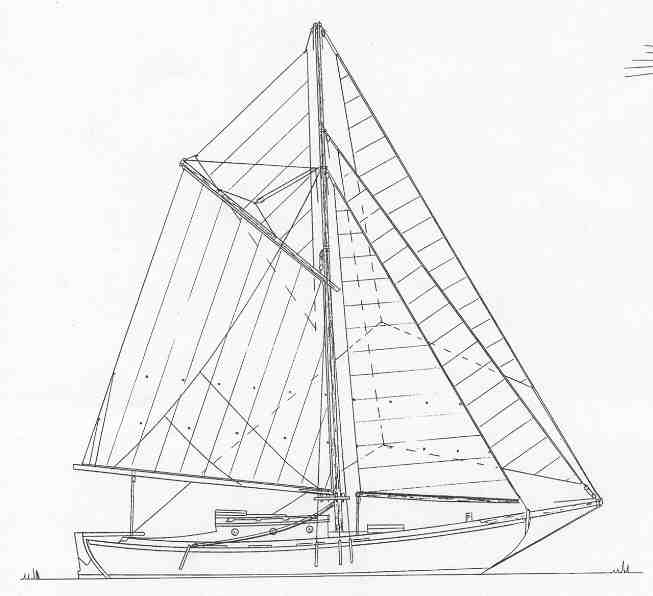 She looks pretty good as a ‘gaffer too! 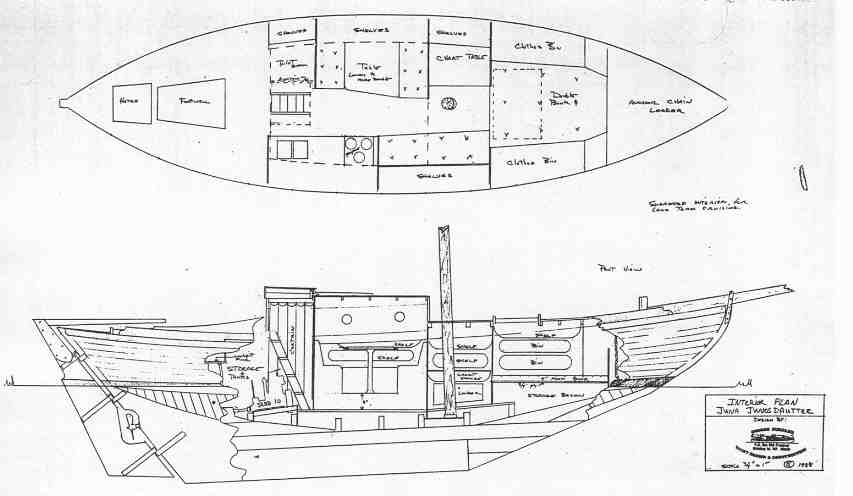 You can of course set up the interior any way you please, but this is a great layout for a couple, comfortable for cruising as well as living aboard. There’s tremendous storage and plenty of “elbow” room. One change I’d do is “loose” the chart table and make a good hanging locker in it’s place, maybe even a small fridge (I’m getting soft). This drawing shows one of the reasons I got into CAD. I was a very fast hand draftsman, but not all that neat…. 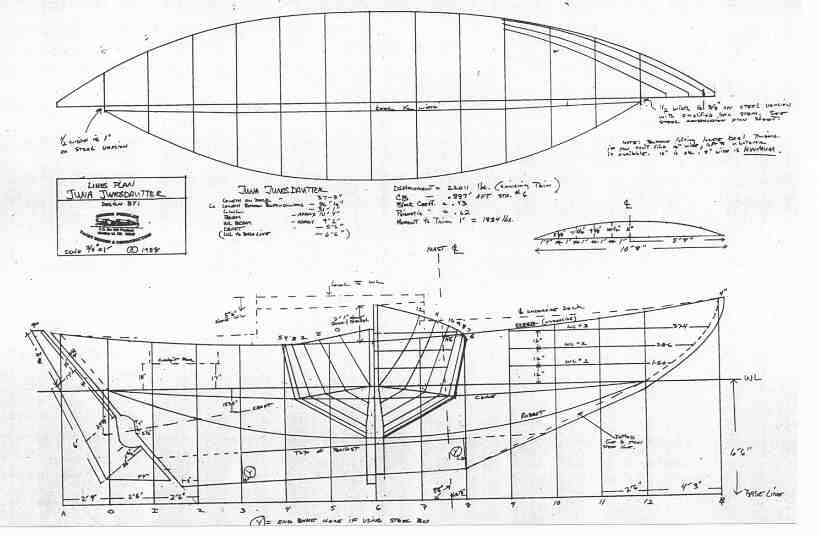 JUNA’s Lines Plan shows curves that are easy to wrap material around. I gave her the straight stern post to simplify planking and rudder hanging, but, it just doesn’t look as good as a curved stern. You’ll see the curved stern on the sailplan drawings as well as Jay’s photos. It’s a bit more trouble but worth it. 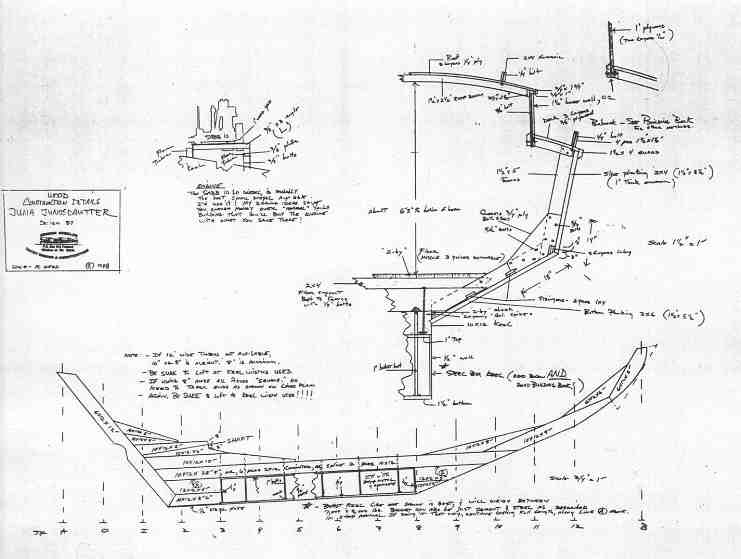 She’s an ideal hull for wood construction because of her single chine and smooth curves. She can be planked with 2x4s, or, built of plywood. The plans also include a steel construction plan. 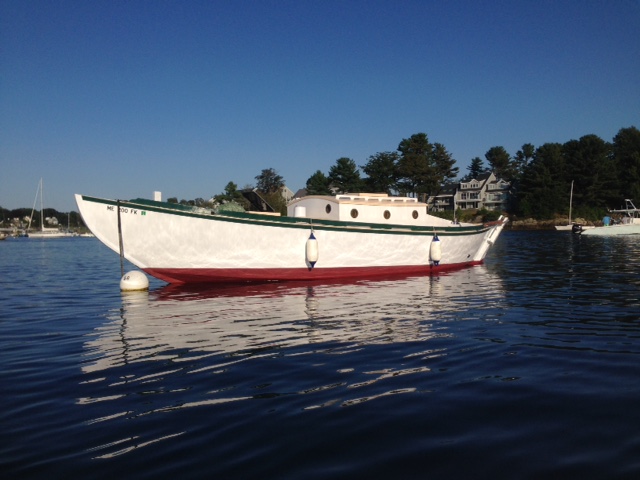