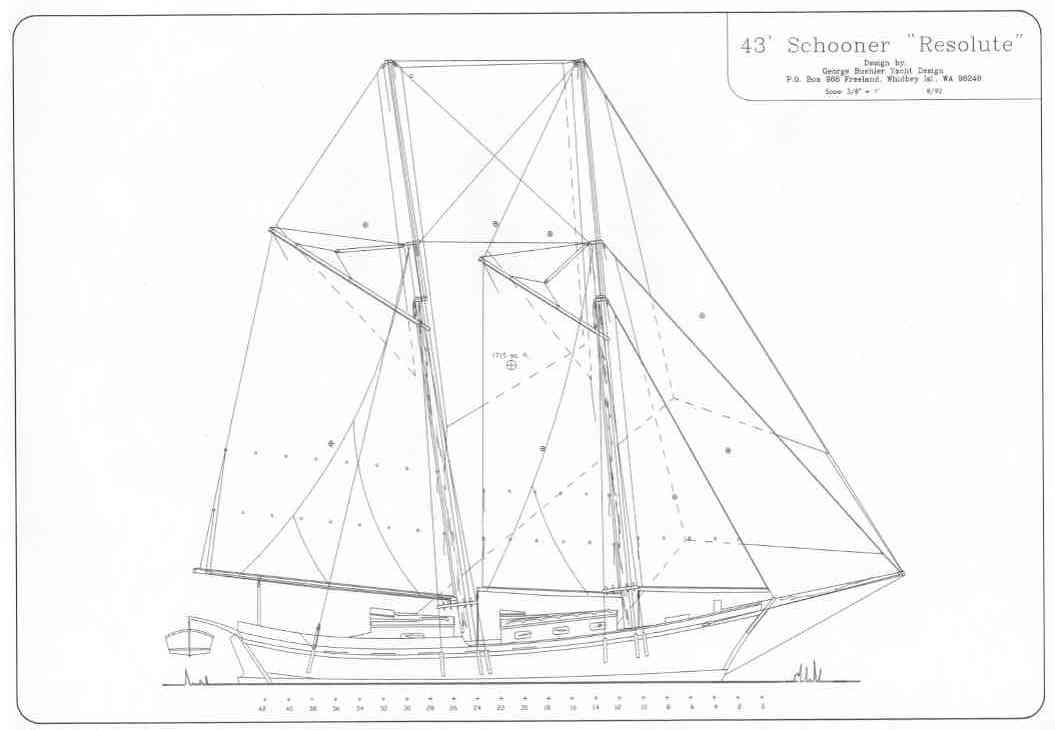 The sail plan is about as complicated and cumbersome as you can find on this size boat. 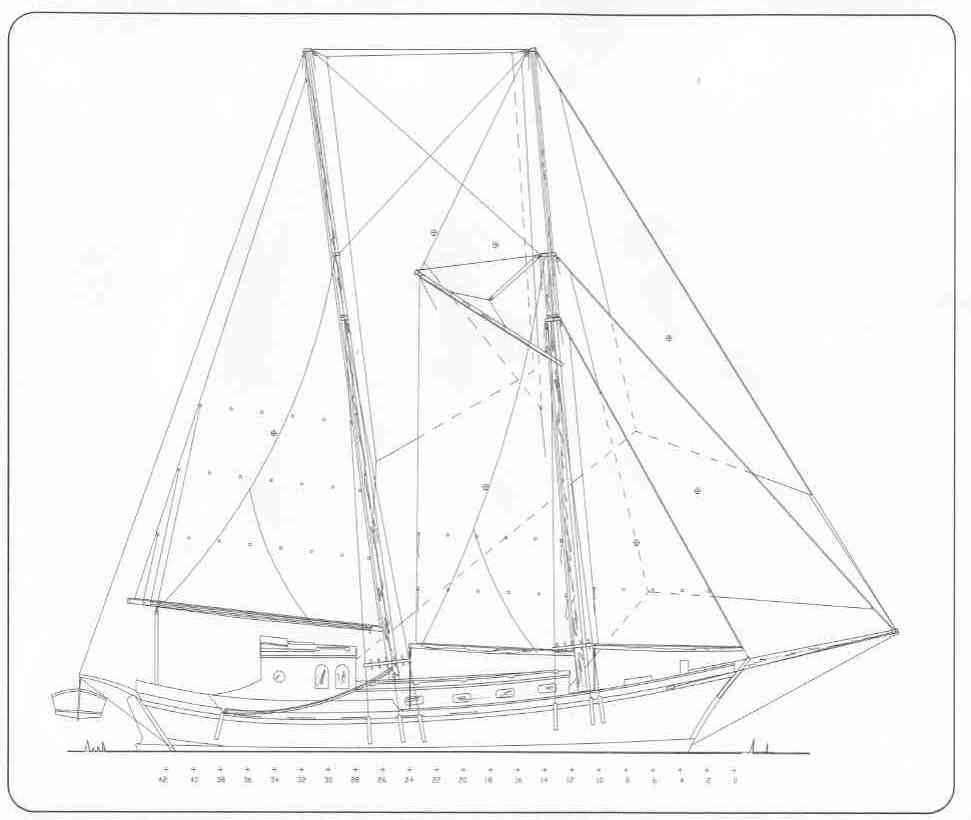 Here’s a bit simpler rig and a pilothouse. I never did an interior for this version.

Bush’s speech January 10, 2007, where, contrary to the advice of almost the entire General staff, much of the Congress, and almost 70% of the US population, he announced a “surge” of 20,000 more troops into Iraq. Hmmmm. Reminds me back to the late 1960s early 70s. Back then a “surge” was called an “escalation.” And before Johnson and then Nixon were through, they had murdered over 58,000 Americans, wounded and in many cases paralyzed, burnt, lost limbs, blinded, and so forth another 200,000. And of course we killed around 2 million of them Vietnamese folks. Hey but who counts them? So far, at this writing Bush has only killed 3,006 US folks, wounded (read paralyzed, burnt, lost limbs, blinded, and so forth) 22,000 and killed 600,000 or more Iraqis. Hey, but who’s counting? Certainly not Bush nor the republican congressional members, today in the minority finally. I believe of the republicans, only McCain has a child over there. He spent Viet Nam bombing peasants on the ground before he ended up in a prison camp. Maybe that’s why he supports the “surge?” He’s one of the very few republicans who ever served. Except of course Senator Hagel. Man, listen to him talk! One of the very few republican sin government today who ever did serve, he’s a decorated combat vet and pulls no punches which of course is why the establishment republican party hates him… Perhaps if Bush and a few other republicans had served, been over there on the ground, they’d have a bit different opinion of war? Even if they had children there maybe! Say, what are the Bush daughters up too these days? Too many people in the US have a picture of war based on WW11 movies staring 30 year old 4-Fs like Reagan or John Wayne…..

Anyway, this 44′ schooner was designed for a man in Michigan who plans on spending his summers in the Caribbean pretending he’s a buccaneer. Granted this sounds rather suspect to us levelheaded worker bees, but he’s not going to hurt anybody. He just doesn’t have much of a work ethic. He earned that right as a paratrooper in Viet Nam. He got seriously doused with Agent Orange and when I was working with him back in 1991, he had some concern about his long term health. So many parallels between Viet Nam and today, aren’t there…. Hey, but the good news is the US military is stretched so thin they’ll take guys up to 42 years old and don’t worry about high school diplomas or minor criminal records.They’ll pay you a $70,000 sign up bonus even, so if you make it home in one piece you’ll have some decent change. Foreigners actively encouraged! If you make it back alive you can become a US citizen!The downside of course is you must go over to somebody else’s country and occupy it. Most folks don’t take kindly to that so there is a certain occupational hazard to it all, if you can ignore the human side of course. Oh well.

The concept here was an inexpensive and rugged boat that could be left unattended for long periods, like 8 or 9 months out of the year.

The hull is a simple single chine, built of multiple layers of plywood covered with epoxy and glass cloth. This form of construction is ideal for tropical use. It doesn’t have the abrasion resistance of steel, but other than that is preferable. It doesn’t condensate inside. It doesn’t rust. The epoxy keeps it from rotting and protects it from worm damage, so the boat should be able to stand living in the tropics without undo maintenance concerns, certainly less than metal. It’s also an ideal material for an unskilled amateur to work in. Individual pieces are light weight and easily handled. 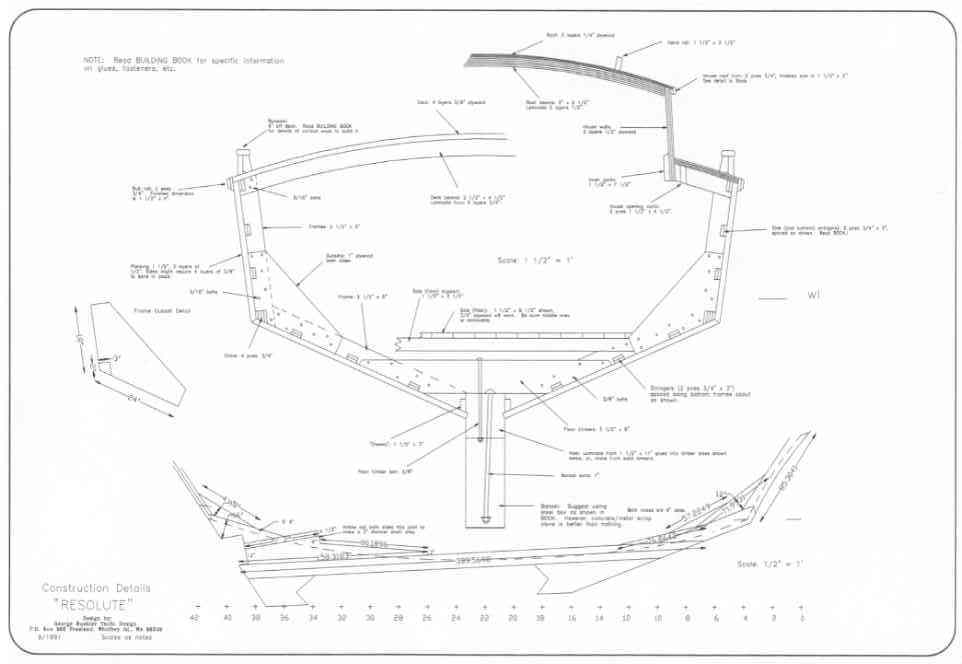 The plywood hull, epoxy and cloth coated, is a “wood butcher’s” delight because no highly skilled fits are required. It’s hard to go wrong! Plans will be available in steel too, when I get around to drawing them. The steel version will have lines that show a straight stem rabbet (but not cut-water)and straight stern sections to simplify building, although you can certainly use the wood lines if you want! Looking at her16 years later I’m wondering if maybe she should be a foot and a half or so beamier. All that crap in the air looks heavy! I think I’d leave off the fore top mast and make the main hollow if I was using the marconi rig. If you buy the plans I’ll redraw the Lines to make her wider if you’d like. 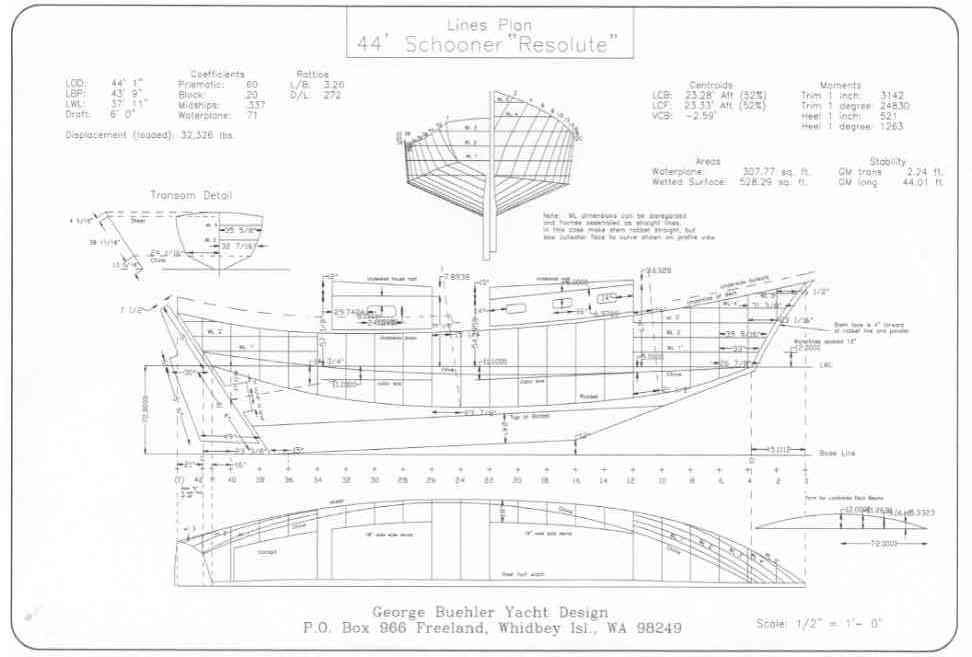 The sail plan is about as complicated and cumbersome as you can find on this size boat. I thought adding several square sails to the foremast making her a brigantine would be a good idea, complicating things even more, but was vetoed by the owner. For now. Maybe he’ll add the yards later, once he learns how to handle things as they are. Ken’s a big strong guy. He was a paratrooper a long time ago, and a guy who isn’t scared to jump out of a frigging airplane into combat surely isn’t intimidated by something like a little gaff rigged schooner, and might just be crazy enough to re-rig her down the line as a brigantine. 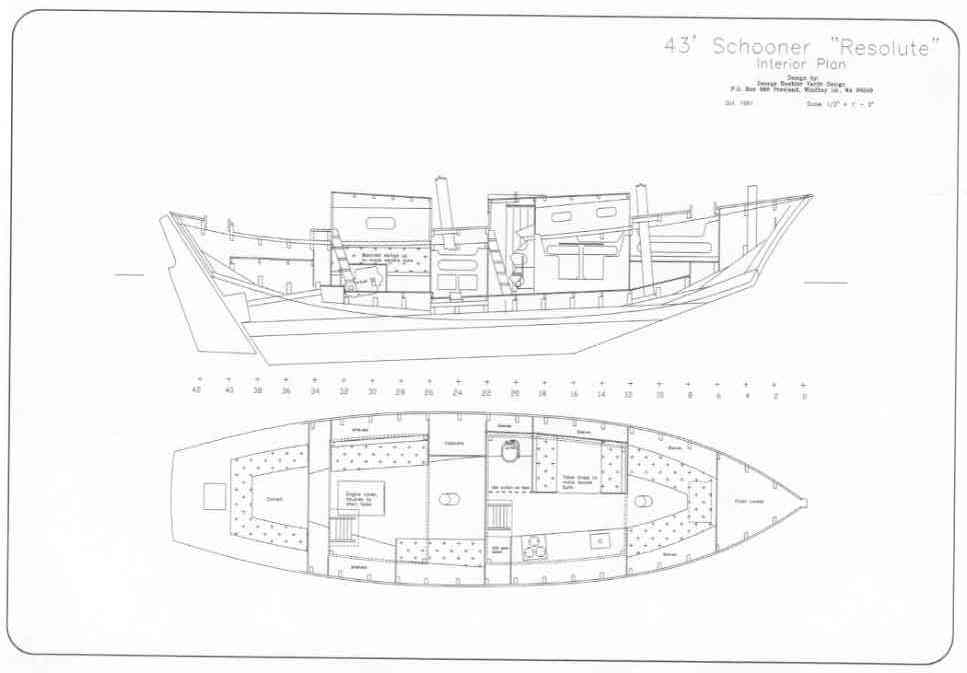 Not all that inspired but it’s good for the vacation use planned for the first one.

The interior is set up for groups of people to vacation in. This isn’t a real live-aboard interior. The boat will be used in tropic weather mainly for day trips and one or two day jaunts to new islands. Most living will be outside on deck and on the beach. So the boat is set up to sleep up to 7, although 2 couples is preferable because the two cabins would give some privacy foreach. There’s a very large galley and good storage.

Writing about a boat like this is hard. Design reviews tend to brag about how wonderful a new design is; how competitive in racing or ideal for cruising or whatever angle the designer is pushing. This boat is just for fun, a miniature ship, affordable by most, buildable by many.