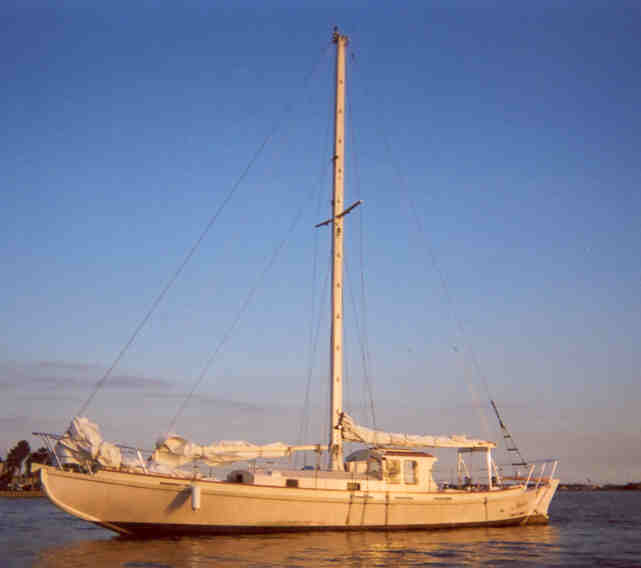 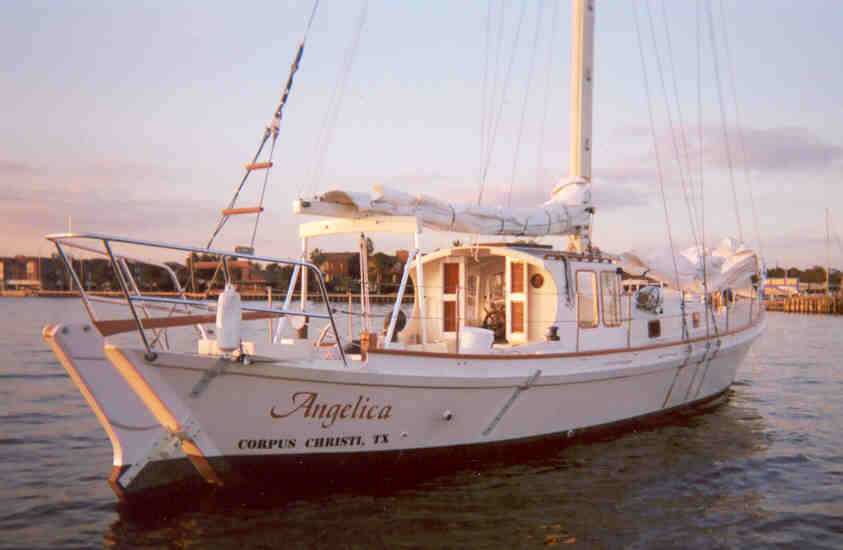 Here’s a sister that is the pilot house version, built by Jim Dell, down in Texas. He did a beautiful job. Following are two emails he sent me about her. Here’s the first: “Hi George, Well…she’s a boat. First sail last weekend. Took awhile to get to it because I had to replace the Perkins with a one lung Yanmar 12 hp. Perky had a cracked head and I couldn’t afford to fix it. ANGELICA is, as advertised, very easy to drive. She’s your Dragonfly design if you had forgotten. She’s also, again as advertised, initially tender, but I’m adding, peicemeal, concrete and steel. She stiffens up nicely, though, before she gets too far on her ear. She tracks magnificently, balances wonderfully easily, at least in the light winds I’ve tried her in. She does indeed ride like a 57 Buick and has a pleasant roll motion. The tiller is almost self tending in a tack once you get her combing around. Not the most responsive tiller, actually. We’ll see onceI get some speed on her and get a couple more square feet of rudder as I get the water line down 6 more inches. The big and only real bugaboo so far seems to be the bucking of the rudder in a seaway.Is there a traditional fix for that you can turn me on to? “

I forgot what I answered but here’s his next letter. ” Yah, George, The Yani moves her along fine in flat water, even with a inch too big prop and questionable rings. The head is new. Burns a whopping pint an hour probably. Oh, and the bottom is quite fouled. The copper powder impregnated epoxy didn’t work. It’ll make a good base for some real paint, though, combing up in Dec. She aught to be REALLY slippery then. Haven’t pushed much wind or waves, yet, with the engine. Yah, when motoring in flat water, it’s almost a hands off the tiller affair, with the occasional touch up, with little back pressure. Even my 5’2″ honey was steering with one cute little foot and a big grin. She only wanted to bale once, out on Galveston Bay in 15 knots and a chop when I hoisted the full main and we went over on her ear. That ended real quick. Went to a beam reach on stay sail only and all was well again. Not the best conditions to introduce both my wife and new boat to the joys of sailing, as I remembered them in the Sea of Cortez on my Pivers. But it has, after all, been six years. Of course, you can use any of this in your web site.On the wheel steering, I don’t know if you remember. I have setup a traditional wood helm on 8″ bronze drum in the pilothouse. Haven’t gotten around to cabling it up yet. We took some paper pics last weekend and our daughter will be scanning them this weekend. I’ll have them send some off to you.” Did you catch what he said; a 12 HP Yamar with the wrong prop gets her around! I’m thinking my Seagul outboard off the rudder idea maybe wasn’t so hare-brained after all? Hmmmm.

Here’s the last letter. The tenderness IS part of the concept. You see, when cruising, you simply do not point because healing and banging into it is way to uncomfortable. That’s why I, against the advice of most sailmakers, always spec 3 or more reefs fairly closely spaced rather than two widely space dones. It allows you to reduce the canvas in small amounts and always be efficient. This boat is meant to easily move on a reach or more and that, she does, spectacularly. Note the comments about well she tracks….

.……….the pilot house actually is working out just fine. Had to put something over the engine space, anyway, unless I went to the schooner or maybe center cockpit. The interior is fine, too. Built it pretty much as you drew it. I guess you don’t probably hear that very much. The little engine that could is great. Pushes her along just fine, though I haven’t had to claw off a lee shore in a blow yet. A bit “vibratey” though. Loosened the mount bolts. But at a quart per hour I’m saving my pennies for a new 2 cyl Yanmar. Rudder is fine. Just need to get some way over it’s surface. Which brings up the one real problem I’m working on. The tenderness. She doesn’t standup to much wind close hauled. But I came from mostly a tri background. I got rid of the training wheels and will master her. And it doesn’t take a lot of wind to move her right along. Put concrete and steel in the bilge. And am contemplating adding a lead shoe to the bottom of the ballast keel. Had her hauled out last week. You would have been gratified at the continuous flow of interested folks. Seems a lot of folks are hankering for tradition and simplicity. Been relating with a starry eyed young couple down from Alaska who purchased a JUNA, I think it is, in steel. What a piece of junk, the poor kids. Workmanship was horrible, I mean BAD. But they want to take it to Alaska and study the natives for a couple of winters. I think you told him he was crazy. He thought that was a badge of honor. I’ve been supportive. Going on my first offshore mini cruise to Corpus Cristi next week. I’ll let you know how she does. Jim

This is a bit odd of a design in that there isn’t much room inside for the length. It all depends on what you want, I guess. This boat’s concept is that while 30′ is big enough for a couple to cruise in, there’s no elbow room. So, I took a fat low 30’s footer, but stretched it to 50′. The longWL lets her move very easily and get by with low sail area. There’s lots of storage. There’s a spread out comfortable interior for two, but room for overnight guests. There’s two foot wide side decks to make movement aboard easy when dealing with sails.