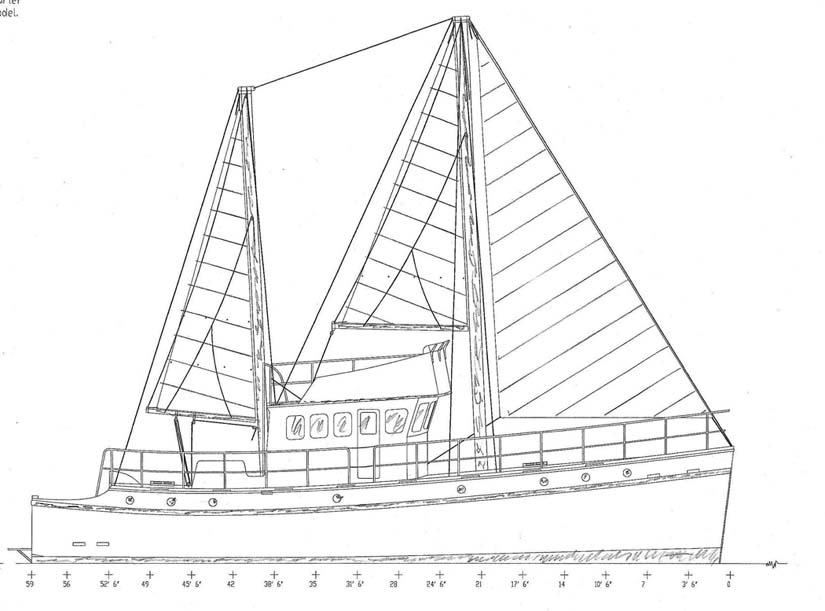 The idea here was for a big simple and rugged boat that the owner and another couple people (if wanted!) could go pretty much anywhere for fishing. The owner is a pretty serious ocean fisherman you see. Of course you can go fishing on any boat, but this guy has an actual fishing cockpit close to the water, with a transom door to make it easy to land large fish as well as easily board a skiff from the big “swim platform. “Plus there will likely be a deck crane on the big flush deck in front of the pilothouse which be used for stowing and launching a 14′ shore boat for fishing tide flats and shallow bays. This boat has the same basic functional look of the DIESEL DUCK boats but its size, 59 feet, allows some interesting possibilities that can’t happen with the “sugar scoop” stern of theDUCKS.

Unlike the DUCKS, this boat has the bedroom area forward of the pilot house. “Common Knowledge” says beds forward are uncomfortable at sea, but that would rarely be an issue here. The boat’s 50 plus ton weight means she won’t bounce around much except in the most violent weather, something there is no excuse experiencing if you pay attention to weather seasons. Bad weather happens in definite times of the year. Statistics have been recorded daily by merchant ships all over the planet (and perhaps military, I don’t know) since 1849, and printed on “Pilot Charts” which list the percentages of various weather combinations on every ocean, for each month of the year. So, for example, if you’re off the west coast of Mexico in July or August which the pilot charts will tell you is a dumb place to be, you DESERVE to be smashed by a hurricane! I can’t see this boat being killed by one if she’s well off shore, but it wouldn’t be fun. Besides, even Joshua Slocum spent 90% of the time at anchor. And nobody cruises INTO bad weather if it can be avoided at all.

I often (frequently!) come up with a perfect interior layout only to see an owner change things! That’s OK! It’s your boat so build things as you want! I read that Frank Lloyd Wright not only designed the house, but also the furniture and specified where to put it. That boy was sure full of himself but apparently there are people out there that require that degree of “guidance.” I dunno. I don’t get it, or WANT it for that matter

I show the two galley location options. There’s no need to decide which to use until it’s time to build the galley because each location has strong points! Personally, I like the galley in the main cabin with the area in the passageway used for a chest freezer, washer/dryer, and a work/laundry bench. That allows the cook to be part of the action in the main cabin.

I show two heads. Actually, it’s more accurate to say one small head in the living cabin aft, and a real bathroom forward by the bedrooms.

The living areas for both versions show a “sitting area”with a couple comfortable chairs, book shelves, and a small table between the chairs. The version with the passageway galley has a couch across from the chairs, making the whole area a sitting area for a small group. The downside of this is the cook can’t be an active part of things!

Both versions show a large dinette, more like a restaurant circular booth than a dinette, against the stern wall of the cabin. Between that and the aft head is a short stairway to a door leading to the cockpit. This isn’t possible with the DUCK “sugar scoop”stern with the aft owner’s cabin, which is one reason I like this style stern for large boats. There’s nothing wrong with the DUCK cockpit behind the pilot house, but guess what? This boat has BOTH cockpits!

She has a raised sheer rather than a forward deckhouse. Although on the surface it would seem this makes easy deck movement, it’s actually easier to move around on deck if there’s a low house with a handrail on the inboard side and a station and railing on the outboard side. But the advantage of the full flush deck is there IS a large deck to lay about on, store various skiffs, and of course very important, it looks “cool.” As mentioned before there’ll probably be a small deck crane forward of the pilothouse to be able to hoist a 14′ outboard skiff aboard, something not possible if there was a forward house.

There is a spacious fully standup engine room with space for a bench and cabinets for “dirty” projects!That keeps the passageway counter top free of oil and grease, and gives a specific place free for things like oil and tools.
We were thinking about the IVECO 150 HP non electronic engine.”Hull speed” calculates out at 10.22 knots BUT that requires 226.3 HP, which depending on what numbers you use (a gallon of diesel supposedly gives 18 to 20 HP so I’ll call it19) burns 11.8 gallons/hr, 118 hours on her 1400 gallons, and gives her a range of 1214 miles. Of course you’d need a larger engine than 226 HP to maintain that speed, probably about 300HP, because you shouldn’t run an engine flat out very long.

Lowering speed has dramatic effects on range. Running 7 knots needs 66 HP or 3.47 gal/hr, and gives 2821 miles range, 403 hours on her 1400 gallons. 6 knots is 2.21 gal/hr for 633 hours and3800 miles, and, 5 knots, you burn 1.2 gal/hr, for 1108 hours or 5500 miles. Many powerboat cruisers run around 5 knots. It’s quiet, economical, and easy on equipment. People coming from a sail background know that cruising at a steady 5 knots, especially in a direction you want to travel, is a DREAM! By the way, these numbers assume flat calm conditions and DON”T give any credit for sail assist.

Note the sailplan. I’ve found many people don’t seem to understand the concept of what I call the “Sail Assisted Powerboat,”and install large sailplans that are expensive, awkward to handle, and oddly, designed for pointing ability rather than off wind efficiency. In other words, unsuited for a powerboat!

The rig designed for “sail assist,” such as this one, is completely different. First, it is small. One person can easily deal with it. The headsail could be a handful if not attended before the wind came up much but if you install a large boat roller furler as specified, that isn’t a problem. I’ve seen roller furlers installed that are undersized for the sail they’re supposed to deal with. That’s just a waste of money. It’s better not to have one than have one not big enough for the job. The other two sails are small and attached to booms, so are easily reefed or furled away by hand.

A function of this sailplan is to reduce roll motion but they will also give a little “boost” for motorsailing, and in the event of engine failure will mean you can get to shore somewhere rather than bob around like a piece of driftwood. Asian fishing boats are found once in a while drifting, with skeletons aboard. I just read (2017) about two discovered from N. Korean; one on an isolated Japanese beach and the other out at sea. I’d never consider ocean cruising in a powerboat without some sort of auxiliary sail.

Along that line, I just watched (November 2017) a Robert Redford DVD movie called “All Is Lost.” Redford plays a guy single handling a glass sailboat that wacks a derelict cargo container. Briefly, he eventually sinks and drowns. As I watched, I reflected that such a thing couldn’t happen with a heavy steel boat like this (her 5/16″ hull plate ain’t afraid of any cargo container…) or, for that matter, it would be unlikely with a heavy wood boat too. If the wood boat did get holed, you could probably patch it. When I was ocean cruising, I carried a sheet of ¼” plywood cut up into various sized pieces, with 1″ ring nails started around the edges. I never needed it but, I’ve always believed, “hey, just ’cause you’re paranoid don’t mean they ain’t out to get ya!”