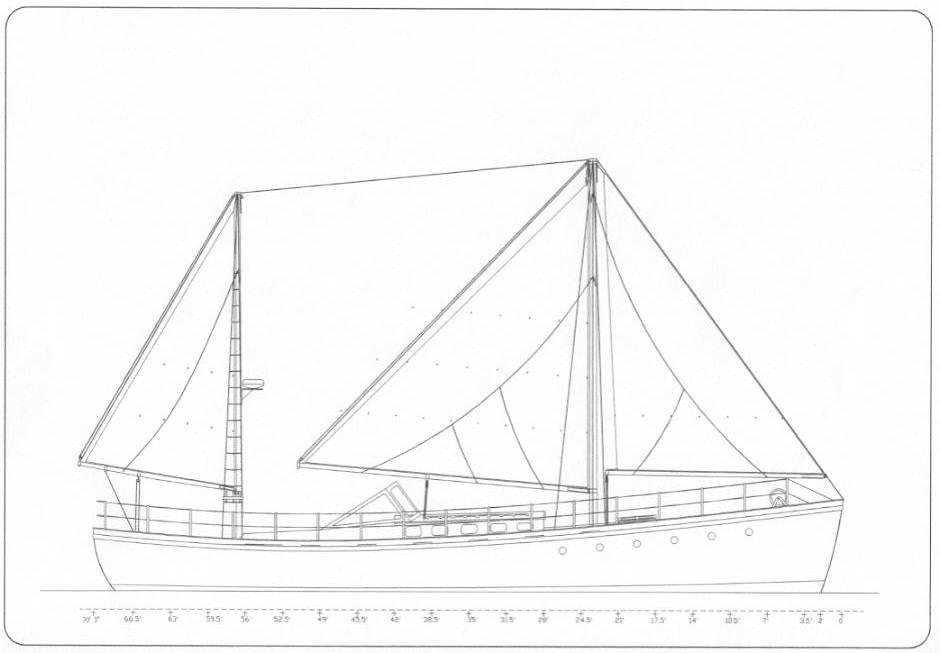 With all the emphasis I put on my designs as comfortable live-a-boards, I’m frequently asked why don’t I live aboard. I don’t; I live in the country on a couple acres. The thing is I’ve gone about all this (as usual) backwards. I had my first boat that I lived on when I was 19. I built one at 22 and spent several years cruising. I built another and lived on it 4 years. I never had a house or property before. I guess I’ve always been a grasshopper; there was never TIME to get serious, you see. But in my design business I meet people very likely like you; as My Boy Bill would say, people who “played by the rules.” People who have been responsible, raised families, had careers. And today many of them are thinking; “OK, I’ve done that. I’ve been responsible, I’ve raised a family. I have some financial security. By Goddess I want to get me a big boat and live on it.” And a lot of them do, either with my designs, or somebody else’s. Of course I prefer seeing them do it with MY designs, but, I enjoy seeing people doing what they want to, regardless. Happy people are good company, you see, and frankly, I don’t have time anymore to deal with folks who are so beat down they don’t dream…..

Anyway, we built a very comfortable small house on one edge of the property. The property is divided down the middle by NW “jungle” so Gail can’t see my end, which is where all the interesting stuff is. Her half is landscaped beautifully; she has her “white garden,” her herb garden, her vegetable and rose gardens. There’s a small “orchard” (3 trees and some blueberry plants that I fight the crows over who gets to harvest it) and even a fragrance garden, if you can believe it. It is very very comfortable. In our house we have my mother’s piano, Gail’s grandmother’s dinning room set and china. Teddy the Love Sponge has his own couch and there’s Persian rugs on the waxed Douglas fir floor. I tell you, there’s time when I think I’m living in a NW version of a Don Blanding poem (go to the library and find him…) Best yet it is paid for, and when the novelty wears off, if we do decide to go cruising again we can do it.

The way I want to do it now is own a large boat, but live on it part time. It has to be simple, not overly expensive to build or maintain, and most important, rugged enough to leave in some fishing port for half or more of the year. Of course any of my designs could do that, but the concept of WUNDERBURG (the name of the supposedly mythical Swedish town where the Wild Women live) is my current, (this week, to be honest) fantasy…..

The idea was a super comfortable and highly fuel efficient craft that was simple and inexpensive to build that a couple or two could travel around in and be comfortable for extended periods. I took the 71′ ELLEMAID’s hull, made a few small changes to theLines, and removed all the superstructure, making an uncluttered and low profile deck plan that will have next to no windage.

The inspiration, believe it or not, was an old Chris Craft SeaSkiff I had until recently. 12 gallons an hour in a 24′ boat finally beat me down, but she was sure fun. The folding canvas top and side curtains keep the weather out, and I comfortably used the boat in all sorts of weather. Look at the stuff the average cruising sailboat owner puts up with, sitting outside steering with a stick. If it got uncomfortable in this boat’s cockpit you’d just hook in the autopilot, set a two mile alarm on the radar, and stay down below.

This boat would be great in warm climates. Imagine the decks covered with wind surfers and kayaks and swim suit clad people. Imagine traveling between the Islands (and to them, for that matter) at 10 knots burning several gallons an hour in a ship this size. The long narrow shape wouldn’t be slowed down by much. My neighbor Fred has a 72′ x 12′ old boat that cruises at 10 knots pretty much regardless of what he’s going into; the boat just slips along.

Since this boat should move so easily and has so little windage there wasn’t need for much power and a 110 HP diesel is drawn in. That sounds pretty small for a boat this size but the “numbers” say it will be plenty. Of course, There’s no reason not to use a bigger one, and she should hit 11 knots with 120 HP, in calm conditions. I think I’d be perfectly happy cruising at 9 1/2 knots at about 2 gallon an hour instead. that extra 1.5 knots takes another 83 HP and about 5 gallons an hour more which doesn’t seem worth it to me….Of course that’s pretty low fuel use fora boat this size. It’s the principal though.

The original version of this boat was sketched out in The Troller Yacht Book but the plans were never completed. You see she looks a little different here than the version in the book; this one has a small deckhouse which allows the main cabin sole to be higher and wider, increasing the interior options.

I gave her a very low ketch rig because it seemed to fit. I call it a 70/30 motor  sailor because it is far more MOTOR than sail emphasis. This is plenty of sail to really dampen the roll as well as more than enough to get home in case you loose power. The mizzen would be used even if there was no mast because it serves as a good riding sail as well as a place to put the radar.

The fwd. Junk mast version was put on for fun. Yes, it will give a bit of pull in a breeze. But coupled with this boat’s unusual appearance it will really make her standout and will totally confuse folks who see her go by. Note I puta hard top over half the cockpit. I like the folding canvas idea but there’s a lot to be said about a true enclosed steering station. I can imagine conversations in the yacht club bar about that”strange boat”…..! 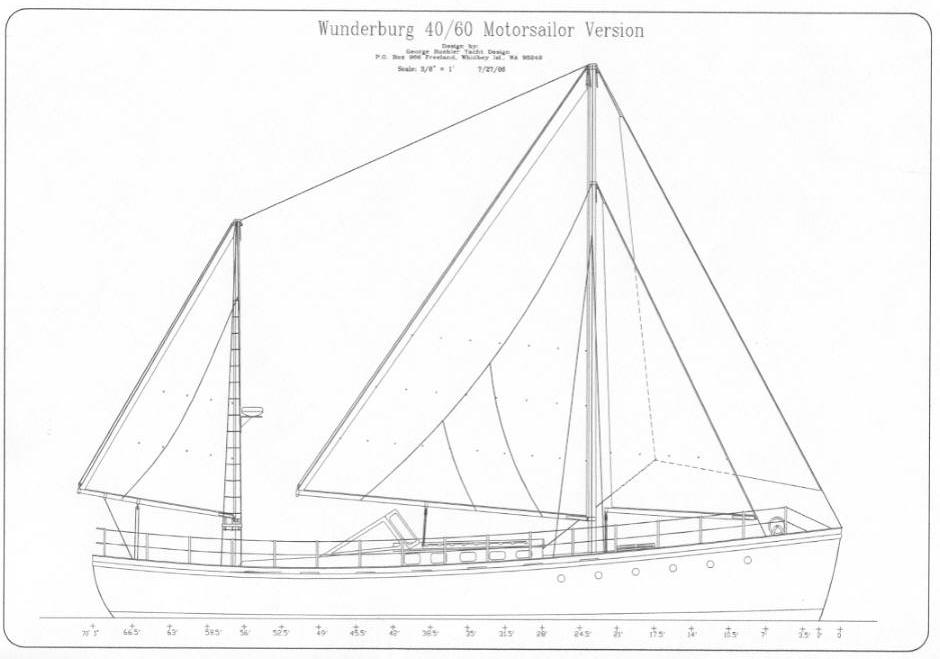 Above shows here as a fairly decent sail motor sailor. I call it a 40/60 MOTOR emphasis to sail. This would sail OK inmost directions yet is still a moderate enough sail area that a couple, or even a single hander, could deal with it.

I haven’t finished the interior yet but will soon and will post it then. Keep in mind if you build a boat you can build in whatever interior you want! The study plans include a sheet that show her top and side views with nothing in her.You can draw in your own ideas and see how they fit. 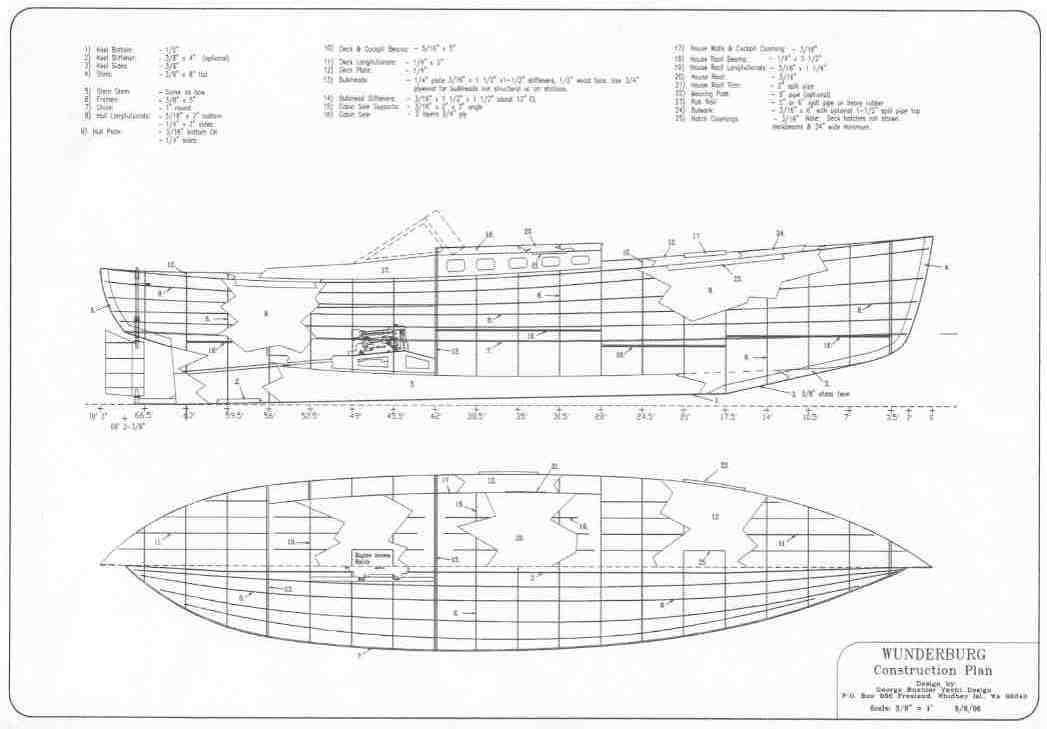