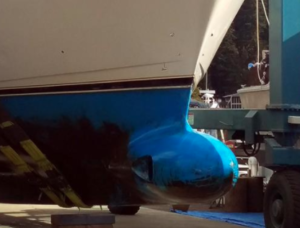 I get an awful lot of mail asking about putting bulbous bows on my designs. I personally have always thought they were strictly hype for small boats. The cost to build them is far more than simply adding a couple feet to the hull, something which DEFINITELY helps “performance.” But of course when bulb bows are so common in the ads we see, I suspect most people dismissed my opinions about them! Anyway, I recently got this letter from a guy who’s in a position to know what he’stalking about. I suspect he wouldn’t care to be quoted so won’t mention his name or the names he mentions. But I think you’ll find his comments quite interesting! For instance, I always thought the bulb was to reduce pitch. I was surprised to learn that had nothing to do with it.

“The “bulb” was designed by two naval architects for a major shipping line. Both are members of my yacht club. A long time ago they discussed the “bulb” with me, which is called the “bow wave depressor” in the shipping trade.

According to them the bulb is supposed to act like a little ship being forced through the water by the big ship it is attached to. Because it is forced over its displacement speed it has a very large bow and stern wave and a hollow between them. The placement of this hollow is critical as the bulb must be designed so the ship’s own bow wave falls into the hollow and is therefore depressed or made somewhat smaller. Supposedly this effects the wave making properties of the whole ship providing some fuel efficiencies.

The bulb was never met to have any thing to do with pitching.How a boat pitches is more related to bow rake and flare, “flim and flam”, than anything else. In areas like the west coast, where on shore wind predominate, designers tend to have lots of rake and flare to provide lift in an attempt to keep the boat dry. In areas like New England, with predominantly off shore winds, designs tend to have plum bows with little flare like the NewEngland lobster boats. The Great Lakes boats usually have plum bows with lots of freeboard (short choppy conditions) and the gulf shrimper bow were all designed to provide the pitch needed in unique conditions.

One production company put a lot of rake on one of their newer large yachts, almost a “clipper bow”. I hope it was designed with the idea of providing pitch to protect the boat in certain sea conditions and not just for looks. Than they added a bulb which was supposed to provide some fuel efficiencies. Tanks tests, where a beautiful laminar flow over the bulb allowed it to work correctly, showed promise. But in actual use on a small ship, where a more active movement through the seas results in little laminar flow over the bulb, the efficiencies were just not there. This is when the “pitch control” story surfaced to justify these things. Of course we all know if pitch is a concern than bow should have been designed correctly in the first place.Or if, for some reason additional pitch control was needed, a much cheaper and smaller flat plate would work a lot better than a bulb.

#1 of these new boats was supposed to be delivered by a local delivery shipper. He left Asia but returned saying the boat was being swept with green water. The great bow, which should have provided the necessary pitch to protect the boat, was defeated by the bulb. The biggest problem was leaks in a hatch on top of the pilothouse! I think we know why so much water was getting up there in the first place.

I personally think this whole bulb thing is more market than design driven. Maybe this ship like thing sticking out in front of their boats gives owner’s some face, but I don’t think it works.”

One final comment (this is me again). I think the proof that there’s nothing to it is that you never see them on racing sailboats, and those fellas pour huge amounts of money into their boats. One Swedish design had a bulb. It was discovered all it did was snag crab pots and hit the dock……

I recently got this letter below from Mauri Lindholm, a Naval Architect in Finland. His comments about the bulb hype are pretty interesting too! By the way, I appreciate getting letters like this. So many of the so called forums “out there” really are pretty silly. It’s good to hear some down to earth comments from guys who know what they’re talking about.

Just a few words on bulbous bows in yachts; The hull form with a bulbous bow is a must in today’s merchant and other such ships that spoil a remarkable share of the propulsion power for wave resistance (the other main resistance component being friction resistance). That’s the part of energy from propulsion (or from sails in yachts) spent for the unnecessary wave system behind your craft. The purpose of the bulb, as correctly explained by your friends, is only to reduce the bow wave system by creating a counter-wave that interferes and dampens otherwise larger bow wave. The earliest bow shapes resembling bulbous bows date back to end of 18th century warships. The bulbous bow is expensive to build due to fine lined but robust (steel) structure. It is not applied in ships that do not favor either the existence of the ‘extension’ (like ice-going fleet where other shapes of bow are must for ice-going capabilities or the bulb desperate for ice-strengthening) or are left without for simplicity or are not suffering from remarkable wave resistance. Sailing boats spoil the moving energy more on frictional losses rather than a wave system and therefore bulbous bows are rare or unjustified. The bulb also adds the “wetted surface” of the underwater hull and further increase frictional losses – not favorable for a yacht! Course-keeping of the hull may also become unwontedly high which doesn’t improve one’s yacht either (in respect of repeated fast turnings).
Regards, ML, Naval Architect, Finland.