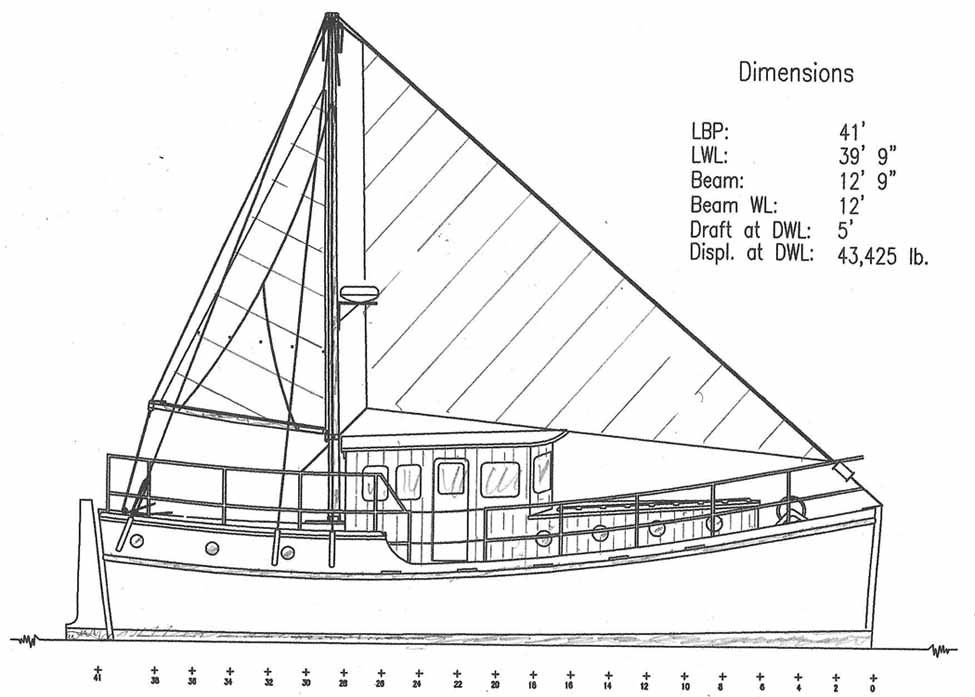 This 2017 “update” to the wood 41 DUCK incorporates a few small changes that seemed a good idea to me. Don’t get me wrong! I like the original fine. But I like this idea too. I think 41 is a good length so might eventually do several others this general size. Maybe! It’s a feasible and affordable (if you don’t get carried away…) home building project, as well as big enough to be a comfortable cruising home for a couple.

I gave it the “Modified Dhow” rig. I’ve played with various versions of this and finally have worked out what I like. It features moderate sized headsail on a heavy roller furler, and a small “main” which is flat cut and almost always up as a riding and steadying sail. Many people cruising DUCKS seem to have semi permanent awnings over the back deck to there’s no point in pretending to have a serious sailing rig on them. Note it has running backstays to support the mast. Since you’ll never do short tacks up a channel, the runners are no hassle at all and really support the mast. 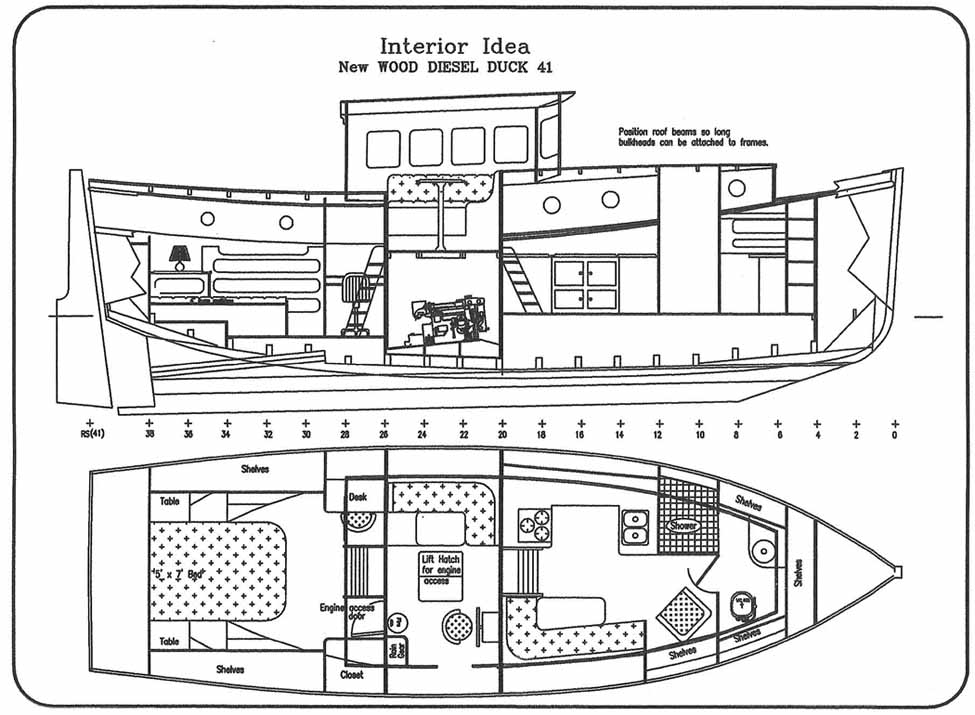 Placing the house right in the middle puts the engine and 650 gallon fuel tanks in the middle which helps maintain trim regardless of fuel level. This isn’t much of an issue but it’s a good thing regardless! This layout also makes the stern cabin more livable, although that 24″ further forward comes at the expense of the forward cabin. But since this boat was meant to be a home for a couple, something I fantasize about owning myself, I like the extra space in the stern cabin. It has a good desk and, well, “elbow room,” making it a decent lounge area too. I’d put solar panels on the wheelhouse roof but that’s probably the only concession to the 20th (ignoring the 21st) century I’d do. No generator other than a 2Kw Honda in a deck box. And yes, kerosene cabin lamps although maybe a couple discrete 12 volt ones. Oh, and hand pump water and a gravity shower! But go ahead and “pimp” him out if you want. A boat like this can be just as shippy and traditional as a Tahiti Ketch. If you don’t know what that is do a web search…. 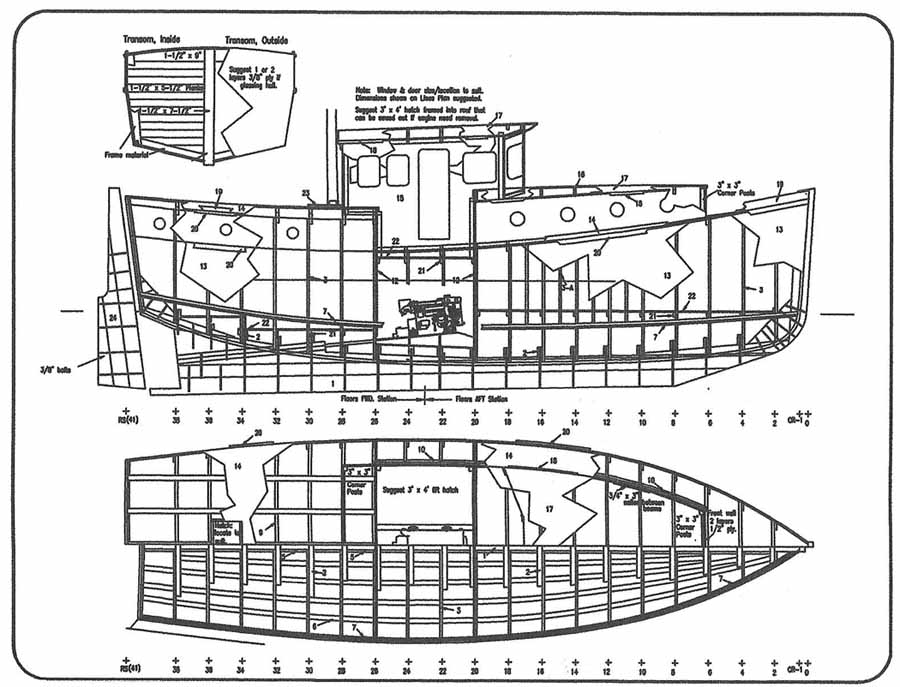 The construction plan is well documented on this site with several photo essays of various wood DUCKS under construction. He can be conventional planking, “composite,” or straight plywood, all “clearly and laboriously” described in my book Backyard Boatbuilding. If I do say so myself! 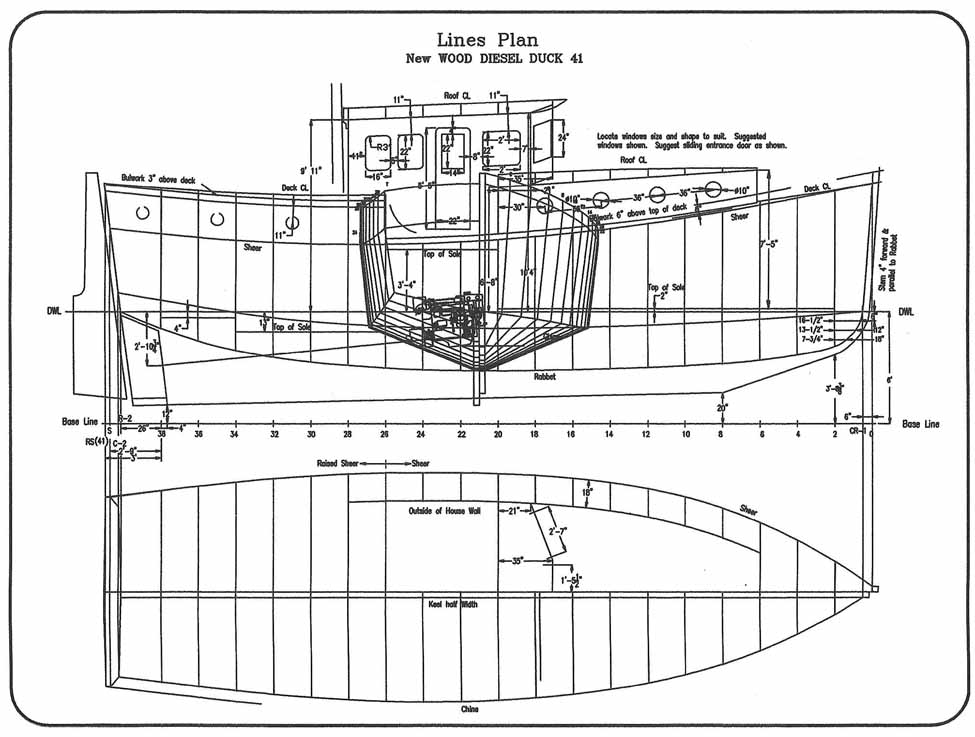 The Lines plan shows the simplicity of the DIESEL DUCK idea. There is nothing new or exciting about the lines. Quite the contrary, they show what used to be considered normal, which was moderation in beam and freeboard. Yacht design has got away from that, instead tending to emphasize interior volume. It’s all a trade-off and none is better than the other. Just be aware of what each does.

I’m frequently asked how is it the DUCKS are so fuel efficient. For example, the 462s (about 50′ now overall) are the ones I hear the most about and the average fuel burn is 1.25 to 1.5 gal/hr. How can this be? Simple! First, moderate windage, moderate beam, but very important, the transom clears the water before the chine is submerged. You can test that yourself with a skiff. But a “body” in the stern seat and row. The skiff doesn’t move easily. Move the “body” to the front, lifting the stern out of the water. The skiff rows easily and coasts! 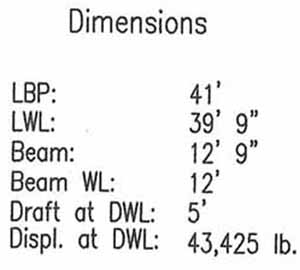