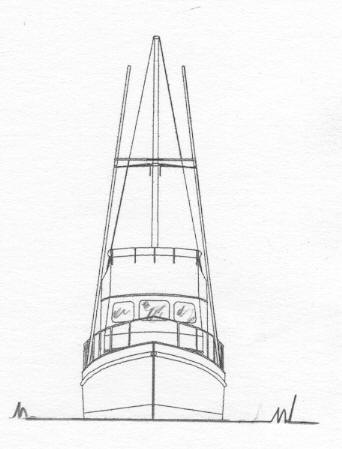 A guy liked the 47-Plus but wanted more room. I borrowed a lot from the 462 Sedan that Bill Kimley worked up at Seahorse, changing a few things to what I like better! I also made two versions; one with side decks down both sides of the aft house, and one with the aft house that goes full width of the hull. 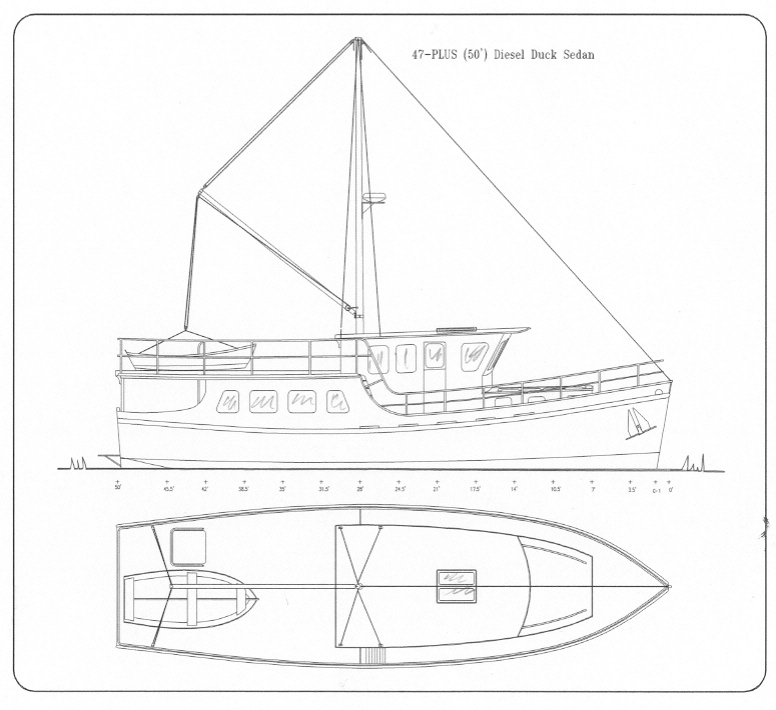 This shows a permanent hard top over the cockpit. Access to the roof is via a ladder in the cockpit on the port side, and a ladder down to the deck on the stb. side. I think if you’re going to have access down the front it needs to be on the same side as the door to the wheelhouse! Personally, I wouldn’t have the access down the front as it looks potentially dangerous to me. 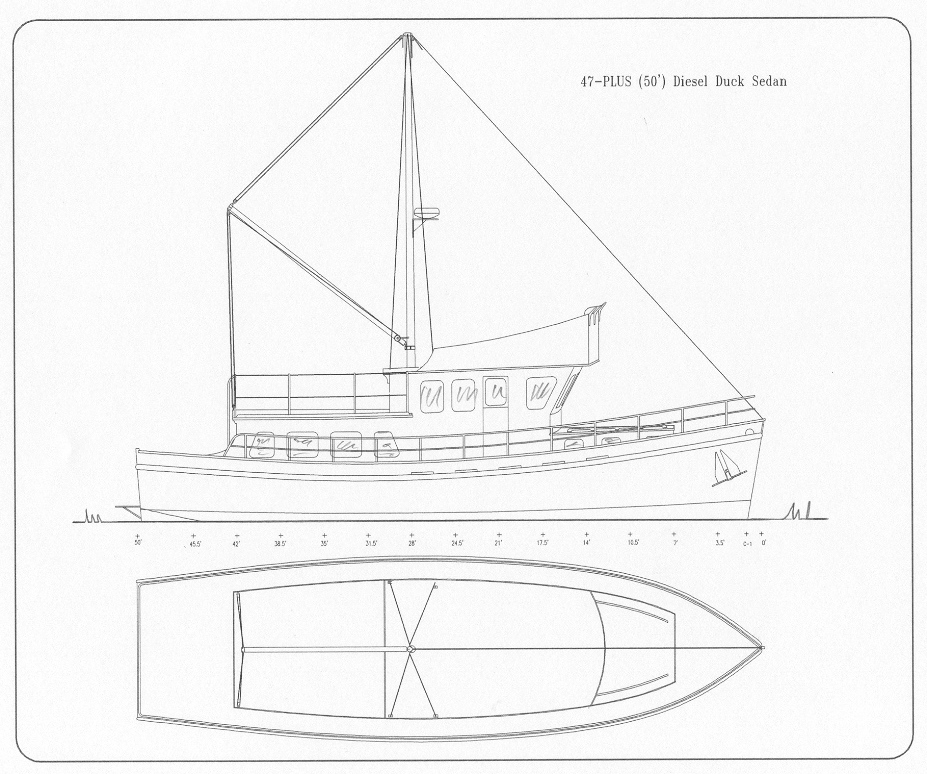 This idea seems more “shippy” to me. Access to the roof is via a ladder in the cockpit.

Both versions have the same interior, with very little less space in the side decks version because the frames and insulation take room, and the house walls on the full width version need to be heavier with vertical framing. 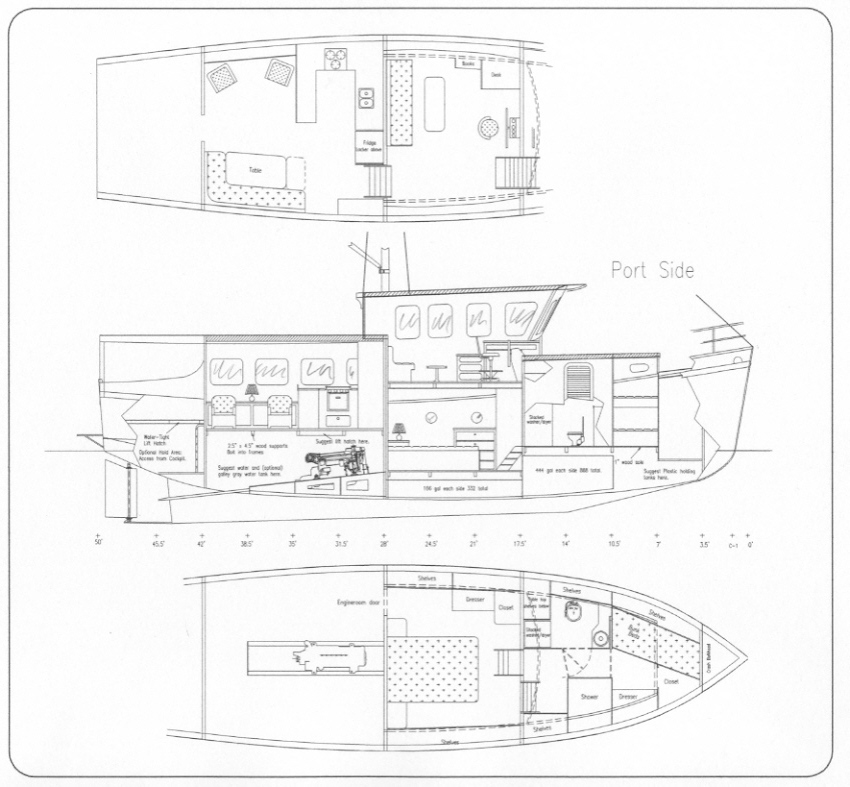 And here’s the side decks house version, and bathroom in the bow. 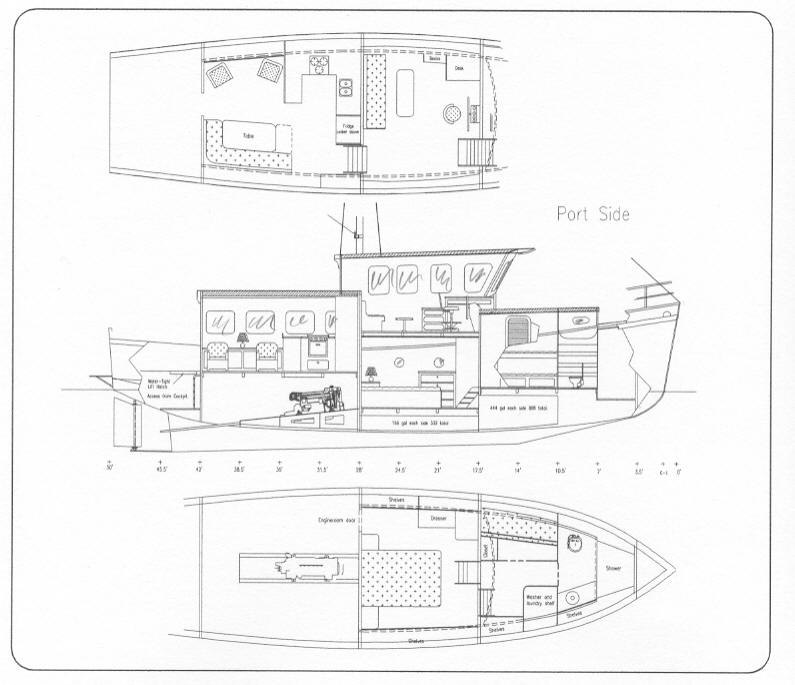 While I think this interior is an amazing use of the space, feel free to change it to what YOU want. For instance, perhaps the galley should be against the back of the house with the “living room” part forward so it is sorta connected with the pilothouse? As I repeatedly say, setting up an interior to exactly what YOU want is one of the main reasons to go with a custom boat.

It seems this kind of boat would be used by families more than”gung ho” cruisers, so I gave it guest or kid’s bunks. You’ll see one version shows them in the bow, and the other shows them forward of the owner’s cabin, leaving the bow open for a large bathroom. It’s big enough to be called that rather than “head.” But then so is the other, except the shower is across the hall. 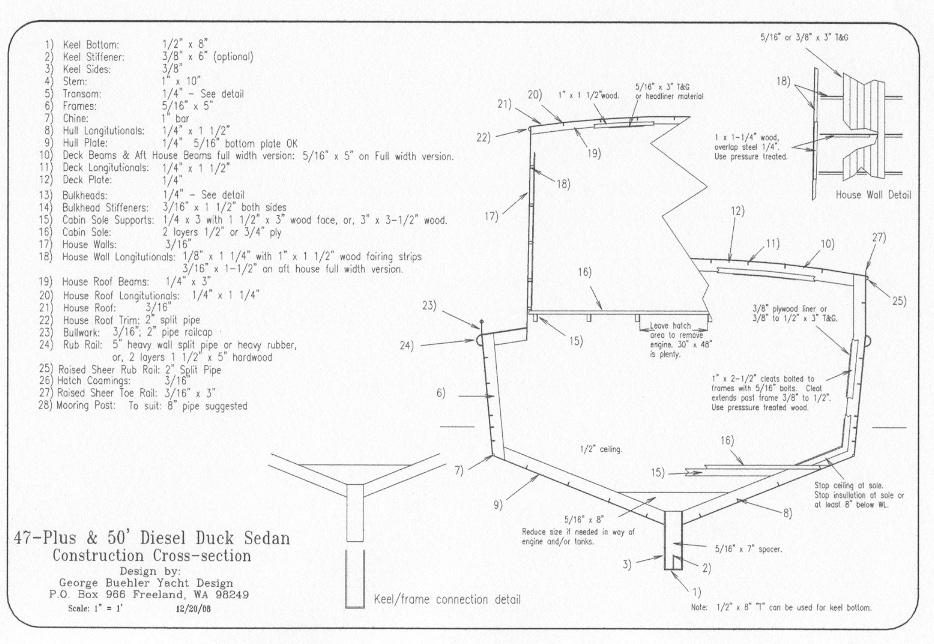 She and the 47-Plus share the same construction. Above are details and below is a “cutaway” showing how she goes together. 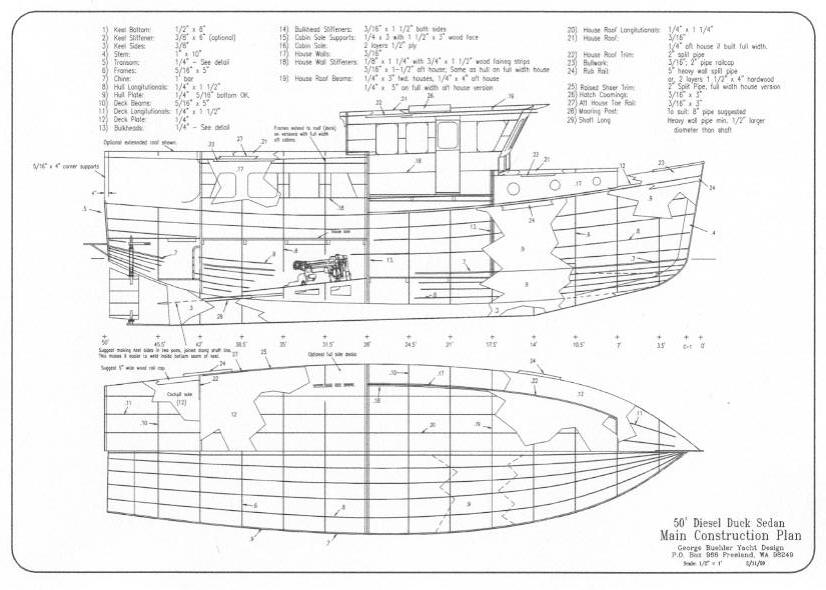 While this sort of boat is very seaworthy, personally I think she is to high and has to much glass to be what I’d want if I was doing much real passage making. But if you watch the seasons(like I would in anything, being no hero) she’ll do fine, and she would be perfectly safe for off shore “coasting”of course.

The first one of these is being built at Asboat, in Turkey, and the photos are her. The owner wanted a higher aft house than I was comfortable with, giving more space over the engine. To me, that just means you’ll need a step ladder to get down to it. He had some interior ideas too that I couldn’t put my name on. But, over time we both loosened up some and I like the current interior fine. I just don’t like the tall aft house he went with. As she’ll be a live-aboard cruiser based around the Med, I’m sure she’ll be wonderful for that use. She’s is just what her owner wants, and that’s the bottom line. I wish I wasn’t so goddam rigid…..

I want to draw a version with a vertical front wall to the wheel house, and, I’m wondering about a version with the engine room under the wheelhouse, a passageway beside it, and a lower profile in general. Perhaps just building her as the47-Plus is the thing if that’s what you want? Maybe not though as I rather like the big aft cabin.