The “Troller” (not Trawler) Yacht Concept

This is condensed down from a couple chapters in my book The Troller Yacht Book, Norton Publishing, available mailorder from me or from better bookstores anywhere. I suggest if what you read here makes sense to you then read the book! It goes into far more detail…..

We’ve all read books and magazine articles about people who’ve cruised the world in small sailboats but many folks never realized that while those few were out sailing countless small powerboats were out there, too, their owners for the most part also earning a living, but not by writing for yachting magazines.

Western America and Canada have some of the most and treacherous coastline in the world, with few protected anchorages–a trip to be attempted only by seaworthy boats and mariners who are prepared.Sailing yachtsmen who negotiate this coast make a big deal of it, and rightly so. But God only knows how many 30- to -50-foot fishboats have gone up and down that coast routinely. And that’s nothing unusual; little fish boats are running over the oceans everywhere. For instance, some regularly chug back and forth across the North Atlantic from Iceland to England smuggling in fish, and buying booze and electronics to smuggle in home.

It’s funny how many of us never notice that. I was raised in Oregon and grew up with this stuff but it took me three sailboats and almost 30 years of boat building, owning, dreaming, buying, reading, designing and ETC. to see what was in front of my face; that small ocean going powerboats were the basis for a damned good cruising boat. And not only that, I came to understand that they made sense cost wise both for initial expense, and long term operations.

While most people who think about “goin’ cruisin”only consider sailboats, the record is clear: Day in and day out, quietly and without attention, small seagoing powerboats prove time and again that they are proper vessels for venturing out to sea, keeping their crews safe and considerably more comfortable than they would be in a sailboat.
If you read today’s boating press, ocean cruising in a powerboat these days means ocean cruising in a trawler yacht. The better ones are safe, seaworthy, and solid ocean-going cruisers, no question about it. But not all! I’ve seen some being advertised that would need to be towed by a tugboat to go against a chop, with mechanical and electrical systems that even the US Navy couldn’t keep operational!

My objection to their being held up as examples of the ideal ocean-going power cruiser is not that they aren’t able, for many certainly are. But they’re tanks! Their wide, deep hulls may have plenty of room, but they also need plenty of power to push them through the water. And those high, shippy-looking topsides and commodious houses have a great deal of windage.

When it comes to drag, windage is actually worse than wetted surface.A huge hull may take a while to reach hull speed if it doesn’t have much power, but it will eventually get rolling along, in calm conditions of course.
With an ocean-cruising boat, we care less about speed than about mileage, or range. A trim hull with reduced windage moves easily through the water and the air, and so it needs less horsepower than a tank of similar length but 50% or more displacement, and less horsepower means less fuel used.

The theoretical model for the trawler yacht is a heavy-duty commercial fishing boat, sort of a seagoing bulldozer. Its voluminous hull is beamy and high, with plenty of displacement to support the weight of the giant winches and booms that hoist the huge, fish-filled net free of the water and over the side. There’s nothing subtle about the way a trawler fishes. Its mammoth engine drags a heavy net across the ocean floor, scooping up everything in its path and scraping the bottom clean. I’m surprised they haven’t been outlawed. For instance, aside from destroying the bottom habitat, the “by catch,” which is what the fish that aren’t in season or otherwise aren’t wanted but are caught in the nets are called, in Alaska in any given year is400 to 500 MILLION tons. They shovel it over the side.

While the working trawler may be a rugged and seaworthy boat, it’s a poor choice as a model for a cruising boat. A trawler is designed to haul weight, to be a semi-stable working platform, to fight the sea, not flow with it. Its fat hull is designed to hold tons of fish, not the comparatively light weight of a cruising couple’s worldly goods, and it needs lots of power to push it through the water. And lots of power means lots of fuel.

Getting inspiration from fishing boats is nothing new in the cruising world. Earlier in this century, sailboat designers also went to commercial fishing boats for inspiration, and designers like WilliamAtkin and L. Francis Herreshoff fine-tuned working watercraft into perfect examples of safe and able ocean-going yachts. Atkin’s wonderful INGRID is a perfect example of a Scandinavian fishing boat design, fine tuned down to the needs of a cruising couple.It was designed to carry a couple of people and their personal effects, not a hold full of fish and ice. Unlike most contemporary sailing designs, it has sufficient area underwater to track well and heave-to easily. It has a fully protected rudder and propeller, and a long keel that allows it to be beached or easily hauled out on small railways. Unlike some “traditional” sailboats, the INGRID actually sails well enough on all tacks to be cruised without an engine. For the less gung-ho, 10 horsepower will get them around in calm conditions, and 30 horsepower would do in almost any situation.

That tack into sail was necessary to make a point: While the INGRID and some other sailing yachts are highly evolved, perhaps even perfect off-shore cruising boats, there are far fewer cruising powerboats with that degree of refinement. Most are pretty much just standard trawler hulls fitted out as live-aboards rather than fishboats. They’re safe, roomy for their length, and have comfortable interiors. But they definitely aren’t efficient long-range cruisers.
The problem, as I see it, is that powerboat designers went to the wrong fish boat for inspiration. Long-range cruisers don’t need a trawler yacht; they need a TROLLER yacht.

The West Coast salmon trollers evolved to meet criteria very similar to what we want for a long-range ocean-going powerboat. Salmon trollers don’t go out like farm machinery and plow the same grounds every day. They catch their fish, no surprise, by trollingtowing hooks and lines–and individual boats usually don’t catch that many fish at a time. They don’t need to. Because the fish aren’t marked or torn up by nets, troll-caught salmon are the most valuable fish on the West Coast, ending up in the best restaurants and fish markets, while netted salmon end up in cans or fillets. Since they were designed to carry a small quantity of high-value salmon instead of a huge slug of low-cost fish, trollers don’t need to be as fat and burdensome as trawlers. Instead, trollers are designed to move through the water easily and cover a lot of water, while using as little fuel as possible.

Trollers frequently run for hours, sometimes even days, looking for fish. Many start the season in central California and by the end of the season range the entire coast, clear up to Oregon andWashington. And because the coast offers few harbors, they often stay out in bad weather.

In their glory days, trollers ranged in length from the low 30s, for boats that usually hung around one area, to the high 40s, for boats that wandered the coast or went way offshore looking for tuna. You hardly ever see one much over 50 feet, because they were usually operated by one person alone, or sometimes by a crew of two. Pretty much like an ocean-going cruising boat, if you think about it.

Salmon trollers hit their peak in terms of design efficiency by the 1940s. Then engine designs started changing, and power plants became available that were more powerful, lower maintenance, and most significantly lighter weight for their power output; this resulted in hull designs changing to take advantage of the new power. But at their zenith, before their fine-lined hulls began to pork-up to handle larger engines or to be able to “cross-dress”into other fisheries besides trolling, the Pacific trollers were as close to perfection in terms of seaworthiness and efficiency under power as anything since the Eskimo kayak. Their basic concept needs very little tweaking to become the roots for a highly efficient, ocean-going power cruiser.

Think of a Troller Yacht as a Performance Cruiser, not a beast of burden like a trawler yacht. Compared with them, our performance cruiser is far more affordable to build, maintain, and operate; it’s easily handled by a short-handed crew and perfectly comfortable for extended stays aboard. A Troller Yacht, unlike a trawler yacht, is well within the financial range of most folks  with middle-class incomes to own AND operate! 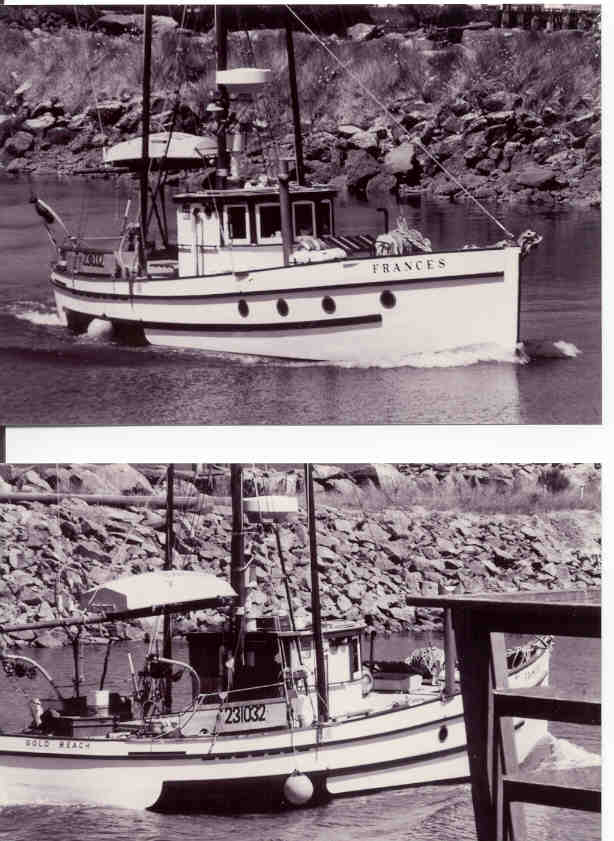 Here’s a couple photos (taken in 1998) of the Oregon based troller FRANCIS. I’m going to own a boat like her one day. I’ll keep her perfectly restored and maybe even fish it the few days of the year allowed… . Their day is over, thanks to MBA “fish managers” who regulate in favor of corporate owned craft with no regard for the social and economic values that small family owned fishing vessels represented to our coastal communities as well as our country…. But I’ll spare you; read The Troller Yacht Book if you want to hear more about that…..