The first DUCKS built in steel all floated below their waterlines when fully fueled and loaded. I never considered that an issue because it’s typical of all cruising boats; the DWL (Drawn Water Line) means just that; loaded for use is always something else. After all, a couple 44s were built that carried 1300 gallons (1079 lbs.) of fuel. Add water and provisions, and you got quite a load. On top of that, some builders have added extra superstructure or machinery, and that adds weight.

It isn’t an issue with wood or aluminum hulls. They weigh considerably less for their strength (did you know plywood is far stronger than steel for its weight?) and DUCKS launched in these materials float 8″ to 10″ ABOVE their waterlines until they’re ballasted.

I’m not being defensive here! It’s just that I never cared exactly where a waterline ended up because it’s no more than a rough guide for any cruising boat since their loads vary depending on use, and as a result, no cruising boat ever floats consistently at one WL. The only time a WL is important is when you have a class race boat where all the boats have to be exactly the same.

But there is one other important place, and That’s when draft is an issue. If you’re planning on using a boat where the maximum depth is 6′, you don’t want a boat that draws 6’6″.

So, I think we’ve fixed that. There are now new versions expressly for steel that are a bit beamier at the WL aft as well as have a bit deeper of rabbet aft. This adds very little material (weight)but does add to the volume, so now the boats will support more weight before they get to the WL, and take considerably more weight to sink much below. The Body plan on the left is the original, and on the right is the new. Note less flair and dead rise to the sections aft. I also gave the new version frame stations spaced at an even 3′ rather than the extra frames of the original.

Here’s how this has effected the 48. I figured the original has about 36,000 of steel in her; the “Evolution” version just slightly more. Fuel, systems, interior, provision, etc. are all extra weight. You’ll see that both versions take considerable weight to sink several inches, and lots more to sink another couple inches….

And so on. The other versions have similar reserve buoyancy although a bit higher percentage of extra volume.
Along with this extra volume, it seemed many people like a bit of rake to the bow so I added that. And, Bill Kimley’s transom stairway that he puts on all the Seahorse built versions really appealed to me, so I “squared up” the transom some allowing the stairs to be installed if you want, and, I gave the new versions inboard rudders. Most people seem to like that, and it makes it easier to hook up steering although Seahorse did a clever modification to the outside steering. Leaving the rudder where it was originally drawn, they stopped it at the WL and continued just a rudder shaft to the deck. It’s outside the transom and easy to service. This version I’ve drawn has a traditional inboard rudder. It’s pretty simple too and is fully protected from damage. The last 3′ of the hull is devoted to the steering system, the stairs to the swim step, and a storage area. I’d carry one of those new silent Honda 2kW generators there and forgo a built in gen plant..

Here’s what the new 48 DUCK Lines plan looks like. By the way, I also raised the house 7″ as I decided it would make it easier to see over the bow. And, since we now have access to the stern cabin from BELOW the pilot house, I puta door on the back of the wheelhouse and only one side door; stb. side. The port side has a raised sole (floor) with a couch on it, allowing 6′ 6″ headroom in the passageway below. 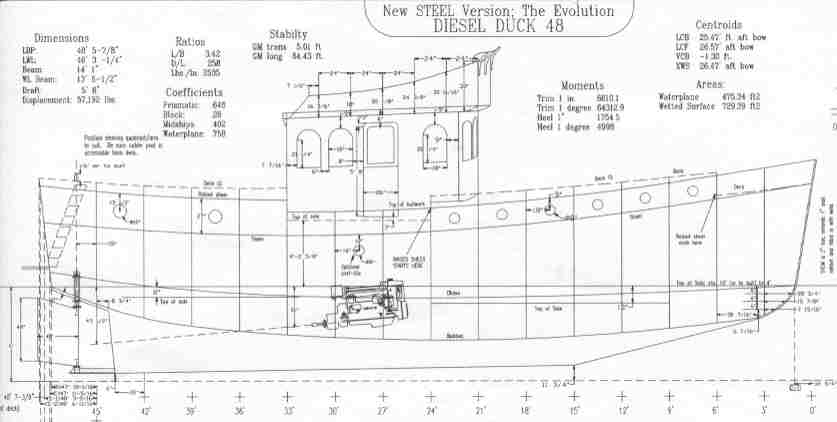 Now, here’s the original Lines profile. As you can see, the “Evolution” version is still clearly a DUCK!

These are very minor changes and won’t have much effect on fuel or her easy hull motion. If I was building in steel I’d use the new hull. If I was building in wood I probably wouldn’t because lighter is always better (when the structure is still beefy!)although I admit, I like the look of the Evolution Ducks…. But I also love the plumb bow and outboard rudder of the original. YOU decide!