What’s considered a ‘complete’ set of plans seems to depend on the designer. Obviously, a basic set of plans needs to contain enough info to build the boat! Now, the degree of detail might depend somewhat on whether or not the building is to be done by a amateur or a seasoned pro or for a production run in a factory. I’ve found most professional yards take the offset table and other dimensions but just build it how they please, while a home builder will require very complete construction drawings but will have an easier time installing specific parts like cleats, cockpit lockers, vents, and systems like showers, lighting, galley arraignment and so on, in the manner that seems practical to him. You see, the exact place something goes where rarely makes any difference. Specifying out and laying out everything can jack the plans price up, and if it’s done correctly, which means the designer using 3-D views to be sure things work out, the plans cost will go through the roof. In real life, exactly where each wire and thru-hull and pipe goes doesn’t matter. An amateur can figure it out and a pro will do it as he always has. And frankly, if the designer doesn’t have a solid construction background you, the builder, will be better off figuring out where to put these sorts of things, based on what’s sensible!

Some designers advertise ‘full size patterns!’ as though this is something special. It isn’t.The only full size patterns I’ve seen that would really make a difference are when a hull construction plan is figured out forCAM (Computer Aided Manufacturing). In this case, every piece of the boat is drawn on screen by some poor CAD operator. This can cost $4,000 to$10,000 (depending on details) to have done for a mid 40’s foot boat. Then, you need to pay somebody with an NC machine to cut out the plate. And then ship the parts to the building site. According to an experienced professional builder I know, it isn’t anywhere near cost effective to have this done unless you’re doing a production run of three or more boats. OR if you’re doing a complicated design that requires a great deal of plate bending.

When you see ‘full sized patterns’ advertised generally what the guy means is he has the frame patterns.So what? There’s a lot more to the boat that requires patterns, or at least being ‘laid out’. You need the stem profile, the keel, the transom. You’ll need the house sides and the rudder. And with a metal hull that “patterns” would include the plate patterns. I doubt very much the people advertising the ‘full sized patterns’ are giving you all this stuff, and if they aren’t, then you’re going to have to loft the boat anyway. Lofting is about the easiest part of the entire building process but for some reason scares alot of folks. There’s nothing to it! All the dimensions are given to you. All you need to do it is measure the distances, make a mark, then connect all the marks with a line. One of the most in depth descriptions of how to loft is in Howard Chapelle’s great book, the ‘bible’ of wooden boat building, called ‘BOATBUILDING,’published by NORTON. Probably the easiest to follow description of how to loft is in, if you’ll forgive me, BUEHLERS BACKYARD BOATBUILDING, published by International Marine.However, if you want full sized patterns I can make them, but I’ll charge considerably extra because somebody will need to stand in front of the plotting machine all day. They’ll be printed on vellum, since unlike paper, it stays stable regardless of humidity.

Some people offer steel kits of their designs. These are every steel part cut out and labeled, and all you have to do is weld them together. This of course requires a cutting disk to be made, as well as CAD time for somebody to figure out all the little stuff. The costs are much higher doing it that way; I’ve seen one 50 foot kit for about $65,000 that probably had less than $15,000 worth of steel. I don’t think the labor saved approaches the $40,000 difference unless, as I said before, it is a very complicated shape and you don’t have access to serious metal forming tools.

My plans don’t normally spec out the wiring or piping or brand names of things like stoves, steering, pumps, etc. because exactly what you use and where you put it doesn’t matter, as long as it’s ‘adequate’. Generally I don’t care what brand of what you put where. Some designers use words like ‘appropriate’ or; ‘to be done to standards as laid out by the ABYC (American Bureau of Yachting).’ A funny one I saw recently was; ‘to be built, installed, and rated to suit the purpose intended’. And as I’ve said, some spec out everything.In general, the more stuff speced (?) out the more the design will cost. Frequently you’ll see things speced out that aren’t right and experienced builders will change them. I’ve seen entire construction plans changed by professional builders. As one told the boat owner, his yard had been in business several generations now and he really suggested the specs be changed just a bit here and there….

While you surely realize I’m not impartial, I do believe my plans are well detailed and very complete. Here’s what the average set of plans consists of. I’m posting these drawings over several pages to help keep the site loading rapidly for folks like me, living with rural slow servers!

1) Profile: This shows you what the thing is supposed to look like. This is the 71′ ELLEMAID (A Swede name for their mystical, but maybe still real, Wild Women). I love this design. More of her is shown in the stock plans section of my site; georgebuehler.com 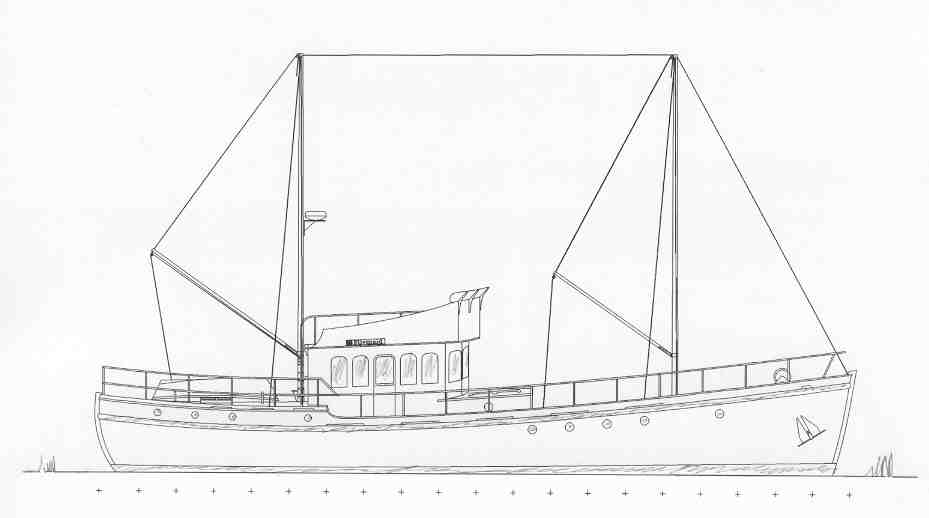 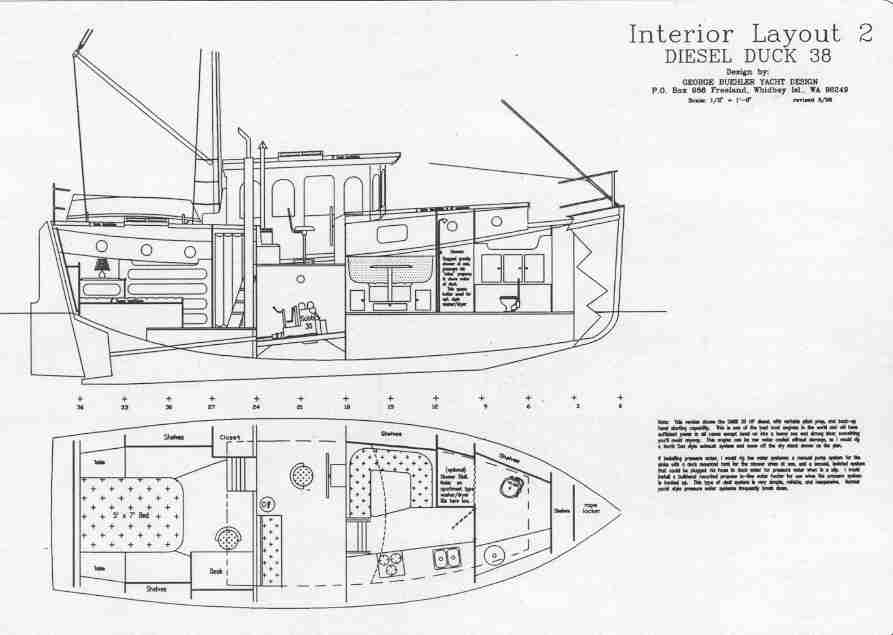 2) INTERIOR: This shows how I (or whoever commissioned the design) think it would be fun to have her. It’s strictly a guide and everybody changes it to suit their own interests. There’s no reason you should be any different although if you’ll forgive me, I think MY interior layouts are good. I’ll admit I’ve seen improvements made to them though. I don’t dimension things out.Anybody with the nerve to build a boat can learn to read a scale ruler and thanks to CAD, the drawings are very accurate. Besides, you’re gonna change things anyhow….

3) The LINES PLAN & OFF-SETS: The ‘hull lines’ are all the dimensions of the basic boat. Along with the Table of Offsets and usually another sheet or two with some dimensional stuff, the Lines Plan gives you all the dimensions needed to build the boat. The frame or station dimensions, the  house and windows, the engine shaft angle; everything. I usually add an extra dimension sheet or two. For instance, if the boat has a specific deck camber, the deck beams are laid out for the builder too. Normally there will just be a single beam shown on the main Lines Plan, and all beams will be made to that camber. 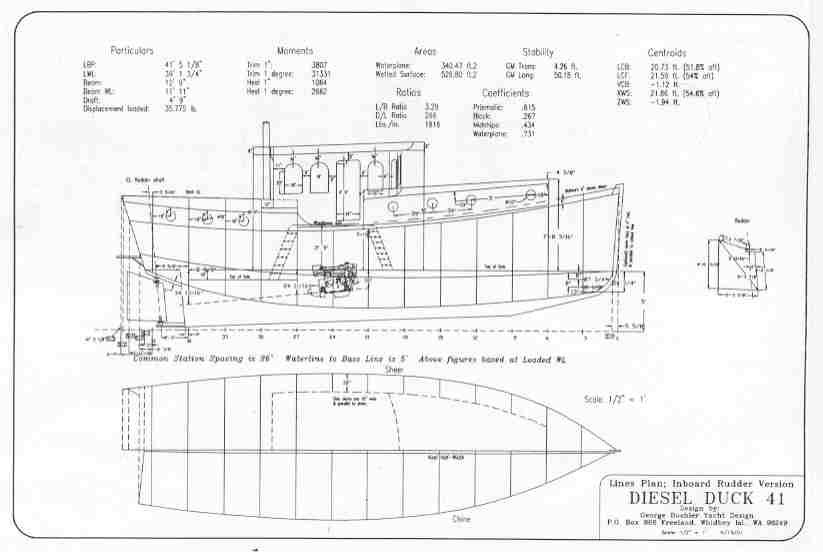 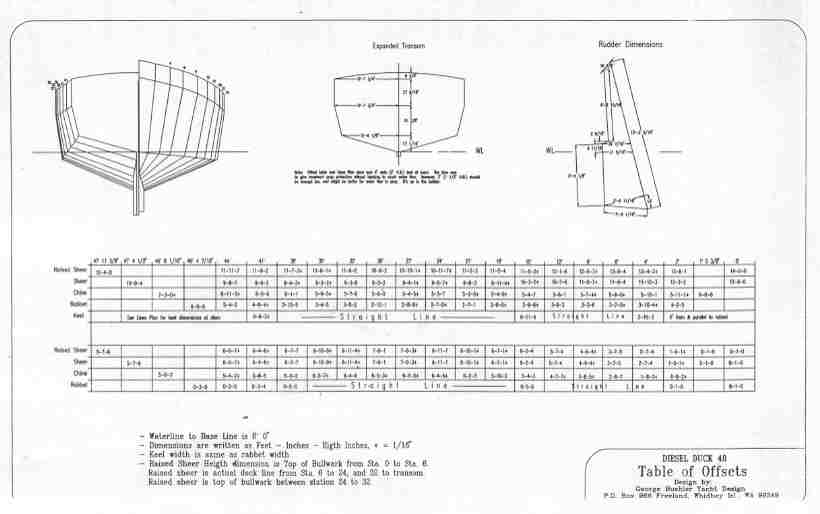 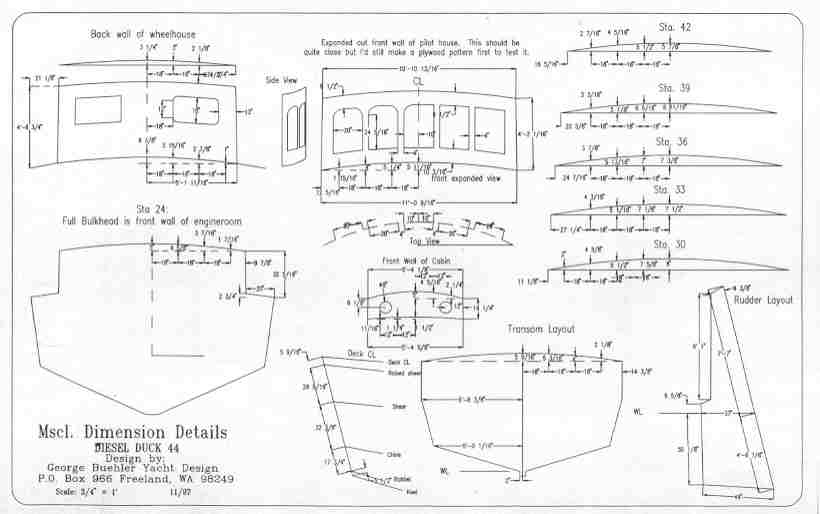 4) CONSTRUCTION PLAN: This sheet will show you a view of the boat without its hull skin on, giving you an idea how all the pieces go together. By the way, my wood plans are this detailed too. In fact, I even figure out the frames bevels; there’s really no need to loft! 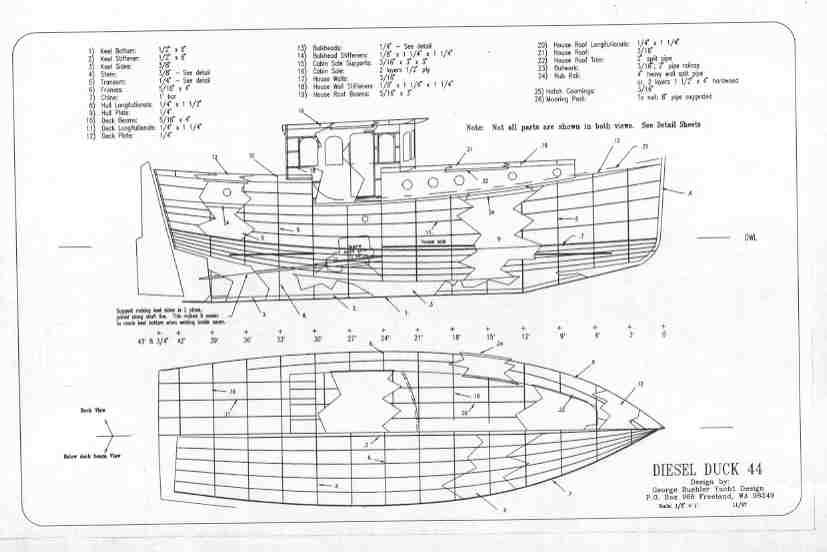 5) CONSTRUCTION DETAIL PLAN(S): You’ll get at least one sheet (depending on the size or type of boat) showing a basic construction cross-section, with a close “guestimation” of the amount of steel required. There are also several sheets showing specific details; tanks, engine mounts, house, bulkheads, and so on. Here’s a few examples…. 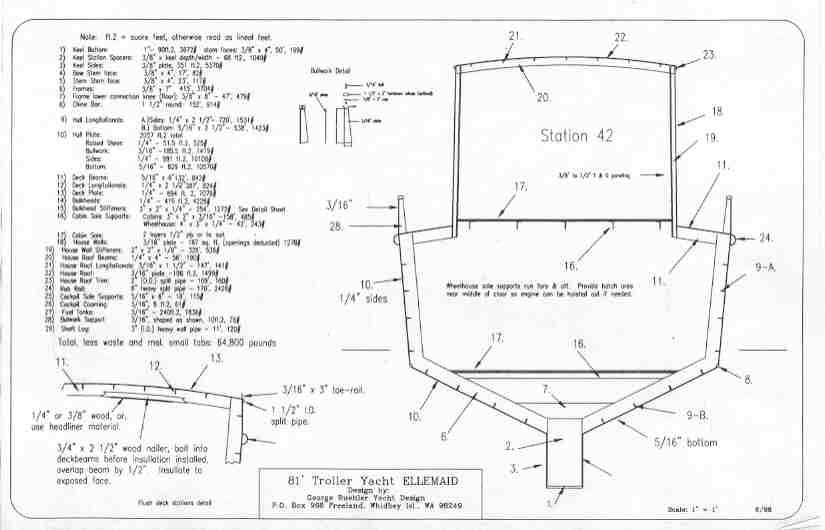 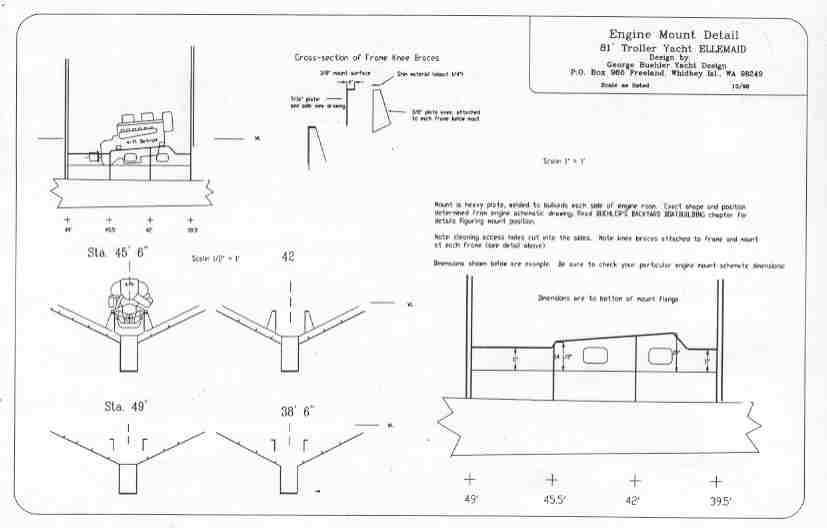 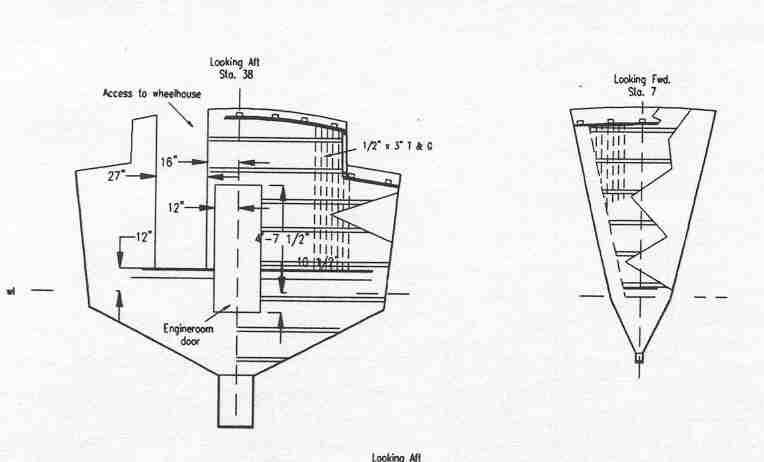 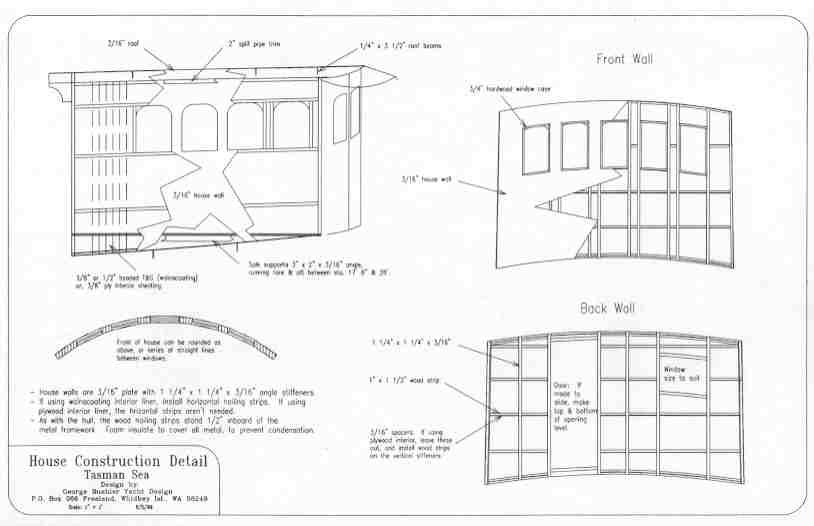 6) SAIL PLAN: Practically all of my cruising power designs have backup sailplans for the reasons you can read about elsewhere in this site. This sheet is for the sailmaker, shows the boat with the sails up, and gives their dimensions. 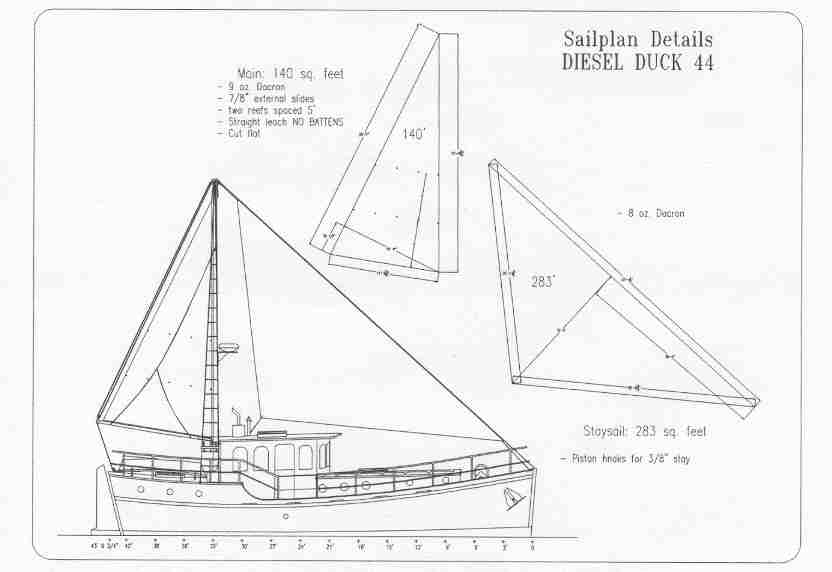 7) SPAR & RIGGING PLAN: The spar and rigging dimensions are here as well as rigging parts details. There’s a lengthy chapter in my book; BUEHLER’S BACKYARD BOATBUILDING, that tells you in great detail how to make all this stuff yourself. The rigging plan is quite simple. It can cost you $14000 to $20,000 from a yacht rigger for a moderate sized boat, or, you can build it yourself from the directions with the plans for under $1,000. Believe it or not, I prefer the less expensive system because it’s stronger, and better looking (from a traditional point of view). The spar is made from an evergreen tree; here in the NW that’s free. The standing rigging is 3/8″ galvanized. Galvanized wire isn’t common in the yacht world because it isn’t chrome looking, but, it has many practical advantages. I’ll spare you, but if you’re interested, read the lengthy rigging chapter in my Buehler’s Backyard Boatbuilding. You might be surprised to learn the positive side of gal. wire aside from the cost savings. Here’s the rigging and spar plan for the 44 DUCK. “Simple is as Simple does” I’ve heard it sneeringly said. But with a seagoin’ boat, simple can also mean reliable, low maintenance, and most important, able to be fixed shipboard. I know a few engineering types who I hope one day get as frightened as I’ve been on the ocean. It tends to influence your perspectives……! 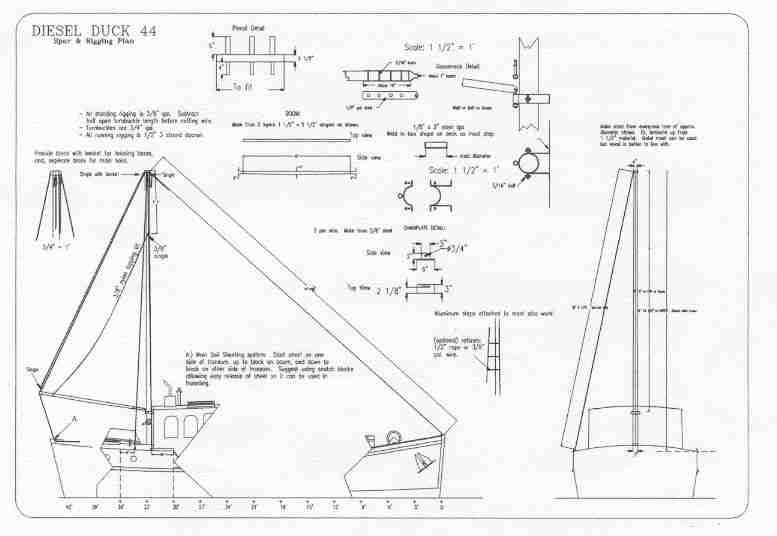 By the way, the plans price is for ONE boat! If you build more than one or if a friend wants to build one, you need to pay me the plans price for each boat built. This is enforced by JoMamma, a Voodoo lady you really don’t want to cross….