Much of the credit for the original Diesel Duck, the 38′ Patti Ann, goes to Pat Blackshaw. Pat and her husband Joe were long-time liveaboards but were fed up with sailboats in general and the handling, structural, and mechanical problems of their 45-foot fiberglass sailboat in particular. They had reached retirement age, and the siren call of traveling in straight lines in a snug, heated wheelhouse proved irresistible. To the shock of their sailing friends, they decided to go for a power cruiser. Not finding any production boats that really fit their needs and not willing to buy an older custom boat and risk inheriting a whole new set of problems, they decided a new custom boat was their best answer and luckily for me, back in 1994 or so, hired me to design it. 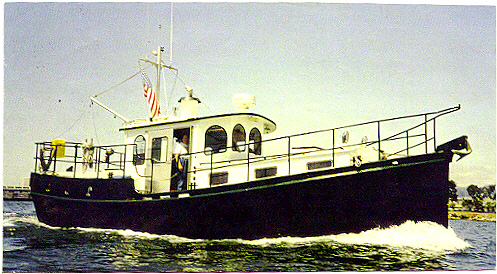 Here’s what the original looks like. Pat says in calm conditions she’d idle along at 8 knots burning about a gallon an hour.

I’ve always loved the NW salmon trollers and felt that they, rather than those “bull dozers of the sea,”trawlers, made the most sense to use as a base for a cruising powerboat. Trollers needed to do everything our cruiser does; be seaworthy and fuel efficient. They didn’t need to carry huge amounts of fish; they never caught much fish! That’s why they had such efficient hulls; they’d often have to cover a lot of ground looking for fish. They meet the same criteria as a cruising boat; safe, comfortable for a couple people, and able to cruise long distances. So, I made preliminary drawings based on sort of an overweight troller; she had to be because Pat insisted on staying under 40′ yet we needed a liveaboard interior. Pat and I fought tooth and nail during the preliminary design sketches, but she held me to her requirement of staying under 40 feet. I like to stretch out hulls rather than try to squeeze a livable interior into a small space, but by the late 1980s, big-city marina rates in California were running $11 to $14 per foot a month, and Pat refused to let me talk her into a longer boat. And she was right. By keeping the emphasis solely on the comforts of the owners (and not guests),and by making the hull rather “big” for its length (although not by trawler-yacht standards), we were able to fit in a functional liveaboard interior.

By the way, this is how custom design is supposed to work; a client’s strong ideas and very specific needs blended with the designer’s sometimes perhaps “rigid”opinions. I drew and Pat rejected all sorts of versions before we arrived at the final result you see here. The boat worked out great, and much of the credit is due to Pat’s tenacity, vision, and plain mule stubborness….

Pat’s boat was built of steel by Don and Jeff Millereck at Coast Marine Construction, in Cotati, California. Unfortunately, soon after construction started Joe died, but Pat had the boat finished and lived aboard for several years in Oakland, California, cruising locally and once down the coast to San Diego. After several years of living aboard and looking for crew that could take off whenever Pat felt like going, she sold the boat in 1996. At this writing the boat lives in Sausalito, California, with the grand name of King George V.

The DUCK’s simple and appealing concept seems to have caught on and today DUCKS are being built all over in wood, aluminum, and steel. The steel ones got off to just a bit of a rocky start as I didn’t pay attention to the fact that the weight of the material would make them sit lower in the water than the plans showed. After raising the waterline on the first few, there are now optional steel hull lines that are a bit beamier in the tail section, adding some volume to support them as drawn.The thing is, a waterline is a totally arbitrary point except with class race boats that must all be the same, and all the “old time” cruising boats always sat below their lines when loaded for a trip. Cruising boats NEVER weigh the same from day to day; fuel, provisions, etc. change constantly. For more on that read STEEL hull Evolution versions which you’ll find as a “button”on the home page..

I’ve been fortunate in having several fine shipyards build Diesel Ducks however, In 2000 Bill Kimley, an old time ocean sailor who owns Seahorse Yachts in China, got interested in the DUCKS, and by 2002 had launched two steel 44 footers and was building several more. Bill took the idea but modified it a bit. He added some rake to the bow, took rake from the stern, and changed around the interior and deck layouts a little. I call his ideas “Evolution 1” because that’s what it is; good modifications, and I’ve drawn his ideas into the new versions, although I still love the original concept because of its basic simplicity.  But Bill’s enthusiasm and ideas have been good for the DUCK line and I’m pleased and flattered to have his input. It shows that when egos don’t get in the way, a good idea can be made better by talking and especially listening to, other folks who like it…..