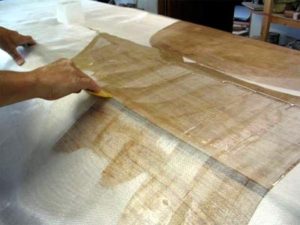 A common question I get is how in the world are you supposed to put an epoxy coating on a large plywood hull that’s sitting upright? The fear is that the resin will all run off, the cloth will slide off, and the result will be a mess.

I never thought to hard about it because I’ve never done it, then, while moving a 1958 plastic speedboat I have with a tractor I punched a big hole in the bow, and fixing made me think about it again because I did it while the boat was sitting on its trailer.

The first idea I had was to use stainless staples and staple the cloth tightly to the hull. You’d use alot of staples because you want to keep the cloth from sagging. Remember, the cloth is just to protect the plywood from abrasion and marine bugs, not for strength, so one layer is enough. Then, I’d mix small batches of a fairly “hot” mix and roll it onto the cloth with a short roller. That’s more or less how I fixed the speedboat although I used duct tape on the edges rather than staples.

I think this would work but I suspect it wouldn’t be   and you’d be faced with a terrible job of belt sanding (at least the topsides) smooth.

This is how I always suggested guys do it because it seems to me I’ve read about people doing this way when covering an old planked boat. I’ve even seen two old beater boats that people had used fence staples to attach chicken wire, then plastered Ferro-cement to it. It worked. But, when I really thought about the work involved I decided I wouldn’t do it this way if I was building a new boat.

The second idea I had and is how I decided is how I’d do it, is to coat the last layer of plywood with cloth and resin BEFORE I nailed it to the boat. That way the plywood could be laying flat, the cloth and resin would easily be put on it, and when it dries you can hit it with a belt sander to smooth it and not have to hold the belt sander up in the air.
Nail and glue it to the hull. Then, when the whole final layer is on mix some fine sawdust and epoxy and fill the nail holes. Soak some 4″ or 6″ fiberglass tape in epoxy and lay it on the butts. Touching these patches up with a sander wouldn’t be to difficult.

This seems by far to be the easiest way.

(8/23/02) A letter I just got from Hewitt Schlereth made me think about this stuff some more. Frankly, I like straight conventional planking. It’s less goofing around, looks best, and if you live somewhere where semi decent planking wood is available, is probably the cheapest system. But coatings make sense for maintenance, and with the scarcity of decent wood and the resulting high prices, a “composite” type hull is often the way to go. Especially with larger boats.

Coating hulls is nothing new. Polyester resins were used for years and still are by some people because they are considerably cheaper. There’s been many failures; many of you remember marinas in the 70s and 80s with old trimarans sitting there with the fiberglass falling off in sheets. Seeing that made it easy to dismiss polyesters, but I learned, as the following letter points out, that the problem wasn’t the resins, rather, it was the application. A system I heard about was to first paint the entire hull with a coat of resin with a very weak hardener mix, and let it sit overnight and get good and tacky. Then hang the cloth. The tacky resin holds it, makes it easy to smooth it, and keeps it from bubbling. I would still use mechanical fasteners such as ss staples. They can’t hurt anything.

Would I use polyester resin today? I don’t know. Frankly, I just might because it is considerably cheaper and when done carefully, does work. And, if it starts failing, you can rip it off and redo it with epoxy! But that shouldn’t ever be necessary….Anyway, here’s Hewett’s letter….

“The first job I had after I graduated was working with a gang of five other guys and the owner of a New York 40 (you know, 40 on the water, 60 overall) to fiberglass the old wind machine. This was in 1958. Nobody knew nothing. But the guy loved his 40….

So, we sailed into it. This was plain polyester resin (don’t know if epoxy had even been invented). We used medium weight rovingagain, I don’t know if fiberglass matte had even been developed. In any case, we’d never heard of it. As mixing guide for the goop we had a sheet of paper with resin/hardener ratios for various temp/humidity, a thermometer and a humidity gauge.

The hull was wooded, the seams reefed out and filled with a mix of sawdust and catalyzed resin. We got the first layer of glass on by painting the hull with catalyzed resin, waiting till it was tacky and then pressing the roving onto it. We worked length by length from rail to keel and… It stuck!

The second layer of roving did not want to stick to the firstthat’s what matte is for, but what did we know. So, when the resin was tacky, we hung the roving as before and four of us smoothed and held it in place while the two others stapled and nailed (copper tacks). And it worked! Last I saw the boat circa 1975, she was hauled in Stamford CT and I asked the owner if the glass was still sticking. He said that it had except in one or two places, which they had simply redone. The rudder, though, they had given up on. I guess it either flexed too much in use or swelled and contracted too much in the hauling-launching cycle, or all of the above. To make a long story short (too late, I know, I know) a boatman in Matapoisett MA, Alan Vaitses, wrote a book back when International Marine was IM and not a subsid., about making old hulls serviceable by fiberglassing them. He stresses that the glass needs to be mechanically fastened to the wood.

I was reminded of this early adventure with fiberglass when I read your method of rescuing Aquavit, which was pretty darn slick.”

Then, Ken Wells who’s building a JENNY design of plywood posted this message on the building bulletin board. He told me about it, and I copied and pasted it here. It’s pretty good.

“I’m in the final stages of building a wood / epoxy Jenny ( basically a Juna with a transom and a longer house ). Been following this thread for a while, and thought that since I’ve actually sheathed a hull, I’d jump in and tell you how I did it. It came out quite nicely, no sags, bubbles, or wrinkles. I did most of it by myself.

I used 5′ wide 6 oz. cloth, with extra layers ( 2 to 6 ) in high wear areas. Put it on in 5′ strips cut long enough to run from the keel and up around the chine 6″ or so plus a few inches all around for trimming. Same for the topsides starting a couple of inches up on the deck and down around the chine onto the bottom, giving a double layer at the chine.

Start by marking the hull where the glass goes. Then outline the area with masking tape. Unroll your cloth on a table large enough to support the entire piece and cut to size. I use a razor blade. You get less puckering and distortion that way. Roll the piece onto a cardboard tube long enough to support it’s entire length.

Next stick short pieces of masking tape ( 2 or 3 in.) to the hull every 8″ or so around the entire perimeter of the area you’re working on. Just stick the ends, so you can easily grab them with one hand. You use them to stick the edges of the cloth to the hull.

Mix some resin and roll a light coat on the hull. Let it cure until it is no longer sticky. The plywood soaks up quite a bit of resin. This prime coat makes wetting out the cloth much easier.

Now roll another light coat on and immediately while it’s still wet hold the roll of cloth against the hull and stick the edge to the hull with the short pieces of masking tape. Then unroll the cloth across the hull smoothing it into place and taping the top and bottom edges as you go. The surface tension of the wet resin will hold the cloth to the hull and it can be slipped and slid around a bit to remove bubbles and wrinkles. When you have it in place, go over the entire area with a bubble chaser ( grooved alu. or plastic roller ) to press the cloth firmly against the hull.

Then roll another LIGHT coat of resin on. Use just enough to wet out the cloth. If you use to much the cloth will float and fall on your head. Remember, at this stage all you’re trying to do is glue the cloth to the hull. You can fill the weave later. Go over it again with the bubble chaser.

Let it cure to the green stage. Then cut along the edge of the masking tape you outlined the area with and pull off the extra cloth with the tape. Use a new razor blade. This leaves a nice clean edge. Now, while that piece cures, go around to the other side and doit all again. It turned out to be not as hard to do as the books would make you believe.”

Well, these different ideas certainly give us options to think about. How would I do it? I still think I’d coat the individual hull sheets before attaching them to the hull. It seems like the less hassle although you won’t have cloth covering the fastening holes, just resin. You decide for yourself how togo!

Another point worth mentioning here is that there’s no reason to go to the expense or health risks of using epoxy for gluing plywood layers together. Remember, the plywood itself isn’t made with epoxy. And, when you glue one layer to the next you’re also nailing it to the next. Regular “Weldwood” or some other water mix glue works perfectly well, as does the jugs of stuff. I like the powder ones you mix with water because they’re very easy to use. And now, I think we’ve yakked about this stuff enough!