I think most of the small designs said to be for cruising are simply to “busy.” The designer tries to get to much stuff in ’em, and as a result, nothing is quite big enough to be actually comfortable. I do have a number of smaller cruising sailboat designs, but they don’t pretend to be anything other than what they are; a “minimalist” approach to get a couple on the ocean safely and cheaply. EMILY, at28′ and JUNA, at 37′, are my two favorites.

My powerboat designs have approached the subject a bit differently since we all seem to want a decent wheelhouse and mechanical space.It’s hard to get that in a smaller design and still have something that is reasonably seaworthy, although the minimalist approach can work with power too. My PILGRIM design is a good example of that idea, as is the big WUNDERBURG.

Anyway, my DIESEL DUCK series has captured a lot of folk’s fancy and since the first one hit the drink back in 1989 or 90, there’s been a bunch built and cruised, going everywhere from down the Red Sea to around Cape Horn. Here again, I tended to look at longer because I like elbow room, I want a stout structure(and the necessary displacement to carry it!), enough fuel and water capacity to actually go somewhere, and, at least a minimal degree of comfort. The actual “degree” has raised a bit with my age. I don’t care to do “roughing” anymore!

I had thought that the original 38 DUCK was as small as the concept could be but recently I had to reconsider. A guy down in Mississippi told me he loved the 38, but, since Katrina took out the coast, most of the rebuilt marinas have a firm 35′ overall maximum length rule. That includes pulpits, davits, etc. Why I don’t know. Possibly to make it easier to bulldoze up the ruble after the next hurricane? He wondered if the DUCK could be made smaller.

I had tried a 34 some years ago but gave up. I couldn’t get it down where it looked “right” to me. But this time, March,2009, Misters Greenspan and Graham’s brilliant economic policies, signed into law back in 1998 by Clinton, and expanded and made even more irresponsible by Mr. Bush’s incredible economic legacy, have left their mark on the world. Today I (and many others!)think a bit harder about smaller and less expensive options. So, the original 34 design was dug out, studied, thrown out, and completely redone to what you see here. It works now.

This is a boat for a couple. Yes, the dinette could drop to make a tight double for an overnight guest or two but this is a two person cruiser and if you try to change that, you’ll ruin her for yourself. Go with the 38 of bigger if you must have guest bunks. I don’t even like guest bunks in the 38.

The interior is comfortable. It has a 5′ x 7′ bed in the stern.It’s set back 18″ from the bulkhead to allow a person to get in or out without disturbing somebody on the other side. 18″isn’t much but it works. There’s two small closets and a lot of shelf space back there too. 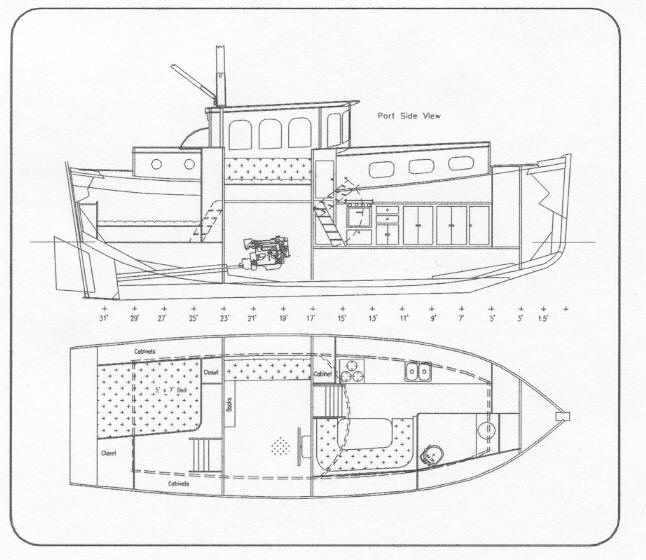 The pilot house is about the same size as the ones on the 38, 41, and the original 44. It has a helm with alot of visibility and a full length lounging couch on the port side. Outside access is via a sliding door on the Stb. side, just aft the helm. The side decks are 16″ which is comfortable to walk on but not wide enough for a swinging door. I like sliding doors better anyway and the plans show a simple way to build one.

The forward cabin has a good sized dinette that could be made to drop down into a tight double bunk. It’s probably a good idea to do that for occasional overnight guests, for resale, if nothing else. There’s a good sized galley with a 3 burner propane stove/oven, big sink., and lots of cabinet space. A double sink is shown butI’m starting to like big singles too. You decide.

She has a head big enough for a full sized westerner to turn around in. I don’t show a shower but one could be fitted in to head except everything would get wet when you use it. There’s room outside the head between the bulkhead and the galley counter. Cut off the long counter, loose the closet/pantry, and a shower could go there. I think keeping the storage is a more valuable use of the space and if it was me, I’d acknowledge the boat is to small for a comfortable and convenient shower and not have one. Most marinas have showers, and, you can hook up a simple camping type gravity shower and curtain off the boom. 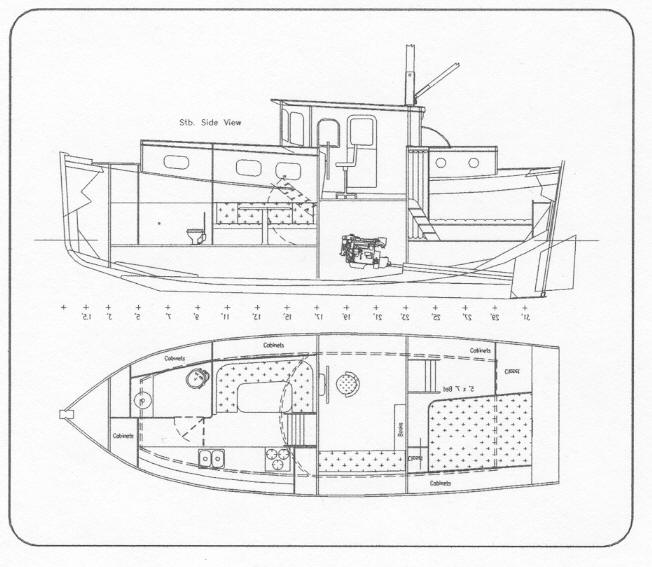 There are numerous examples of very expensive little boats out there and this guy could be too, especially if you have her custom built. But she doesn’t have to be expensive and to help keep the alive the idea of an affordable boat able to be built beside your house, the plans are available for plywood or planked wood, with a backbone structure of laminated normal dimension lumberyard wood. Good enough grades of fir, yellow pine, and so forth are available most places and can be ordered if they aren’t. The basic hull design is single chine (like the other DUCKS) so very basic to assemble. Plans are also available in steel. Between the two, steel is faster to build and has better resale if you care about that. But it really isn’t a material for a typical backyard builder.

Power is a 40 to 50 HP Kubota diesel. These are strong little engines and well proven. She has a full width engine room, 6′ long. Access to the engine can be from a door in the bulkhead in the aft cabin, a large hatch in the pilothouse sole, and another door behind the companionway ladder in the fwd.cabin. I would use the big hatch in the sole, and the door behind the companionway ladder.

Of course we have the DUCK’s signature “Modified Dhow” sailplan. This will help you along in light to moderate winds, propel you in stronger winds (the 41 DUCK reports 4 knots in 15knot wind), and get you home if the engine dies. Oh, and it dampens roll motion too. She has a tabernacle mast which will be a little hassle to lower but is able to be lowered if you want to cruise an inland waterway.

There isn’t room for a skiff on deck and as I said, the law downSouth bans normal davits in the newer marinas. Back in “the old days” people towed skiffs everywhere and if it was me,I’d like a 12 or 14 footer with an outboard and a heavy cover,I could tow behind. I’ve read of people who towed skiffs like this clear across the Atlantic. But if you aren’t in one of those new marinas than go ahead and install davits!

This is the “biggest” DUCK for the length and is sorta pushing the “troller” idea but she’s still a DUCK andI think would be a lot of fun for recreational use and coastal cruising. Yes, she could make passages but I personally would want to go bigger if I planned much of that. Not for safety, but for “elbow room!”

And here’s how the computer say’s she’ll perform in FLAT conditions….