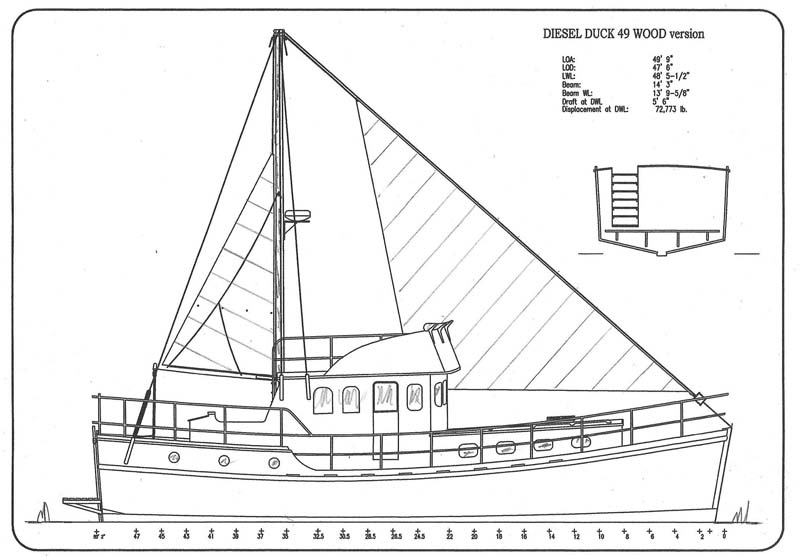 Flybridge version with sails up. The forward leaning house front can be used too. This version is easier to build!

This new design is a 49′ wood version of the steel 47-Plus Diesel Duck. That “plus” stuff refers to the “sugar scoop” style transom the steel boats have, which makes the boat about 49′ on the water but 47′ on deck, making a built in “swim step” that makes boarding from a skiff easier than climbing over the side. I wasn’t sure how to build the “step” out of wood, so gave this boat a normal transom, making him 49′ on deck. I couldn’t think of a way to make the step watertight. Plus, as shown here installing the rudder is far simpler than drilling through the keel.

That vertical pilot house sure looks severe but it is so much easier to build than the forward leaning one, so I used it. No reason you can’t lean the front forward as shown on the steel version. 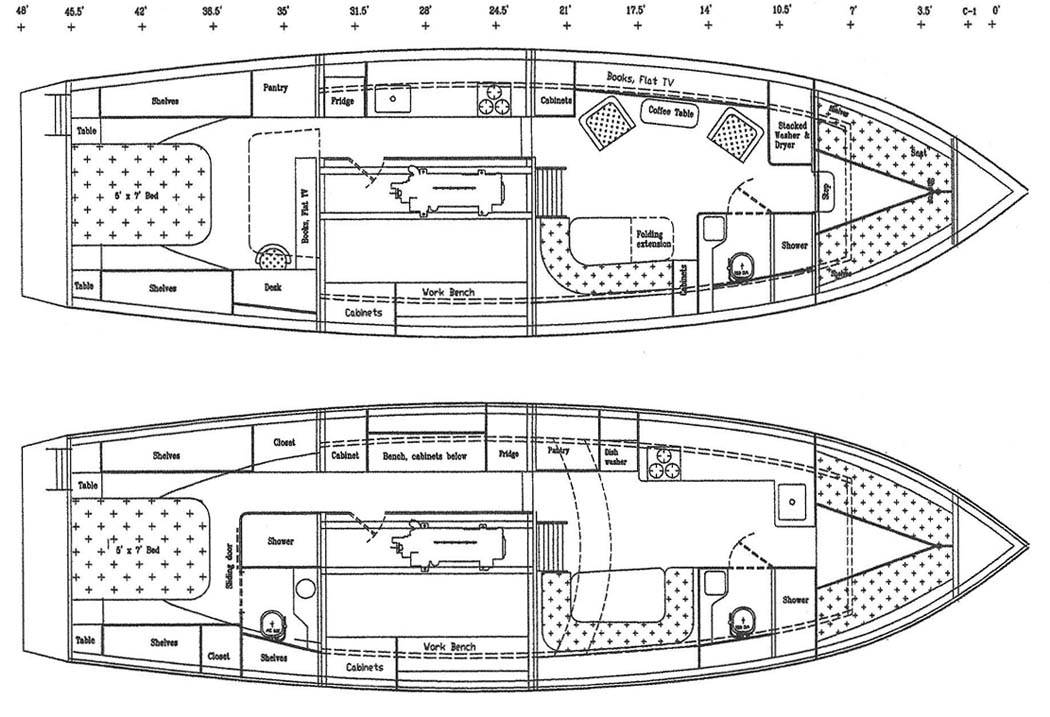 There’s several interiors shown. Frankly, I don’t know why I bother since most people have their own ideas and build what they want. I think the use of space I show is good but feel free to build in whatever you please. Notice I show aversion with the galley in the main cabin rather than off in the passageway as many of the Diesel Ducks have it. In our house we live in the kitchen and my wife says she couldn’t live with a galley anywhere else. She wants to be part of the party! 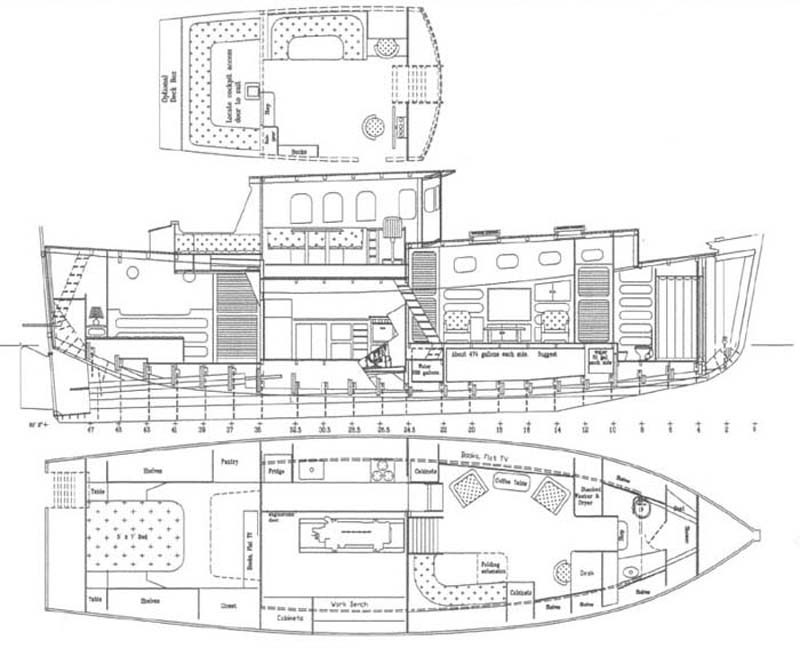 There’s also a version with one big head in the bow and no guest beds, shown above. That’s common in the RV industry. Company can sleep on “pull-outs” and meanwhile, the interior is set up for maximum use of the owners. But as I said, build in whatever interior you want! 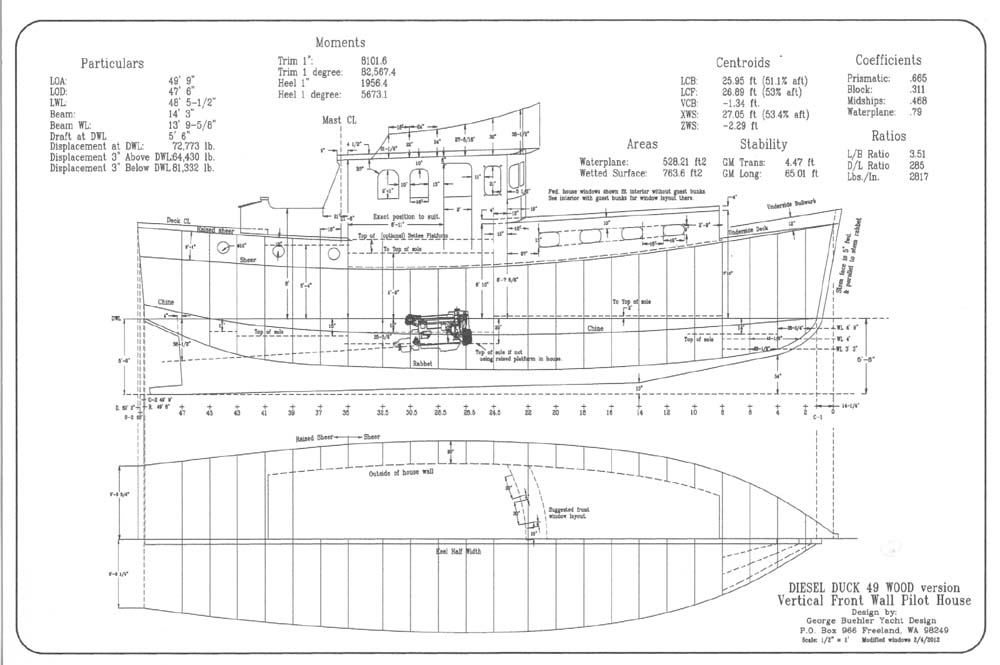 The Lines Plan, like all the DUCKS, show a simple single chine hull. The frames are two straight pieces, joined at the chine.The side and bottom are two separate planes. As much as some in the wood boat fraternity dislike me saying so, assembling a hull like this boat’s is within the ability of any house carpenter or energetic amateur. Several wood DUCKS, bigger and smaller than this one, have been home built by amateurs. 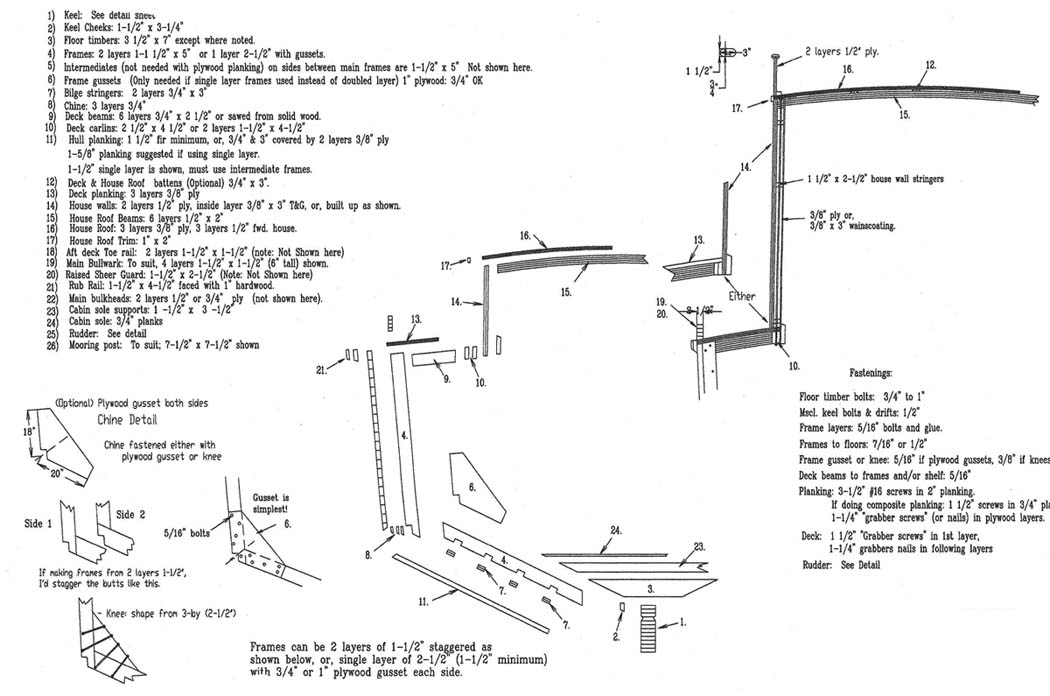 And here’s the whole construction…. 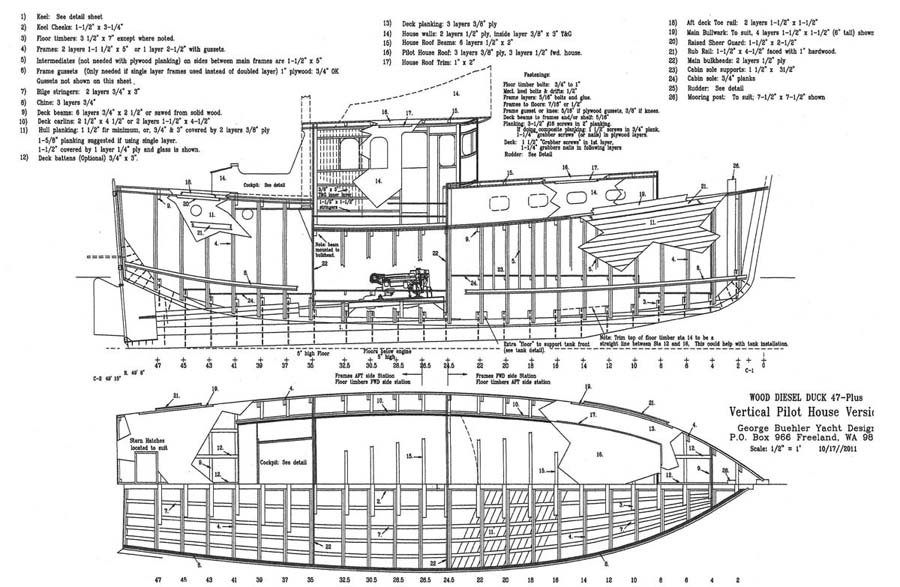 This particular boat was designed for a Brazilian who owns a teak plantation, and she will be built out of solid teak. Since it isn’t likely another will be built of teak, and somebody herein the US is building her of wood (see photos linked below), I designed the entire plan around standard dimension material available in any lumberyard.

Unfortunately there are people, and they usually have never built or paid for a large boat, who think it is very bad to use standard dimension lumberyard stock. I’ve written about this before so will spare you other than say that I agree that in a perfect world there would be air dried first growth cypress and yellow cedar and white oak and so forth, available everywhere, priced where anybody can afford it. That’s just not the way it is. Most people who actually successfully build large wooden boats understand that the judicial use of what is locally available is the only way they can ever have a boat. I don’t like this sailplan shown. I think the mast is to tall. Also, the majority of theDiesel Ducks out there (and most have actually done serious ocean cruising) have hard tops or at least a heavy folding top off the back of the house. Obviously that would interfere with the sail behind the mast so my newest “thinking” is to do away with it, and just have one big roller furling headsail. That’s all that will be used anyway and the one boat that seriously uses it, a 44 (photo below!) says it steadies the boat and extends the range. And while they’ve never had to rely on it, it would get them to land if the engine quit. 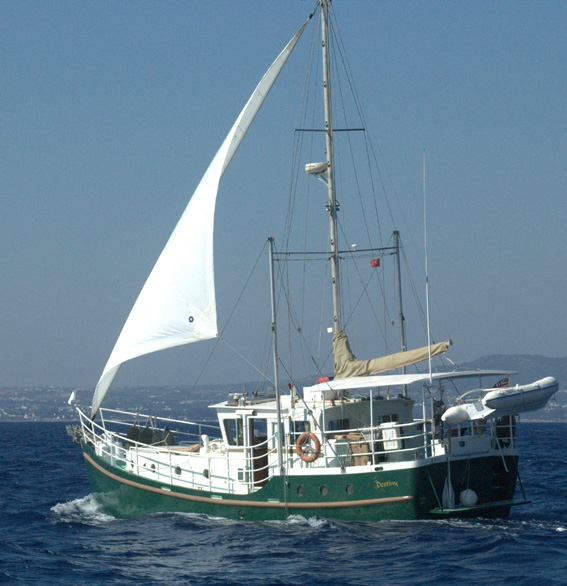 That being said, I again changed my mind and now I like a small “main” always left up for steadying and to hold the nose in the wind when anchored or drifting. The headsail shown on the drawing at the head of the page looks small but believe me, in any breeze it would be a handful even with the roller furling it should have. It too will steady the boat and will help fuel economy.

I’ve always been a wood boat guy. I’m lucky that I am just old enough to have seen and even worked sweeping the floors and sometimes butchering wood in some fine wood boatbuilding firms, so I’ll always offer wood versions of my designs. This is a big damn boat and while a big project, would sure make a comfortable cruising home.

Here’s a photo series where you can watch Matt Cerbin, In the Nevada desert of all places, build his 49!