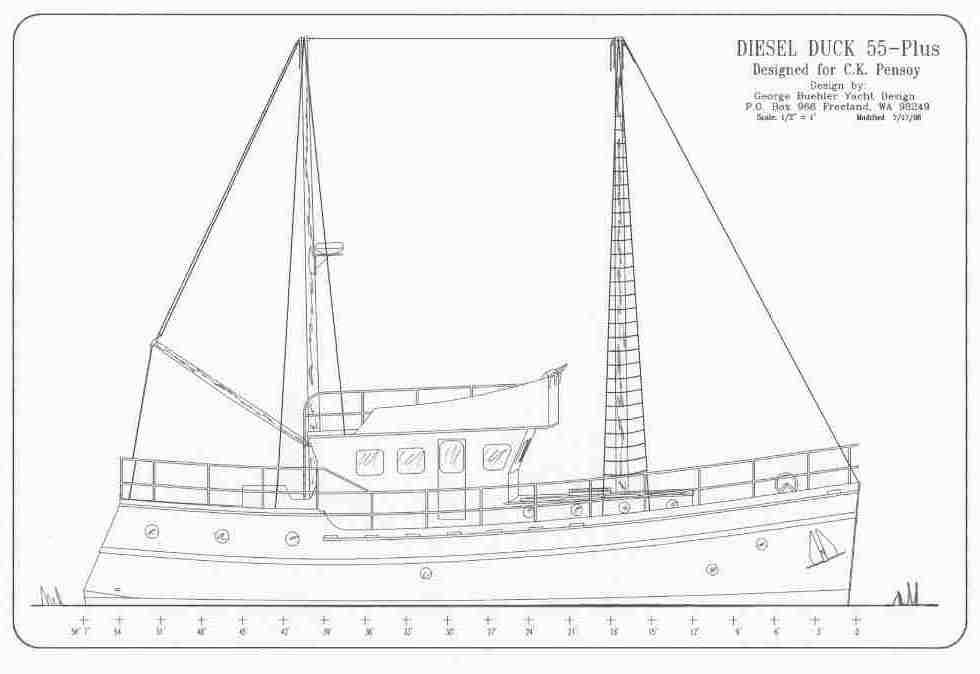 The 55 worked out just great but, as usual, a few guys wanted more room yet. So, I took the basic design and “tweaked” her a bit. I gave her a bit deeper bow and stern sections and a bit wider transom. This added 7,000 pounds to her displacement and also allows just a bit more spacious stern cabin.
She’s a real ship…. 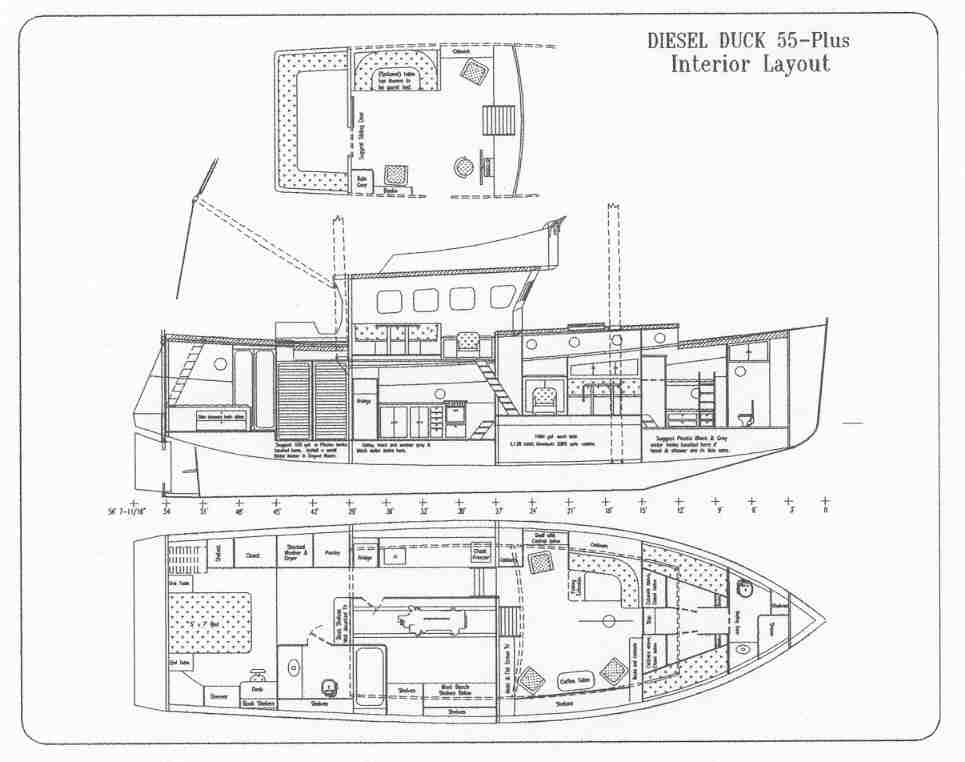 The 55 on the site has a half spiral stair starting on the stb side of the pilothouse, and a CL helm. That’s a good way to do it except I’d be just a bit concerned about taking a fall so I gave this one a “normal” stair. I think it’s less intrusive to the living space below to have it come down on the CL but that is strictly my preference and many people like the other way better! And of course, since you’d be building her, you can do whatever interior you want. Personally, I like what’s shown here as it makes quite a livable home, down to two double guest/kid cabins in the bow. The man I drew her for has two kids, and each kid gets her own bedroom with a bunk bed so she can have friends over. There’s even a large bathroom for the forward cabins. This interior would comfortably house 6, and four more could stay on the couches if they were made to convert like we seen in motorhomes. Cruising with 10 people seems a bit much to me though…. 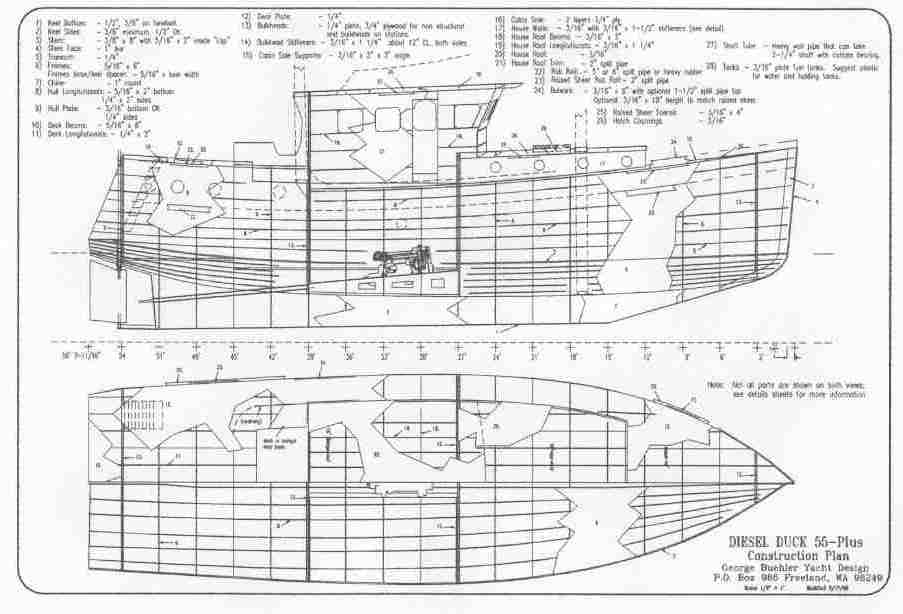 She has the typical heavy duty DUCK construction

She works out to about the same length as the 55 except she has that “stepped” transom we’re seeing on many of the new DUCKS compared to the swim step seen on the 55. Personally, I think the traditional stern is prettier but the stepped trany is certainly practical and the look is growing on me.

Given a choice between the 55 and the 55-Plus, well, I dunno. I like them both and see advantages to either. They’re both BIG boats and very livable. Don’t let my very poor interior drawings on the 55 fool you. There’s room there and one of these days I have to redraw the interior. If you give this boat the same stern as the 55, this one would be almost 4′ longer (the view below shows her like that).

I got thinking that it’s been a while since a straight “Traditional” DUCK was worked on so I took this ship but redrew her as the original concept. That makes her 59′ OD. I moved the wheelhouse a station (3′) aft because the extra hull length makes the bedroom aft long enough to do that. Besides, I like the look. I of course gave her an outside rudder. It’s part of the concept and all in all is worth it just to completely confuse the owners of new glass production “trawlers” that cross your path! 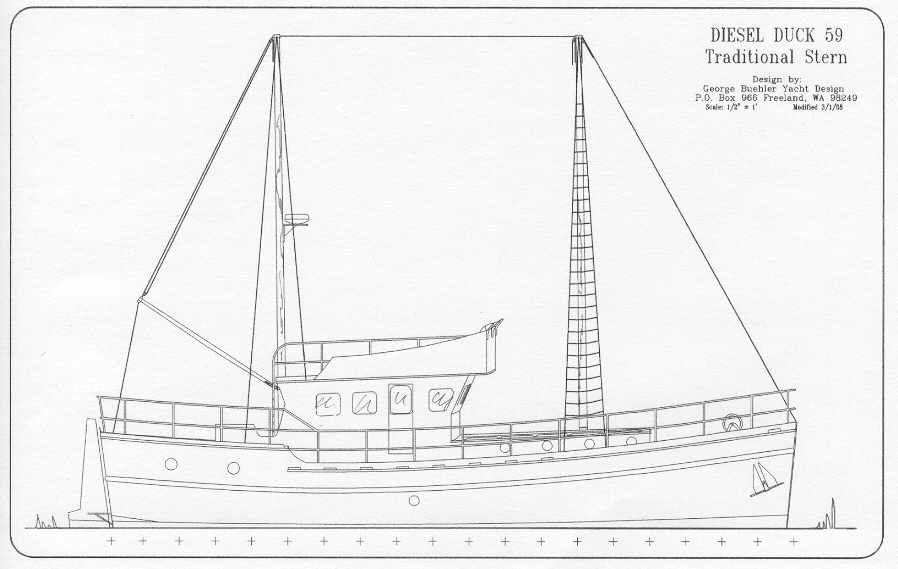 The “Traditional” profile puts the house one station (3′) aft which makes even more living space in front of the pilot house. The aft cabin will have about the same room including the huge bathroom because the traditional transom allows the bed to be moved almost 3′ aft too.. 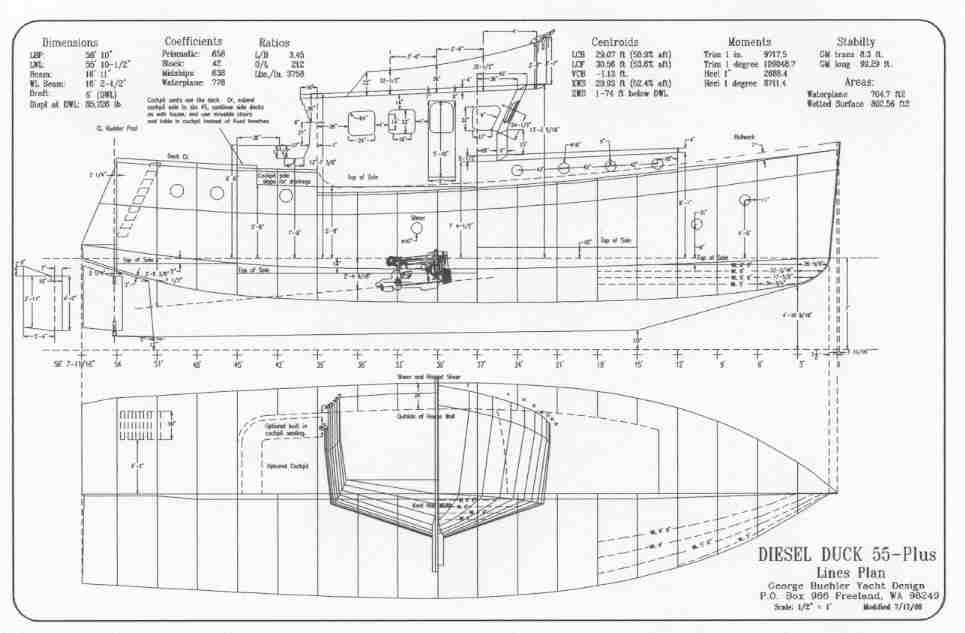 Her Lines Plan shows she is a substantial boat. Still, by contemporary standards, she’s quite trim. 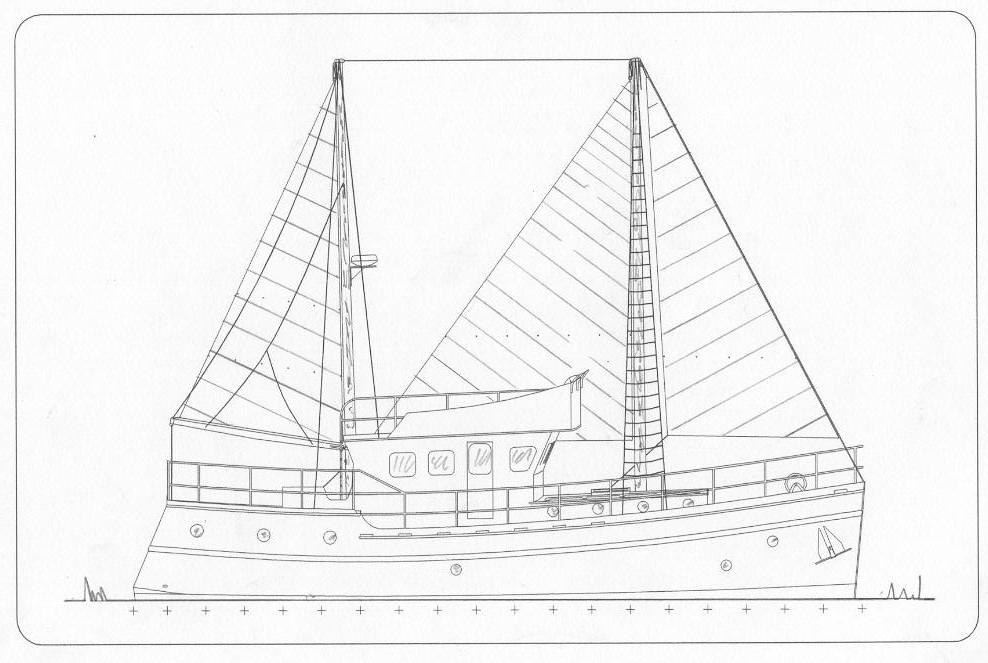 She has a low “pilot schooner” sailing rig. This will be very inexpensive, one guy can handle it, will dampen roll, will save fuel, and can get you somewhere if the engine dies. Sorry it isn’t more high tech but this really is all you need, and it’s part of the concept…. 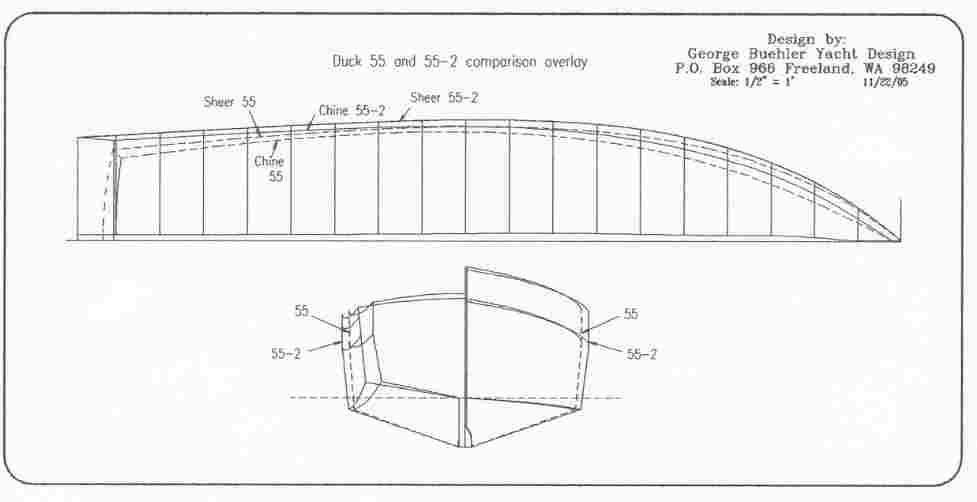 She started out to be simply an extended 55 but somehow, things changed and this new DUCK is bigger all around than the 55. The “dashed” lines show the original 55 and the solid lines are the 55-Plus. She’s a slightly bigger boat all around. I don’t know why but at the time it seemed the thing to do….