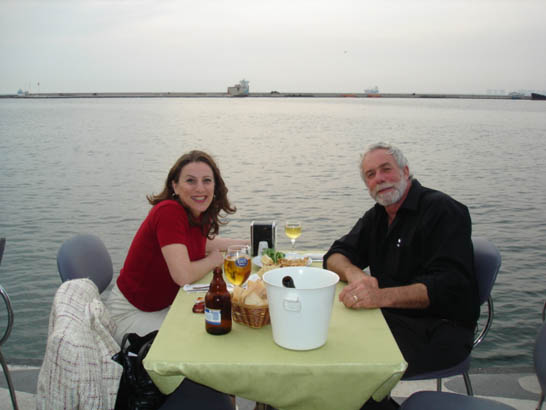 My beautiful friend Arzu and I, having dinner.

In October, 2008, I braved the trip from our quiet Island home to the Seattle airport. After more hours than I care to spend again soon, I landed in Istanbul, Turkey. I spent a night there, and as I walked around looking at stuff that song from the “do wop” era kept going through my mind; “Is-Tan-Bull, Constantinople, Is-Tan-Bull, Constantinople” and so on. The next day I caught a plane and hopped to Izmir.

Turkey is an exciting place, more so than many places you might visit because of the Moslem influence. It makes the place exotic. All the beautiful women around make it erotic too but that’s another story. I love hearing the prayer calls ringing out from the mosques, and I love seeing the people who don’t bother getting off the bar stools when the calls come. Far too many Americans don’t understand that Islam is like Christianity and being Jewish. You’ve got the idiot fanatic Fundamental Orthodox goofballs that cause all the grief, and you’ve got the “Episcopalian” side that believe Judge Not, and minds its own business. That is Islam in Turkey. The Church and the State are totally separate, guaranteed by the Constitution, enforced by the Army. The Turkish army is unique in the world because it really is 100 and 5% on the side of the people, and keeping the Church and the State separate is serious business to them. Aside from that, modern Turkey is simply too progressive and there is no way people would go back from being part of the “21st century”, as My Boy Bill would say. Fundamental Islam is even less likely to take over in Turkey than Born-Again Christians are in the US. If you doubt that, ask a Korean war vet about the Turkish army. Ask a Navy Seal or a Special Forces guy who has trained with them in one of our joint exercises.

Turkey itself is booming, and Izmir, where I spent 9 days, is in many respects the hub of this new Turkey. Izmir is the most secular city in the country so you don’t hear many mosques. Istanbul is another issue though!

Izmir is a spotlessly clean city of over 3 million, sitting on the sea, facing Greece. In fact you can catch a ferry in a beach town 30 miles down the road that goes to both Greece and Italy. While it is a very old city it is a very modern city with new construction exploding around it. It seems that here the urban planners traveled to many of the world’s cities and then came home and planned out something better. For example, there are high rise apartments being built as far as you can see. But rather than the concrete blocks we used to see being built here, buildings that will be tenements soon after they open, in Izmir, the buildings are tall and very narrow. Each unit has a balcony, and each building is several hundred feet from the next. You can see through them! Trees are planted all around, and there are even swimming pools scattered among them. The people living there seem mainly young, and I was told they flock here from allover the country because of the hot job market. Coming from the States you notice how physically fit most appear, as well as how well groomed and dressed.

Izmir sits on a huge bay, reminiscent of San Pedro. Merchant ships anchor, ferries cross, both work and pleasure boats tie, and there are many restaurants. But unlike any US port city, the entire bay is bordered by walking paths, grass, benches, stretching literally for miles.

In fact, the entire Turkish coast is considered public land and other than military bases, is almost all accessible to the public. We visited a small town of vacation homes about 30 miles away and there was a harbor filled with boats, pleasure and small fishing craft, allowed to tie up for free! There are many others like it.

Turkey is one of the safest countries in the world, has National Health, and people can collect on their social security at 48. How much longer before the age has to be raised was the question I heard. They’re seeing people retire for the pension, then get another job and retire again. Of course we see that here in the States too. We call it, when it applies to government jobs, “double dipping”, a behavior often seen in retired republicans; you know those that complain about welfare and jobs programs and gov’munt health care and such except for the benefits they soak up while bitching about “taxes” the whole time. Hypocrisy appears to be something that ain’t in their creed?Oh, but back to what I was saying, my impression is that at least the coastal areas, where I first visited (and liked) in 1983 and didn’t even recognize today because it is so modern, makes Turkey one of the most livable places I’ve ever been. While summers are very hot, especially inland, October through perhaps April weather is like a perfect Pacific Northwest summer. It’s easy to understand why many northern Europeans and recently, Americans too, are making winter homes here. It’s a long flight from the States though

The food is incredible, all fresh. The only food they import is pineapples and coconuts. Everything else is grown in country.

I ate the same every day because it was so good. Breakfasts are “part of the deal” at most hotels outside the States. The fare at the hotel I stayed at was fresh tomato, cucumber, and melon slices, 2 kinds of olives, perhaps four different cheeses, three different breads, processed meats (with this other wonderful grub I never tried that stuff), various preserves, various pastries, an orange drink like “Tang,” tea, and coffee.

A lunch would usually be a sandwich on a fresh roll, made from cheese, tomato, and onion.

Dinners were wonderful. I had fish all but once. The waiter would bring a tray showing several varieties of fresh fish caught that day. Or, some places had a display of the fish and you pick out the ones you want, then tell them how you want it cooked.

Another waiter will bring a big tray covered with various dishes of salads, vegetables, sardines, calamari, and whatnot. You choose which ones you want and the waiter leaves them. Of course there is that fine Turkish drink Riki (spelling?) which tastes like the Greek Uzo (?) but not so “sweet” it seems. And the Turkish wines are fine too!

I ate this great food until I felt really satisfied but I actually lost a few pounds over the 10 days I was there. It’s because of the flavors! Yes, the food is extremely healthy, but things taste so good and that makes you satisfied before you eat to much. That’s how it is in France, too. It seems most Turkish dishes emphasize the natural fresh flavors while many French dishes are very rich with exotic sauces which of course makes lots of flavor, which again, means you don’t need a lot to feel full. Compare that to the “low fat” ice cream, phony butter, skim milk, packaged and prepared foods and so on, we eat here. The taste is so bland that all but the “milk” products are loaded with salt. The “dairy” products are bland because much of the fat is removed. The end result is you eat far more than you really want just because you’re trying to get some flavor out of it! Turkey and France are two of the best places in the world to eat! Just look how many Americans you see waddling along, even so many young ones, and you’ll get a hint about which diet is the healthiest! I had to rely on booze to maintain my figure! 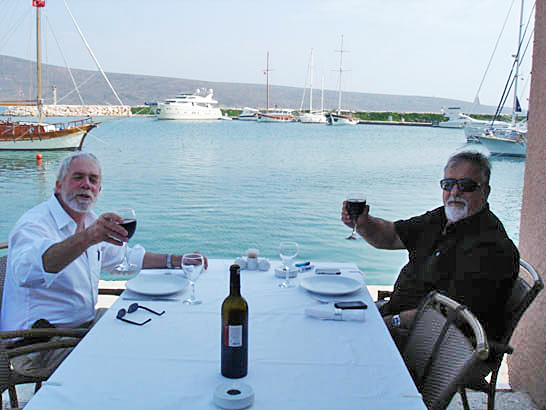 “Your Health and Prosperity for All,” from Kaya at Asboat and Me!

See the 41-Plus Diesel Duck built at Kaya’s yard, click HERE! This will steer you to our companion site Diesel Ducks.com I guess this is the beginning of blending the two back together? This web site stuff will likely always be “work in progress”….