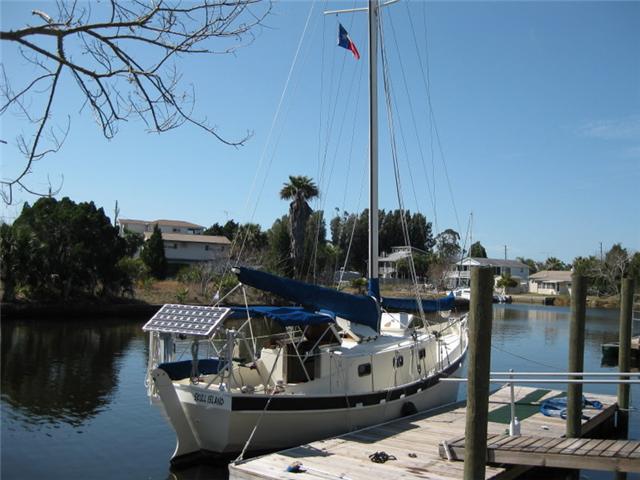 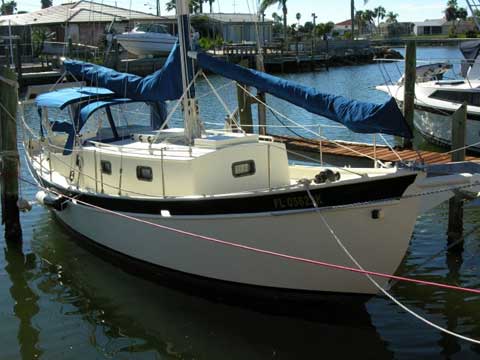 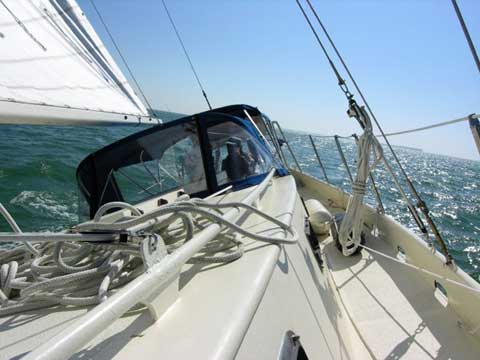 This is a good building job but that little “chicken beak” tacked below the ‘sprit looks ridiculous!

JACK is a simple  small cruising boat, just big enough to be comfortable for 2 adults.He was designed to be a boat that a person could build him (or of course her) self without going bankrupt, and has enough room to carry a couple on long trips.

His transom makes sense. By using the transom JACK has a good deal more deck room aft than a double ender. So, he can have amore comfortable cockpit and a bit more storage. I think the transom looks good, and since it’s small and on a good slope aft (like a transom is supposed to be!) it should be as seaworthy as a pointed stern.

The interior is set up for two people to live in. I’ve used this interior on a 26′ boat, a 36 footer, and am building in pretty much the same thing in a new 50 footer. It’s the best use of space for a cruising boat that I’ve seen! 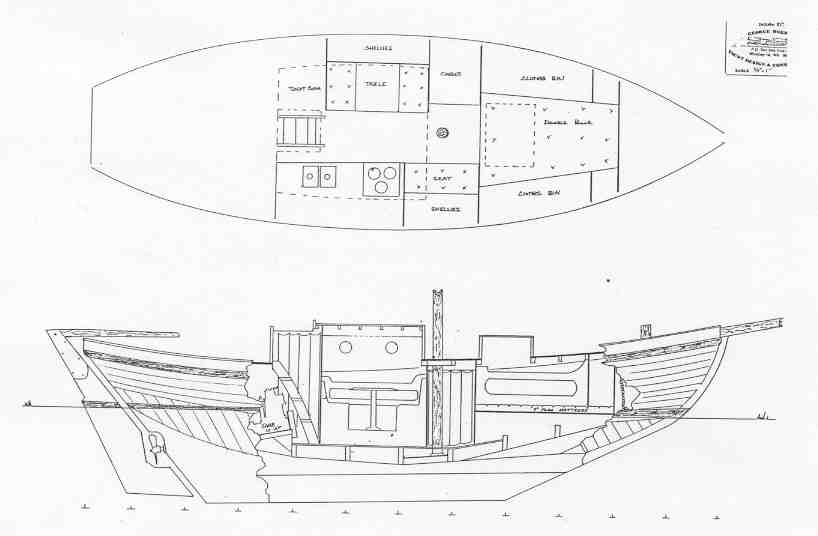 The idea of the interior is to use the space completely for the owners. Company can sleep on deck. JACK is to small to have spare beds, you see, unless you completely mess it up for you. This interior gives a large double bunk with tremendous storage below it. There’s a dinette table that’s big enough to put a meal on and seat two, and is raised up so you can see out the port lights.The galley has a 3 burner propane stove and oven, a double sink, and enough counter space to work. There’s a small toilet room and rain gear storage area. There’s storage areas all through the boat.

The short cabin robs interior room, but, this is over the bunk so it doesn’t matter, and in return you get the deck room to carry a real skiff. Few boats this size can do that, and I think it’s essential when cruising to have a good dinghy. Rubber boats area pain. They don’t row well, are a hassle to deal with, and generally get stolen anyhow.
Headroom as drawn is 5’6″ to the house beams. I should have made it 6′ and I suggest you raise the freeboard 1 plank (3.5″),raise the house walls 3″, and add maybe 1″ to the roof crown. That way you’ll gain 7.5″ giving 6′ 1″ to the underside of the roof beams which is enough for most people. This boat was designed back when I didn’t give a hoot about anything but the outside profile, which is why she didn’t end up with 6’plus headroom. But as I said, that’s easy to fix if you want. 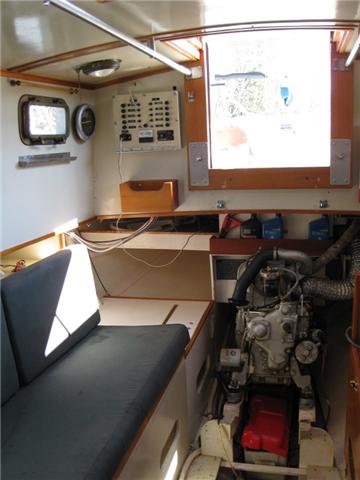 The engine, although interfering a bit with the living space, is fully accessible for easy maintenance. This is essential. There’s one production boat on the market where you can’t get to the stuffing box!

Water and fuel tanks are not specified. I recommend two 25 gallon water tanks on each side of the cockpit, and then carry another50 gallons in 5 gallon jugs stashed around the boat. When you’re cruising you’ll be anchored out, rowing in to get water anyway, plus the multiple tanks mean you’ll never loose your water. Suggested fuel is a 10 to 20 gallon tank, with a 5 gallon container for backup. These things can be changed, if you want, and many people like more. But, 1 gallon water a day per person is a comfortable ration, and the small diesel doesn’t burn much fuel, so I’d use this tanking idea. 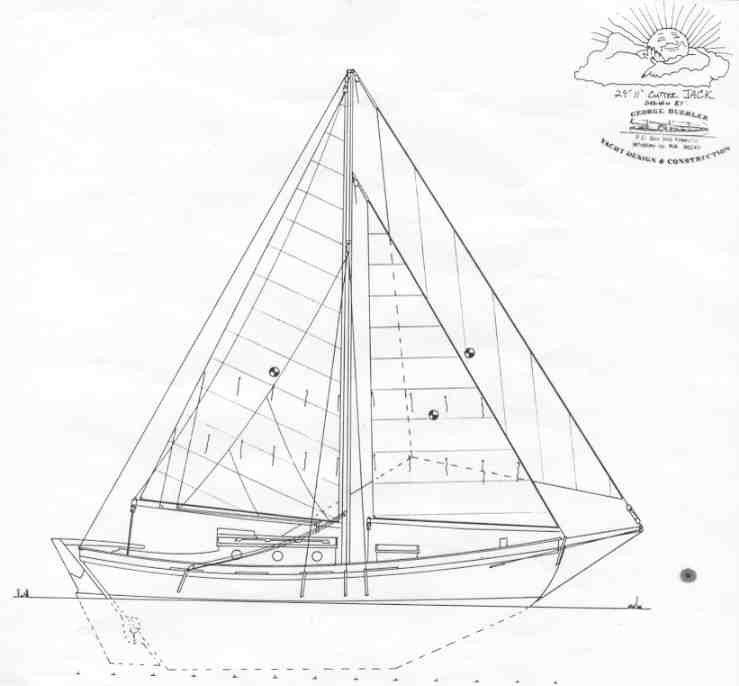 This is her as designed. The one in the photo looks like they raised the freeboard maybe 6″ or so.
I think that’s a good idea.

Her cutter rig is simple, versatile, and very strong. It features multiple reefs so it can always be controlled. All sails are small enough to be easy for one person to deal with. A large genoa can be carried for light weather if you want to, but JACK’s sailplan is a good one as a working sailplan for real cruising.

Construction is either wood, plywood, or steel. The single chine hull is simple and quick to build. The wood/plywood versions use materials available in any lumberyard, and the steel version is quite simple too. Both versions are quite stout and make a very strong hull.

JACK is a good choice for a small cruising boat for a couple.He’s simple, affordable, very safe, and not bad looking if I do say so. Perhaps the best thing is that he’s obtainable. This isa feasible backyard project. He shouldn’t cost a fortune to build and could be built in under two years of part time work; far less time if you keep at it and don’t goof off to much. 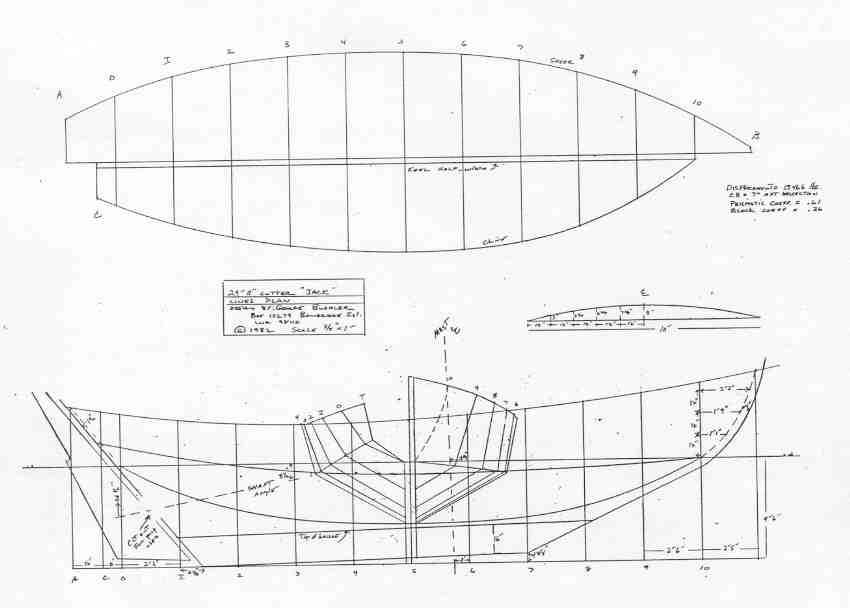 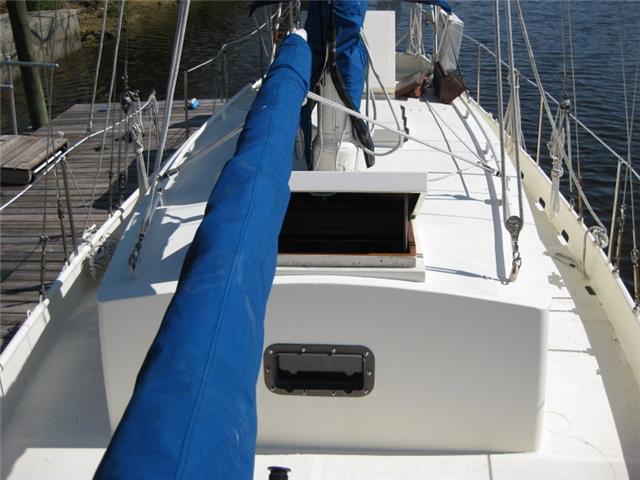 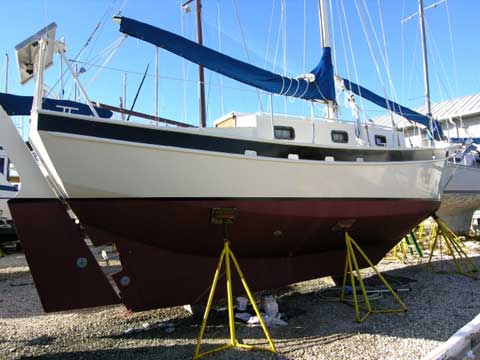