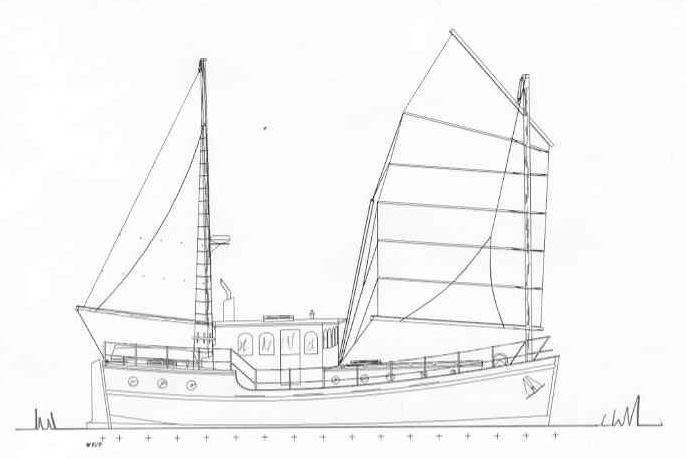 (4/01/01)
A common question I get is a variation on….”hey; the sail rig on the DUCKS and the other powerboats you show with one mast looks weird; the mast is to far back. The headsail luff is raked to much and the foot overlaps the side of the wheel house so much it would need to be walked around when tacking. You really think that rig will work?”

No, of course I don’t think it will work. That’s whyI drew it on all the boats, spent hours working up the sail and rigging plans, and devoted a chapter to it in The Troller YachtBook…..

To try to be serious…. I realize that sometimes when you’revery close to a subject things seem clear to you but you don’t explain them well, and by putting sails on these boats many people think they’re motorsailors and then think the rig is goofy because I guess I never made it clear they aren’t sailboats. A lot of thought went into that rig idea and here’s whatI was thinking.

1) The mast has to be aft of the house because if it is forward of the house (like I’ve seen some modifications to the DUCK being planned), the boom will be to high for you to reach the sail easily, and the boom will strafe the roof of the house and take out antennas, lights, exhaust, and the radar when you change tack or need to swing it over. As designed, the boom doubles asa cargo hoist and with the mast aft the boom can easily be used for hoisting a skiff, motorcycle, or what-have-you to the back deck which is where you’ll likely carry things.. The boom is short and heavy. A friend used his as hoist to lift a small diesel out of a sailboat in the marina.

Is the mast to far aft to support “flopper stoppers?” I don’t think so. I also think there’s no need for floppers when you have the small main up except maybe in the case of big swells and no wind, a not unusual but still not common situation.

2) These boats are NOT sailboats. Yes, the hull type isn’t much different from many old time working sailboats; if we lost the pilot house and lowered the freeboard some, we could make a sailboat. In fact, check out GULNAR’E shown in the Drawings & Photos section of this site. She’s essentially a DUCK, but built as a sailboat.

You could possibly call these “Troller Yachts” motorsailors, but that implies more emphasis on sail than they have. The larger ones, like EGIS and the others with two masts, could almost be called motorsailors although the sail area isn’t much because I didn’t want the expense or windage of having a serious sailing rig. So, as they are now, they still ain’t sailboats. I call this rig idea “SailAssist” rather than “Motor Sailor.” It’s not just semantics; it’s a different intended use than what is behind a boat that is actually a “motorsailor.”

A) Heaving too: The mast aft and the small “main” will serve as a riding sail. This will be left up at anchor holding the nose straight into the wind. If you want to fish, or, drift and sleep some night, the main will hold you “into”it. If you get in awful weather, the reefed main (and they all have 2 to 3 reef rows) will hold the nose into the waves. These are good things and almost unheard of with powerboats.

B) Sail Assist: The vast majority of your cruising will be, like with a sailboat, off the wind. That’s because it’s to damned uncomfortable to beat against the weather in any small boat, so, you’ll cruise on at least a reach, probably a broad reach actually. I’ve never liked going due down wind if there are any seas because the boat rolls to much, so I tend to takedown wind on broad reach courses.

This rig should be ideal here. The big headsail will balloon out and pull us along fine. I’ve heard people say that it won’t work because the “angle of the dangle” (the rake of the headstay) is to extreme. But, if you look at the two of the best examples of small boats planned solely for off wind use; the Arab bow and the south pacific proa, what do you see but an extreme rake to the luff. The European square riggers were off wind boats too of course but those square sails are a first class hassle. In smaller boats designed for monsoon ocean sailing the Arabs had the right idea. Them and the south Pacific islanders would head out with the trades, sail and do whatever business they had to do until the season changed and the trades switched direction, then sail home again. They do need to do a little tacking in ports, but they’d tow their ship with rowboats in tight spots, just like we use our engine.

In fact, you CAN’T “short tack” with the sail assist rig shown. Somebody has to walk the headsail around the house.But at the risk of being repetitious, it was never meant to be able to short tack, the boat isn’t a sailboat so there’s no reason you’re going to want to short tack, and the rigs I’ve seen that try to make it look more like a sailboat don’t do as well as this one will off the wind (and have the other failingI mentioned) which is the only time you’ll use it. The partial exception to what I just said is the “Bubak Junk Modification”you’ll see as an option (so far) on EGIS, ALCINA, and the 48′ DUCK.

In stronger weather you can probably use sail alone, but, I likely wouldn’t because the speed will drop. Again, these aren’t sailboats and the sail area isn’t much to the displacement. Why sail at 4 knots when you can idle the engine and cruise at7 or 8 knots with the sails up; 8 or 9 or more in the bigger boats.So instead of shutting down, I’d throttle back until the engine is running at just a fast idle. This will make a major difference in the fuel you burn.

C) Emergency Power: There’s always the chance of your engine quitting, prop and shaft getting destroyed, fuel all draining out of the tanks, stopping the engine and finding ALL your batteries are dead so you can’t restart it, or something else unlikely and strange but not impossible happening that stops your engine  cold. In most powerboats if that happens you’re out of luck.

Some boats rely on a second engine, but that still makes you dependent on this “thing” actually starting and doing it’s job. In between times you use it, and in practice you probably never will use it, you have maintenance on it. And of course the expense installing it in the first place. And unless it is a gen plant with a belt drive to the shaft, all it does ever after is sit there looking expensive and needing maintenance.

The belt off a small gen plant (and why do boat owners tend to get carried away there? We have 5KW wired into our house for when the power is out. It runs EVERYTHING except the dryer) is an inexpensive choice, but if what stopped you was a problem with the prop or shaft that won’t help you.

You can carry a spare prop and “puller” and if you’re”feeling lucky” about the chances of ol Jaws not being under the boat, you can switch props. But if the shaft is ruined your dead in the water.

Here’s how easy that can happen, and luckily for me it happened right at a marina with a sandy beach I could have careened on if I had to.

Heading into the slip, I set my cocktail down and nonchalantly goosed her in reverse to quickly swing the bow to the left and stop. I was rewarded with a huge “CRACK” sound and .I threw the control into neutral as the boat kept going forward and banged into the dock. Odd. I tied up, then looked at the engine. I was sinking!

Here’s what happened.
I hadn’t paid attention to the bolts holding the shaft coupling to the engine, and 3 of the 4 had vibrated out. The last one had held, but, when I threw the control into reverse and goosed the throttle, the prop was pulling against the coupling, and the nut on the last bolt stripped and slipped but didn’t come off.The shaft moved back 3/8″ and was stopped by the nut but the “lips” on the two couplings that line them up were now not together. That meant when the engine rotated the one bolt in one hole of the shaft coupling became the rotation center.As the point was 2″ or so above the CL of the shaft, something was gonna give. You wouldn’t think a 5/16″ hardened steel bolt would be so strong but it was able to bend the 1 1/2″prop shaft, and partially rip the “stuffing box” off the keel. This left a big area for water to come in.

I did an emergency patch on the leak by jamming cotton balls (my wife always has cotton balls for some reason) into the opening, than tore up an old shirt, rolled the strips into sort of a cord, and jammed them in using a hammer and screw driver as a caulking iron. I now carry caulking irons on any wood boat I’m on. This got the leak down to a trickle and I was able to leisurely haul the boat. But I had to pull the shaft, have it straightened, remount the stuffing box and shaft log thing (it wasn’t through a heavy keel but rather, bolted to the bottom of the hull; the boat was an old Chris I thankfully now don’t own), re-drill the coupling holes since the threads were shot, find very skinny nuts to re-bolt the couplings together since there wasn’t the room between the trans and the coupling for a normal nut.
In other words, if this had happened out in the ocean, and it could of; you see a bit of “flotsam” and stop to check it out, you’d be dead in the water, and no “belt drive to the shaft” system would help you.

Anyway, feel free to put a more “normal” sailplan on the boats if you want. But think about what I’ve said. I think it makes absolutely NO sense to put a sailplan on these boats that’s designed for pointing, and, while not impartial, I really think the sailplan as designed is the best way to go.