Thoughts about Sailplans and why I like Cutters for cruising

Most of my sailplans are moderate aspect, with multiple reefs, straight leach mains without battens so you can easily reef without the need to turn the bow into the wind, self-tending headsails; heavily and simply rigged. Many of my designs, even larger ones like DRAGONFLY 64, are planned out to be able to be single handed, which makes then ideal for short handed cruising.Don’t be scared by the bowsprits. As contemporary racers have re-discovered, a ‘sprit is a cheap way to carry extra sail, and adds a bit of class to almost any boat. I have a system of rigging the headstay on a tackle so you never need to go out on it if you don’t want to. Instead, the stay and sail comes to you!
Rig types come and go in fashion and the fact is that none are better than the other. They all are great in some situations but poor in others and should, like all rest of the boat, boil down to personal preference or fantasy fulfillment. In the 1970’s there was an old boy who floated around Seattle’s Lake Union in a 14′ Brigantine. Practical, well, no, but what fun! That’s what it’s all about, remember?

Many people choose a cutter as a cruising rig because it is the most “practical.” A cutter rig is the cheapest to erect, he easiest to securely stay, and when designed with a moderate aspect ratio, a self-tending boomed staysail, and a jib, a cutter is the handiest and probably most efficient in more different situations than the other rigs.
But pick what YOU want, and most of these designs can have a different rig drawn in if you want me to. Being practical isn’t everything and my very favorite rig to look at is a properly proportioned schooner. Schooners aren’t popular today. Most current designers only think about pointing and the schooner rig points the worst of any “fore and aft” rig. On the other side, it’s the most efficient OFF the wind and the old pilot schooner rig with its overlapping foresail is so powerful off the wind that it was banned from ocean racing. Have you ever noticed that all of today’s “performance boats” carry good sized engines? You put an engine in a schooner too, you know, and nothing points as high as the “iron jib!”

But the big problem with small schooners is that the makes the main harder to securely brace than a cutter or ketch, and the fore will usually be in the way of a bunk. But if you like the look, and there is nothing prettier than a schooner, all sails drawing, then go for it. You only live once. I offer plans for schooners as small as 16’.

Now then. The illustration following this rambling shows why I like the cutter rig for short handed cruising. You’ll note how easy it is to reef down in SMALL increments, keeping you in control. I started doing this after I almost lost a boat in Mexico. I took the sailmaker’s advice and had just two widely spaced reefs. Well, I wasn’t paying enough attention and in a blow found myself on that proverbial “lee shore.” With 1 reef in I had to much sail up, and with the deep 2nd reef I didn’t have enough sail to power through the waves. I didn’t have an engine (no more of that silliness!). Well, my next boat hadLOTS of reefs, and every sailplan I’ve done since has them too.Many people think it’s silly, but, I learned the value of it…. 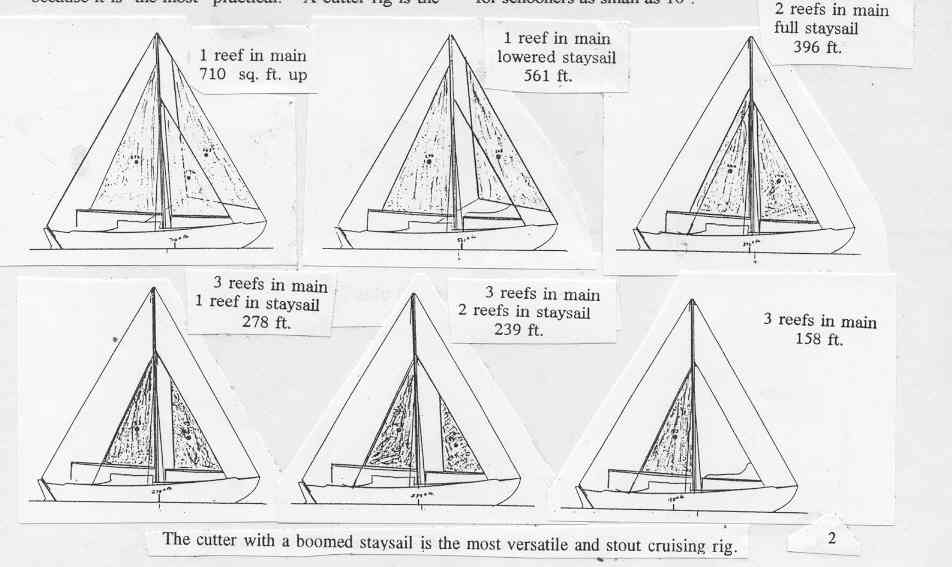