I’m frequently asked about “NC” or “Cutting” Disks. This refers to a computer disk that can be inserted into a machine, which then burns out every piece of the boat, delivering you a pile of steel that all you have to do is weld it up; no fitting, no pattern making.

Yes, I can provide them, but, here’s the other side of it.

While all of my work is done in AutoCad, it can’t make the full cutting disk because it can’t figure the hull and deck plate. All the straight pieces will work; the frames, tanks, keel, deck beams, and so on. But the parts that wrap around and need to be expanded out require a computer program that can figure it, then write an Auto cad file with the info that the cutting machine can read.

There’s a couple out there. I bought one of them even. It cost me $4,000 which was a hugely discounted price. It works incredibly well.

The problem with it is that it is totally incomprehensible. I went to several training classes and it was STILL incomprehensible.I contacted several people around the country who had bought it and went to training. They STILL couldn’t do it. One was even fired by the shipyard she worked for after she attended training and still wasn’t able to do it. I know the program works; some guys, aside from the developers, actually use it! But like the other people I contacted, I gave up, and got my money back.

I can still provide the cutting disk, but, I hire it done; one of the inventors of the program makes it for me. It costs me $7,000.00 to make. That means it costs YOU 7K on top of the plans price. But the deal I offer is that if you pay for the disk, then I offer it for sale with the plans for $3000 on top of the plans price, and I split that with you each time somebody buys it (if anybody buys it of course), until you’re paid back.

But here’s what you should think about first.

No pro builder that I have talked to believes it’s worth it for one boat. It isn’t cost effective, you see. The labor saved by using the disk does not equal the costs. These costs are 1) making the disk. 7K is a deal. They normally cost 9 to11K for a moderate sized yacht. 2) Buying the steel. If you want the steel cut, it has to be shipped to one of the few places in the country that has the computer guided cutting machine. You pay for the steel, you pay for the cutting, and you pay to have the steel shipped back to you. For example, a guy I know paid $75,000 for what amounted to maybe $30,000 worth of steel, that of course still needed to be welded together. That $45K difference was far far more than the labor would have been to simply build the boat.

If you’re going to do a production run of three or more boatsI hear it’s worth it. If you’re building a very “curvy” hull, say round bilge with all sorts of “streamlined” shapes to the house, it would simplify things so is likely worth it. But I personally don’t see any reason to do it for building one of most designs.

However there’s a new program out there called “Rhino.” You can download a 30 day trial copy off the net. It costs less than $900, and, they offer three day training classes for $600. It will read AutoCad files, so I assume you can enter the hull lines from my disk, then work up the cutting disk yourself if you have the energy. I have a hunch it is as complicated to operate as the one I tried, but at least the price is reasonable and one of these days I might try it.
By the way, Flounder Bay Boat Lumber, in Anacortes, Washington, has a computer guided machine that reads AutoCad files and runs a big router on a 10′ x 10′ table. It will cut, I believe, wood to 3″ and aluminum to 3/8″ thick. They make plywood boat kits with it, and I’ve thought it would be a slick thing to use to have the wood parts for wood parts like hand rails, maybe a complicated hatch, or whatnot. “All” it needs is for the part to be drawn in AutoCad. You can contact them for more info if you’d like. Erica & Bob Pickett, 800-228-4691. Email is boatkit@flounderbay.com and their web site is www.flounderbay.com. Aside from the machine and small boat kits, they also offer exotic woods custom milled, various exotic (sometimes erotic) tools and fittings, boat books, fastenings, and whatnot. A nice store in other words. 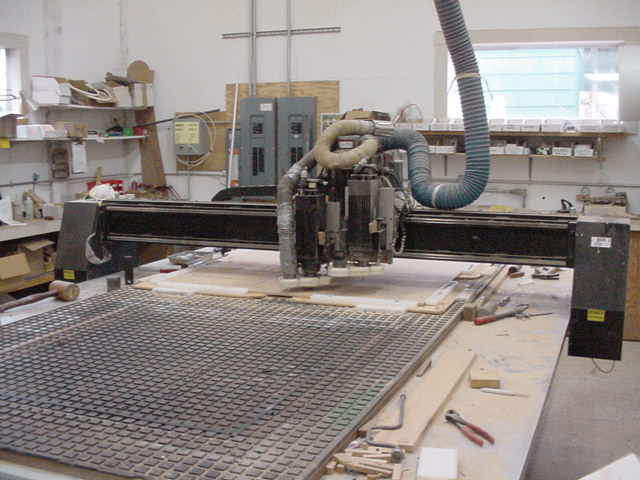