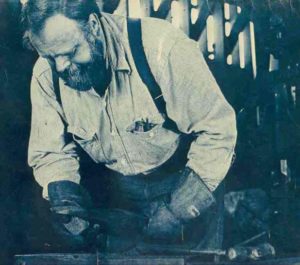 Back in the 1970s or 80s (I forget) a new crab boat was launched near Seattle. It got maybe 50 miles from the dock on its maiden run to Alaska when suddenly a plate or two “blew” off and she sank. The reason was the “Welding Sequence” had been wrong, and stresses had been built in that were so strong they exploded a plate off.

The correct way to weld long welds is well documented in several of the steel building texts. Essentially it boils down to skipping around and not doing to much at one time in one place. It isn’ta big thing to learn the basics of. For proof of that, look at all the home made steel boats out there. This particular PROFESSIONALLY built boat is the only one I’ve heard of where a plate actually blew although come to think of it I think a guy told me he had a Diesel Duck keel develop a bad warp because of welding all on one side.

Anyway, “welding sequence” is an important part of building a steel boat. As I said, it apparently is well discussed in the various steel books out there (again, look at all the home made steel boats!) and far as I’m concerned, anybody who claims to be a professional steel boatbuilder should know all about it. Period.

But I guess it’s a New Age. A guy who has been trying to get bids on the west coast for a new 60′ steel design (theDiesel Goose 60) told me the shops he talks to all say they want the designer to furnish the “welding sequence.”

Off hand I can think of only one designer who actually really knows steel and who’s word I would take on “welding sequence.” That’s Tom Colvin. I’m sure there’s others of course. I can think of only a handful who I think know anything about wood construction, and if you’ll forgive me,I happen to be one of them. The majority of the designers out there may have read all the books but have NO first hand experience building anything.

So, if a pro shop tells you they want the “welding sequence” written out I would run. I don’t believe any shop that knows what they’re doing would dream of asking for that. I’ve worked with a number of pros and I’ve never heard of such a question until this particular boat, in Nov. 03. Interestingly enough, all the yards he asked also want a cutting disk. Yet they claim they are experienced builders…..

Finally, keep this in mind. If a “welding sequence” is provided the odds are it was done by somebody who never welded in his life but read about the sequence in a book. As I said there isn’t much to it. I would far rather rely on an experienced builder’s knowledge than the written down instructions of some guy who has never held a torch but has read a book. And for that matter, unless a trusted paid employee is standing there and watching every weld you have NO guarantee the shop is following the specced or any other correct “welding sequence.” That means the specced (is that spelled right???) sequence would be a useless court defense. How can anybody know if it was followed or not?

So, I do not provide a “welding sequence.” I see it as an attempt by a very few builders to avoid the liability of their own poor work. If you are building a steel boat yourself, be sure to read up on correct welding sequence. If you are hiring a yard to build it, if the yard wants a specced “welding sequence” I would, if you, assume they don’t know what they’re doing.