The following is my reply to a guy who is having a new 462 DUCK built and asked me about fins, or “bilge keels,”as they’re called, to dampen roll. I don’t think much of the idea!Since I get this question every now and then I decided to post parts of my letter here as a “Random Thought” so I can, like I do with much of the other stuff, refer the next guy who asks me about it to look here!

I’d not put the heavy ballast in it because even with a more dedicated sailing rig the boat is still, at best, a motorsailor which means it won’t be tacking to weather, which means it doesn’t need the low ballast to hold it up. All that will do is help make a jerkier motion. In my opinion anyway.

Don’t dismiss your thoughts on naval artichokure. Years of experience on boats is worth far more than knowing which text book has which formula to prove which assumption. No, I have no problem withMr. XXXXX (a Famous Naval Artichoke who advocates stuff like fins)used on it. My observation of his work is that he gets off on some interesting tangents that result in unusual shapes that at the very least raise hell with construction costs. I’m sure they accomplish wonderful things but how much more so than NOT adding them is the question, and of course how costs are effected is another good one. For most people anyway.. He describes model studies that prove his points and I won’t argue them. I personally follow L.Francis Herreshoff’s thoughts on models in that the scale stuff and full size stuff are different. But as I’ve said, I am stuck in my ways and no, I couldn’t work with him on it because as I’ve said, I think the idea is a mistake. Frankly, I think about everything related to safe seagoing powerboat design was worked out by 1930. I think if big fins had much positive effect they would be commonly seen. That idea is NOTHING new and has been used for years on sailboats and some powerboats that were required to stand on their feet at tide changes. Yet the same countries and designers and seamen who used these types of boats, when keeping their boats in deep water ports, even with fishing boats and ferries where slower roll and more stability would be appreciated, didn’t use the fins. They weren’t all inbred and unimaginative hicks so I suspect they too thought the fins didn’t do anything for stability…..

But that’s just my opinion……

I also think that many of the new designs that use these odd bulges and protrusions all share the similarity of being way to high and wide for their length, based on proven seagoing design ideas, so anything they can do to help their motion is appreciated. Most of these new boats are about as similar to the DIESEL DUCKS as a dump truck is to a pickup. The captain of one of these new creations told me if his stabilizers ever failed he believes the boat would roll over………

Anyway, that’s what I think about that! 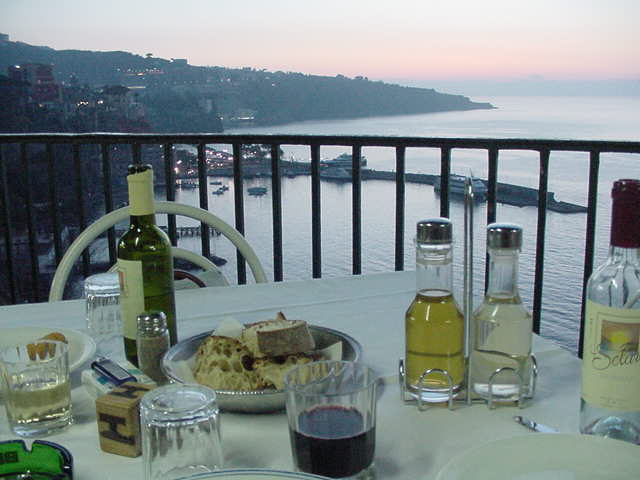 View from our table in Sorento, Italy, March 2004. Nice little town. Rich though…. I realize this photo has absolutely no connection to the subject here but I was thinking about it so decided to post it!