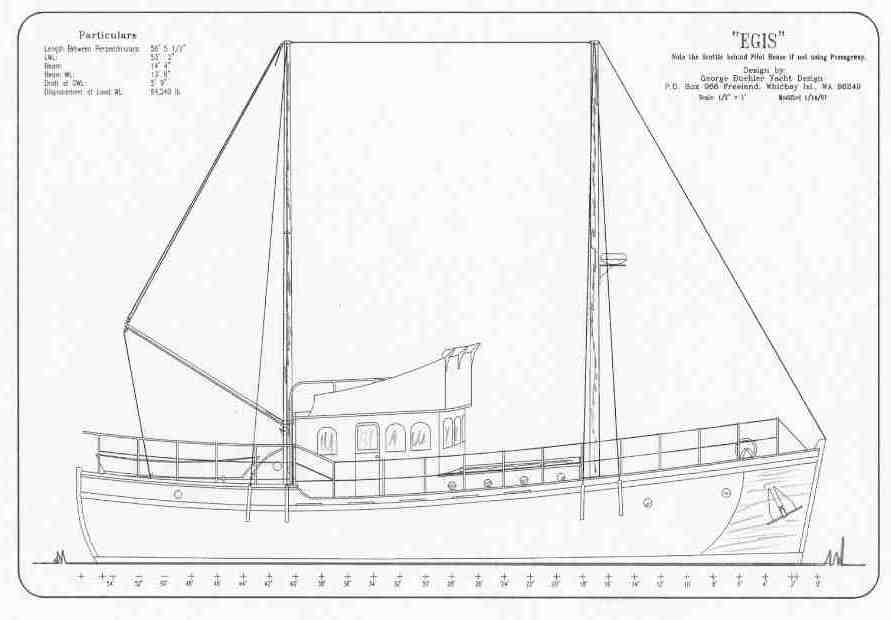 New wood version Profile showing a raised deck house fwd. rather than the flush deck. I think the fly bridge doesn’t overhang the house far enough. I’ll fix that one of these days…. 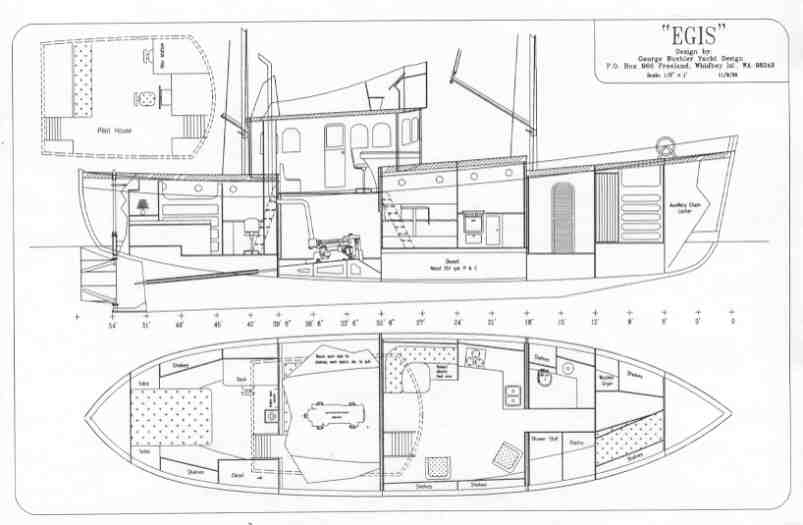 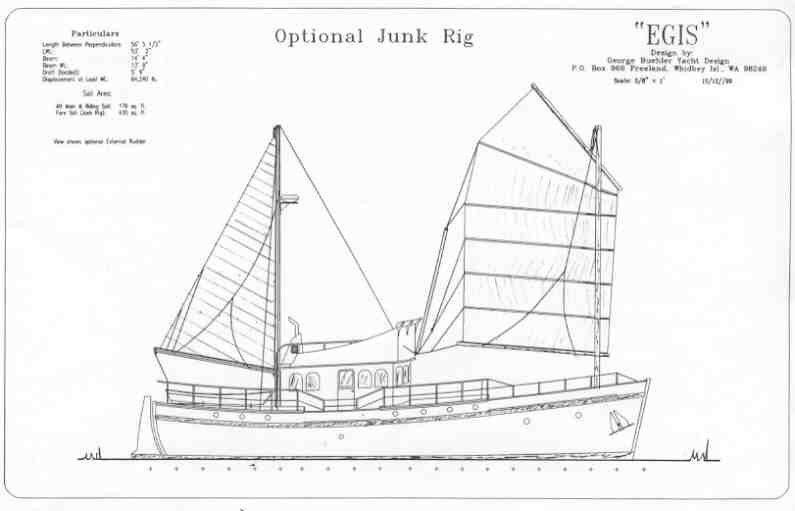 This drawing shows her with the optional “Junk” rig, dreamed up by Paul Bubak in Seattle. I think it makes a lot of sense for off wind use and I’ve used the idea on many of my larger power designs. While many people seem to disagree with me, I personally think it idiotic not to have sail backup on a cruising powerboat. It will slow the roll, save fuel, and even get you to shore in a pinch…. The “normal”version (at the top of the page) also has sails, by the way! Of course to work, you need a low profile. A two story superstructure is a sail in its own right and there’s not much point trying to put a sailing rig on it…. 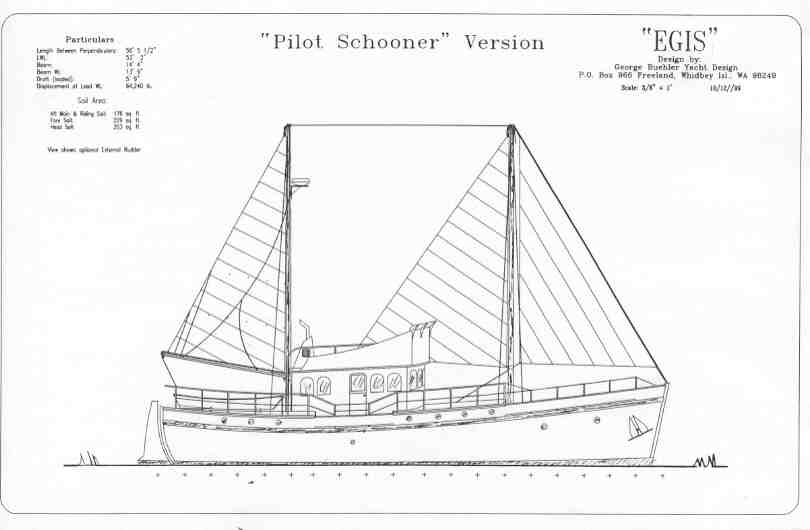 Here’s the pilot schooner rig that fits on the drawing at the top of this page. This is my personal choice even though I know the junk idea makes a lot of sense. Wait. I’dTRY the junk first. Did you know up in B.C. them Canooks make junk sails from blue plastic tarps (the Flag of Whidbey Island) and sail to Mexico and back!

This design is one of my very favorites. It’s long enough where you can have an extremely comfortable interior and at the same time have an unusually trim and “slippery”hull. Her D/L is only 167, but she’s still a hefty boat, solidly welded up from 1/4″ and 5/16” plate.

Back in 1980 I spent a few months in Iceland, then went on and poked around some of the Norwegian fjords as well as I could by car. I’ve always wanted to go back by boat, and I think this is the boat I’d like to do it in. she’s easily driven, very livable, should be seaworthy as hell, and best of all she looks “right”.

Originally, the engine shown was to be a 4-71 Jimmy which is far more power than normally needed. However, as I worked up this design I kept thinking about high latitude cruising, pushing against currents, making frequent short hops where I’d want to go close to hull speed so I could get into the next harbor before dark(entering a strange place at night is the single most dangerous thing you can do when cruising), and that rebuilt 4-71s are so inexpensive and easy to find, so I drew one in. But, that is a big damned engine, taking up a lot of space, so I drew in a 6 cyl. Lugger. It’s about the same size as the other tractor type engines out there, so any one of them would fit.

As you’ve read in my literature, I think you’re better off getting an engine that will run efficiently at your NORMAL cruising needs even if it does occasionally get bogged down in the rare case where you’re trying to buck strong weather because you’re hardly ever going to buck heavy weather. It’s to uncomfortable.Perhaps a 3-71 would be the better “cost efficient”choice for all around use, now that I think about it. It’s rated to produce a continuous 82 HP so would be happy running at half or less that, and is the least expensive option, which doesn’t hurt!

But speaking of engines…. The above was written a couple years ago when I wrote out the spiel about this design for The TrollerYacht Book. I still agree with the above engine stuff, but TODAY,I am absolutely crazy about the 180 (max) HP Cumins diesel in my Dodge pickup which I finally understood how lovely it is. Sometimes it takes a club, you know? I’ve always liked it, but nowadaysI am crazy about it! It runs at a fast idle for day after day, sipping fuel, not using any oil. It has 270,000 miles on it, starts immediately, and is totally dependable. As a matter of fact, this paragraph was originally written Feb. 2001 at 6 AM, 1100 miles from home, parked on a hill overlooking Monterey Bay, at the dinette of my pickup camper. Teddy my doggie is passed out on the floor and Gail is passed out in the queen bed (fitting for a Princess). In an hour or so I’ll roust them, cook breakfast, then fire up the wonderful Cumins and head North towards home. Yes, the Cumins6 banger is an incredible engine, and is used from everything from boats to pickups and even dump trucks. I’m pretty sure if I was to build a boat this size I’d use it. 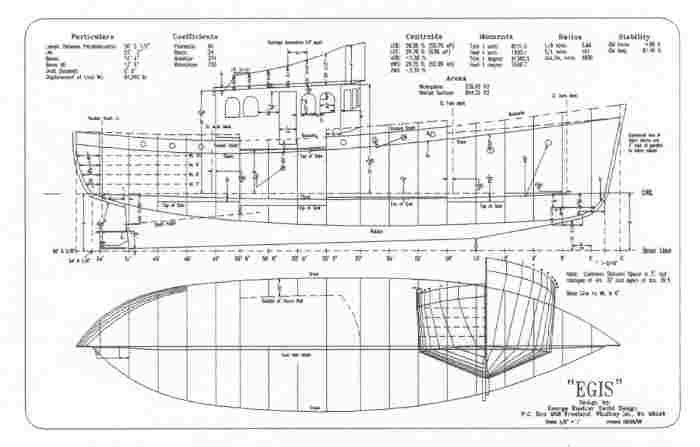 Her lines have been changed a bit from the version in the Troller Book. She now has a longer wheelhouse, and a raised sheer rather than the low deckhouse. I think I like the version in the book better, but this version has more living space and looks fine, as the 3-D colored in view below shows! 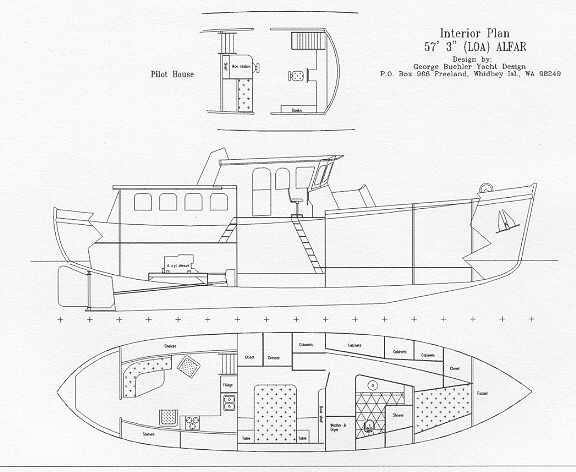 Here’s a “sedan” version I’m playing with. I think that “Portagee Bridge” thing is silly; I’d loose that. But otherwise, this idea seems like it would make a fine coastal cruiser and liveaboard. 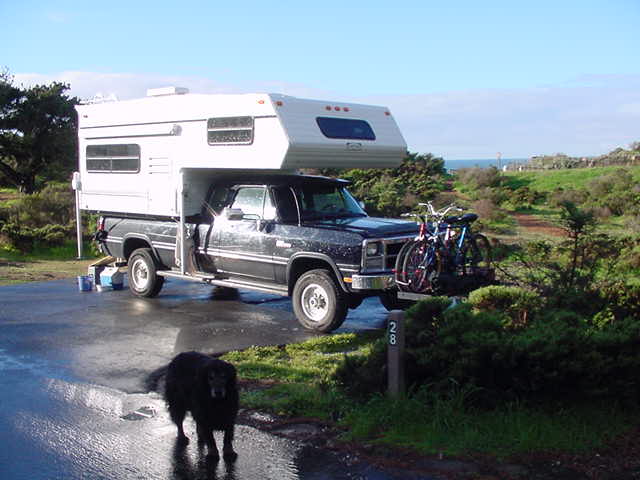 Here we are down at Monterey Bay in the old Dodge. What’s this got to do with EGIS? Well, nothing!

A “cutting disk” was made for this ship. Here’s a view that program made, showing the bow thruster.