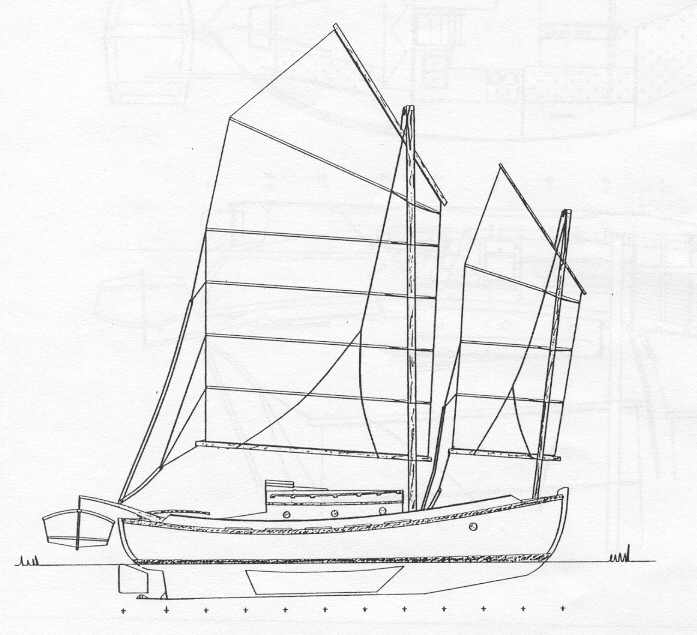 She’s sort of a Maine Peapod on Steroids……

The best thing about the boat design business is the people I get to meet. While most dealings are through the mail, occasionally I get to meet the person “live,” and often this ends up being a lot of fun.

Rosalind Hildred is such a person. We corresponded for months, and then she decided she wanted me to design her new boat. Even though she is most definitely NOT a male, in the interests of being Politically Correct, I’ll try to describe her as though she wasn’t a drop dead gorgeous female.

Among Rosalind’s family includes a former governor of Malta, and as a result she is very much that wonderful traditional first generation west coast Canadian that is so British because of their upbringing, but being born and raised in North America, they are tempered enough to be bearable (just teasing, you know. God knows the Brits have their fun at Yanks). She’s quite fit, blond, and lives on an Island in B.C. in a waterfront house she built herself. She has a small boatbuilding facility and mill, and saws her own lumber from the wealth of logs still to be found up there. She has two strapping sons and a boyfriend on another Island who flies in by seaplane.

Rosalind arrived at my office in a 1960 powder blue Morris Minor, bearing a half gallon of duty free whiskey she got at the border. I can’t imagine traveling in a 35 year old Brit car, but then I’m not British. In my travels I’ve discovered that the Brits, more so even than the Krauts, are capable of endurance and “keeping your _____ up” (as they say) in situations where I’d likely just sit down and rest. Of course since this car is not only a Morris but is 35 years old too, it does require a bit of work every now and then, but people who travel in such things just say that’s to be expected and they cheerfully keep fixing it. Before Rosalind could leave here, the Morris required a bit of water pump attention, and seeing her flat on her back below the Morris, swinging her wrenches, was a sight I’ll never forget and my wife STILL teases me about….

Anyway, to the boat. The goal was a seaworthy sailing boat, easily handled, but capable of living on a mooring that goes dry every tide. That last part was the problem. Centerboards are a real hassle because they can plug up with mud when the boat grounds.I’ve always thought leeboards had a lot going for them, but Rosalind wanted bilge keels so that’s what we drew in. Although popular in Europe, bilge keels have never been particularly accepted herein the US. I think if they’re built heavy enough where they can take the abuse they are bound to get they make sense. We solved the potential structural problems (I hope!) by making them rather shallow, and long. Rather than go for “optimum” current ideas of keel water flow shape, I drew them out as long fins laminated in place from 5 1/2″ wide stock, tapered to 3″ wide at the outer ends, heavily through bolted into a solid stringer behind the frames. I think they can bang away on an exposed beach for a while. To further help them stand up to abuse, the main keel of the boat is just a bit deeper than the bilge keels so it will take the main weight of the boat when it grounds. While it’s never any fun to actually TEST your theories of sufficient structural integrity, building in a way that LOOKS heavy enough seems to work for me. I’ve been lucky enough not to have structural failures, so far….

Rosalind knew exactly what she wanted, and in the two days she was here we went through a variety of lines and hull forms until she was happy. She kept my nose to it, refusing to pay attention to my attempts at making it my vision. This of course is what makes a successful custom design; it’s what the customer wanted, not what the designer steered the client to.As usual, the computer really helped here. After we got the basic look we wanted, we then loaded the work on a second computer and ran the two side by side, making small changes in each and comparing back and forth. As untraditional as CAD may feel to some people, the power it gives to editing is what makes me stay with it. Nobody drawing by hand could make the many versions of a lines plan I routinely do before deciding on a “finished” version. It wouldn’t be possible! There’s no question that CAD hull programs have totally revolutionized the design process.

The hull we ended up with is quite beamy and rather shallow. Although it is a rather simple round bilge hull and doesn’t have reverse curve anywhere, it still has a very attractive rather “high shouldered” sectional shape. Rosalind wanted the slight tumble home in the midsection area. This is rather unusual, but it looks good. The sections flow smoothly and would be easy to cold mold diagonal layers to if you don’t care for traditional planking. It’s very voluminous for its length and should be quite stable. It’s not a hull form that will like to point well into the short choppy waters often found around the Canadian Gulf Islands, but it has an 16 HP Sabb diesel for that. Besides, Rosalind wanted to use the two masted Junk rig which is not known for pointing. It’s interesting that the Junk rig is quite common up in B.C. The rig makes sense because it is so low tech. The full batten low aspect rig has hardly any strain on the sail and the flat shape is easy to make yourself. One Canadian told me he made his sails from a blue plastic tarp, and they held up to a trip down the coast to Mexico and back. Total cost was around 100 dollars…. 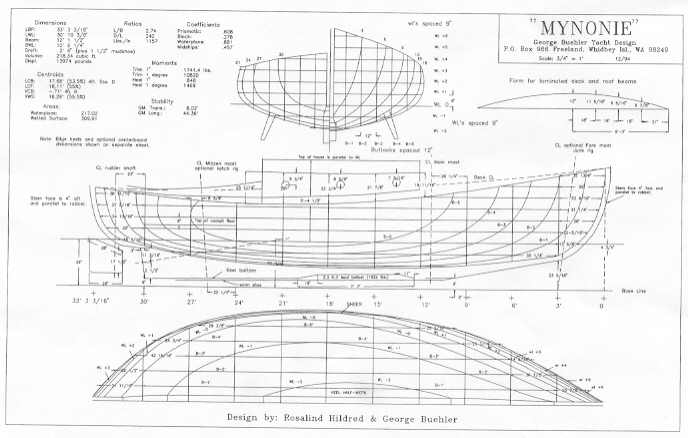 The construction of the boat is wood. Rosalind saws her own logs and it was a whole new experience for me to specify materials that were NOT based on off the shelf lumber dimensions. What freedom! This was the first time I could totally disregard “waste” and I had the time of my life speccing out things like “1-3/8″x 2-1/4″ or 1-7/8″ x 2-3/4″, just like the Old Boys used to do before wood became an exotic and rare material. Builders without access to their own old growth logs can modify the dimensions to the closest available dimension, or of course the boat could be completely cold molded up in the latest fashion.

However, Rosalind is using pure old time traditional wood construction with the exception of the deck and house roof beams, and the frames between the main frames. These are laminated. Construction is stout. The main frames are double sawn of two layers of 1-3/8″making a finished frame of 2 3/4″x 2 1/2”. Planking is 2″ red cedar, and there is a 1/2″ red cedar ceiling.Decks are planked from 1 1/2″ x 2 1/2″ red cedar. The keel is sawn from full 12″ wide logs. All fastenings are silicon bronze and there is a tremendous hand forged bronze stem iron that my friend Smitty found on a remote Alaskan Island and gave to me. It looked made just for this boat and will fit on with hardly any forging and, contrary to my nature, I seem to remember I gave it to her. 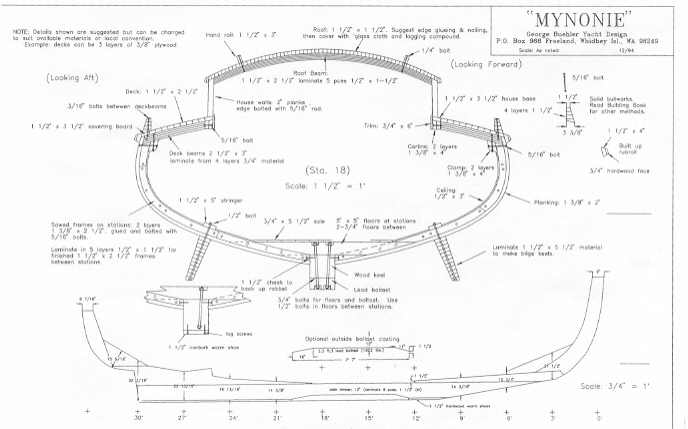 Rosalind wanted just 5′ 9″ headroom which is enough for her. I suggested raising the house a few inches, but I suppose taller people will bump their heads once and then learn. The CanadianIslands are some of the best summer cruising in the world, and this boat’s interior will be very comfortable for extended trips.It has a large galley, a comfortable double bunk, and lots of storage. It’s not a very “clever” interior because the emphasis is on elbow room for two.

Certainly there’s room to make a more normal interior, but what do you give up? If the boat normally just has one or two people aboard it makes more sense to have an interior comfortable for them, rather than giving up something to make bunks for occasional guests. 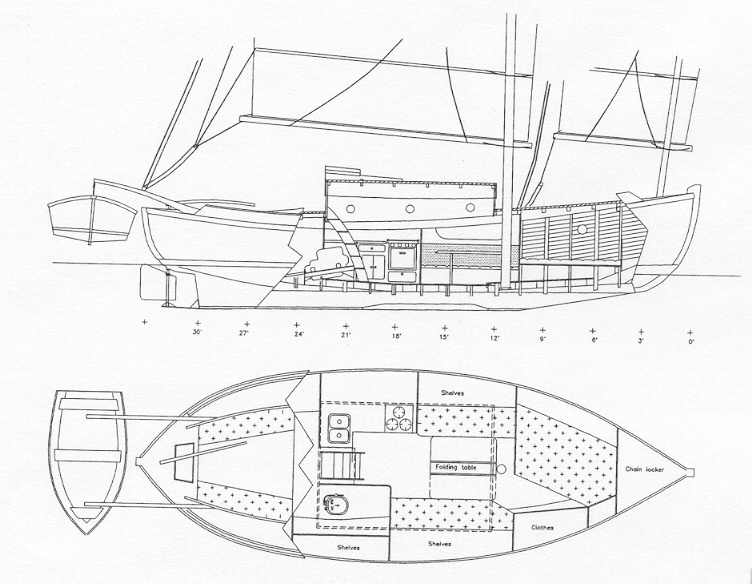 The boat’s name, “MYNONIE”, is for Rosalind’s British mother. I haven’t met her but she sounds as though her influence has much to do with her daughter’s gutsiness. For example, a few years before we worked on this design the two of them hitch hiked from Canada to Mexico and back!

I lost touch with Ros for probably 10 years then out of the blue (Jan 06) got an email from her. Unfortunately because of a variety of personal issues the boat was never finished, and, she’s living in Belize now. Oh well, that’s the way things go but the most important thing of course is that she’s still going strong!