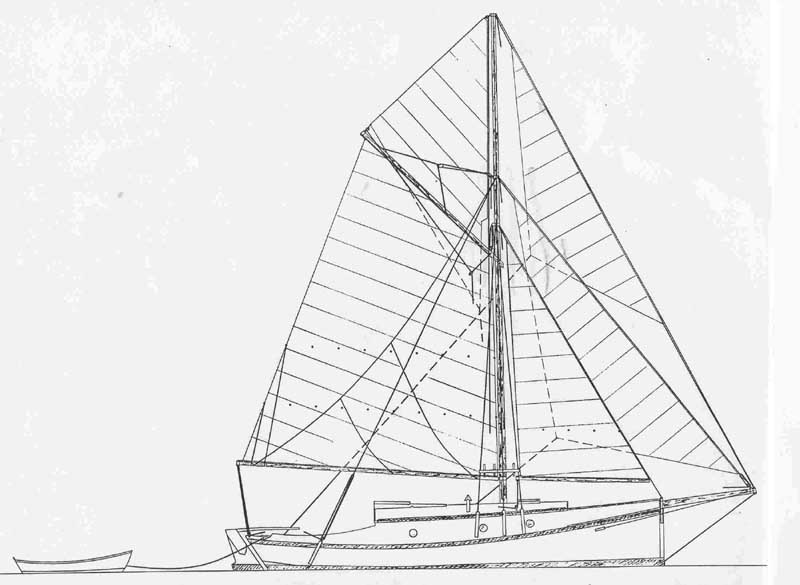 I like this profile a lot; it has a very, very jaunty “attitude” to it. Personally I might go for a normal deckhouse rather than the raised sheer shown here but, this version sure gives a spacious interior.

There’s only about 300 full time yacht designers in the world, and of them, a very few actually make any real money at it. I wish I could say I was one of those lucky few, but I’m not. But where I am luckier than most is that I have established, for better or worse, some sort of a reputation that frequently attracts interesting people.

Don’t get me wrong. I like money. After all, I AM an American! But America, if you understand how it works, is a very easy country to live in. Don’t believe everything you hear on the news! Many of our cities have sections you don’t go near without a machine gun, but the rest of the country is pretty easy going. I live on an Island close to Seattle but 50 years away in time, on a 100m x 100m plot of forested land in a little house Gail and I built, private enough where I can stand on my porch stark naked, howl at the moon, and shoot a shotgun at the stars.

Anyway, Helmet Oswald lives in Munich, and one day he mailed me a photo of a model he had built, asking me if I would help him turn it into a design for a real boat. I don’t know where he found my name and address, but I’ve had many good times in Germany and I’m always happy to work with a German citizen because it makes me feel I’m partially paying back all the people there who were nice to me when I was there. Soon, my mailbox was overflowing with beautifully drafted profiles and interiors and sailplan ideas. Helmut’s drafting is so good that I assumed his drawings were computer drawn, and I was surprised to learn that he had actually hand drawn in ink everything he sent me. Oh, but I wish my German mother and second generation German father had beat a bit of their national compulsive behavior into me because the easiness of living as I do has corrupted me. I took the time to learn computer drafting because I saw that’s where the future was going, but ALSO because I never was a very good hand draftsman. Rather than force myself to master it, I decided to learn CAD instead, and when I need to feel in touch with history I carve out a softwood half model. But hand drawing? These days I hardly ever even touch a pencil….

Helmut’s wonderful drawings of his dream were a great start. I scaled off the basic dimensions of his above water profile and the deck view, and entered them into a hull design program I use called AutoShip. That allowed me to fine tune everything, add an underbody shape that was buildable in plywood or steel, figure up all the information like displacement, wetted surface, and so on, and to create a Table of Offsets with dimensions as close as 1mm. The completed hull lines were then “transported” into AutoCad, a drafting program, and the rest of the plans were finished. Helmut participated fully in the evolution of the design, and the result is a very successful custom design because it is exactly what the client wanted. 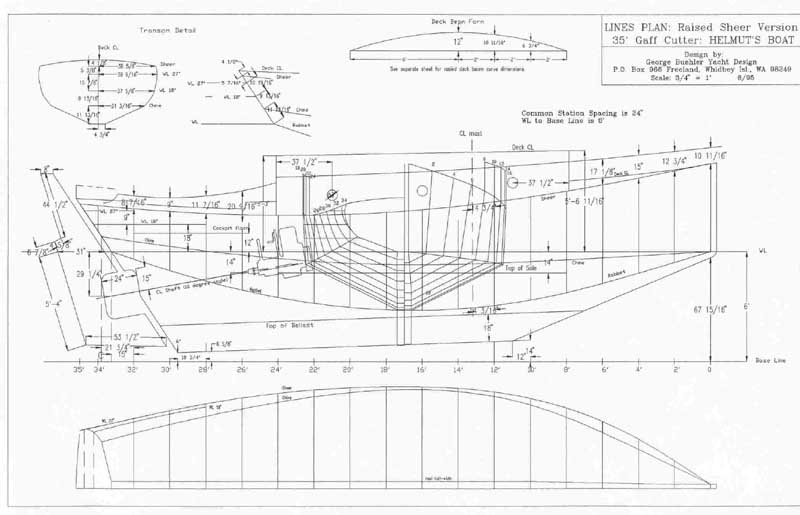 Her very simple lines make plywood and metal easy to form to her.

I think this boat has a very “friendly” look to it. It makes me think of a drawing from a children’s story book, something like the boat in “Scuppers, the Sailor Dog” which was a children’s book I had many years ago. Helmut says it is cute as a button, so named it “BUTTON.” “Cute as a Button” is a very old English expression, not heard at all anymore. I wonder if it’s still common in German? That’s a friendly name, but I think it looses something inthe translation to English. Some years ago in Brazil I sailed on a boat named “Piolio.” In Portuguese that means “Little Thing,” but it translates in English to: “Louse,” or Bed Bug…. BUTTON isn’t that sort of thing, of course! But I wish I spoke German so I could fully understand the name. Of course perhaps Helmut meant it as it sounds, BUTTON. I must ask him if he was thinking in English or German, because as with most Germans, his English is very good.
The boat we ended up with is a very traditional 10.7m gaff cutter. It has a single chine hull and is heavily built of plywood. She has a roomy hull, and when floating on her waterline she will weigh in at 13,022 kilo. That’s considerably heavier than most new boats her size, but I like heavy boats. They are quiet inside, and they don’t bounce around much. Once I was sailing alone down the California coast. It was dark, raining, and quite choppy, and I was new to ocean sailing and getting more frightened by the moment. Finally, I went into the cabin, lighted up the kerosene lamps, put a quiet tape on the cassette player, then went back out to the cockpit. For the rest of that night, wheneverI started getting frightened or tense all I needed to do was slide the hatch open and look inside my cabin. Everything was so peaceful and quiet down there, the curtains and the lamps on their gimbaled holders swaying as the boat rolled, that it would calm me right down (for another 10 minutes). By the way. Within a few monthsI had sufficiently conquered any compulsive needs to “sail on regardless” in my nature to heave-to and drift so I could sleep all night in my bunk, rather than sit out all night in a bouncing cockpit in the rain getting scared. One of the hard things to learn when cruising is that there is NO rush. Once you get somewhere, anchor, and take a look around, there’s not much to do except lay about and drink so who cares when you get there? It seems more important to have fun GETTING there, not to race there!

But forgive my tangents. “BUTTON” has a raised sheer style house which gives the maximum amount of interior space because there’s no side decks to get in the way. The raised sheer ends 2.45 m from the bow, giving the boat a “normal”forward deck. That break in the roof line makes the boat look more interesting, allows you to place opening port lites in the front of the cabin for ventilation, and makes a nice place to sit. A normal deck house with side decks can be built it you prefer, and the Lines Plan shows both versions. She has a large cockpit with comfortable seating for four people, and steering is with a tiller although a wheel could certainly be fitted.
The interior will be very comfortable for a couple to spend extended time aboard, but will still sleep 5 because the dinette table converts to another double bunk. There is a large galley with a sink mounted close enough to the centerline so that it will drain when the boat heels. The “head” is very big, and has room for a shower and a counter with a wash basin. There’s all sorts of storage lockers and shelves giving plenty of room for carrying all the bits and pieces you like to have around you. 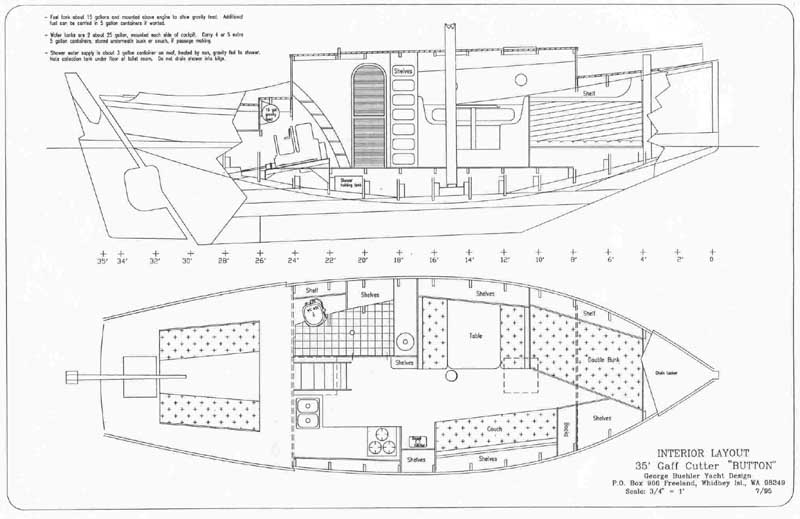 A comfortable cruising interior although I think I’d go for a CL bed in the bow rather than the offset one shown.

Construction is wood composite made from an inner layer of 3/4″ x 3″ planks, covered with two layers of 3/8″ plywood. The entire hull is then sheathed in glass cloth and painted with epoxy resin. This type of construction is very simple and inexpensive, and is well suited for amateur builders. The boat can also be built of conventional planks (1-1/2″) or steel of course. 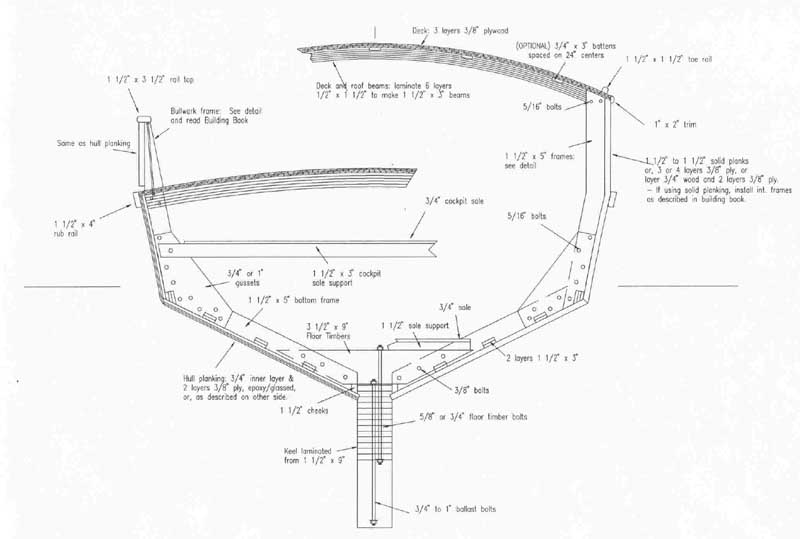 The original didn’t have the pilot house. However,I’ve got a lot of interest in an old OLD design of mine calledRUBY B., and I always thought this boat would be a better choice because she has more volume. So, now in Sept. 2001 a pilothouse version is sketched up, shown here.

Original power was a 10 HP Norwegian SABB diesel. They have huge flywheels, a compression release, and a crank to start them (12volt electric is available too). They are heavy and slow turning, can be cooled by seawater without hurting them, and are available with a variable pitch propeller instead of a normal transmission.But, they’ve become pretty expensive and after watching the 2 cyl. diesel in my “Ford” (who knows who made it) tractor run trouble free for 20 years now, I also like the more modern industrial engines and a 2 cyl. Yamar or similar is shown on the pilot house version. The SABB is shown on the non-pilothouse version.

The sailplan was fun to work up. This boat was always meant to be a thing for having fun with, so we chose a sailplan that would be fun to use. There are all sorts of lines and spars to play with. I specified a one piece “pole” mast rather than a mast with separate topmast, but a reefing topmast could certainly be used instead. If you are intimidated by the gaff main and topsail, a normal marconi sail can be used on the same mast. In that case, I’d suggest shortening the main boom, and fitting a standing back stay. 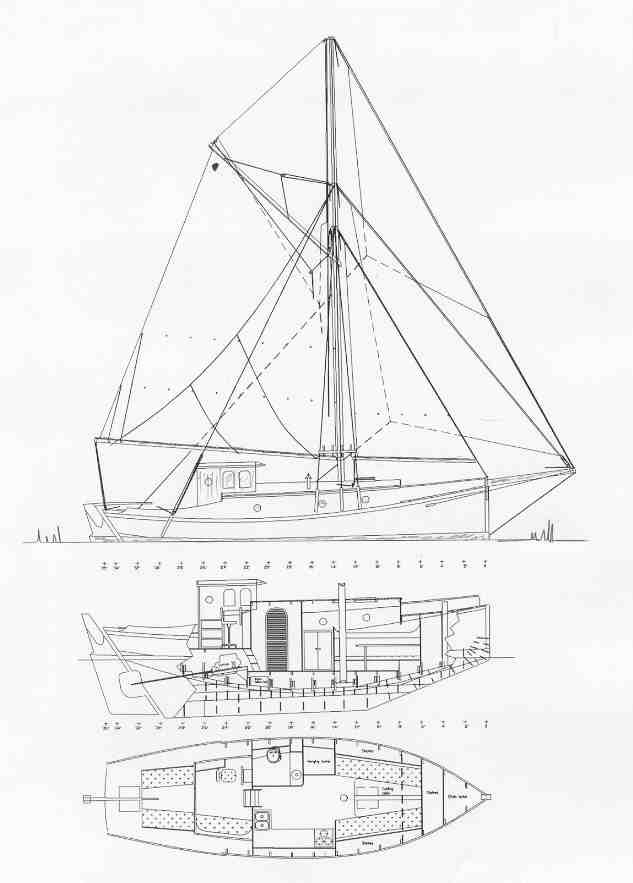