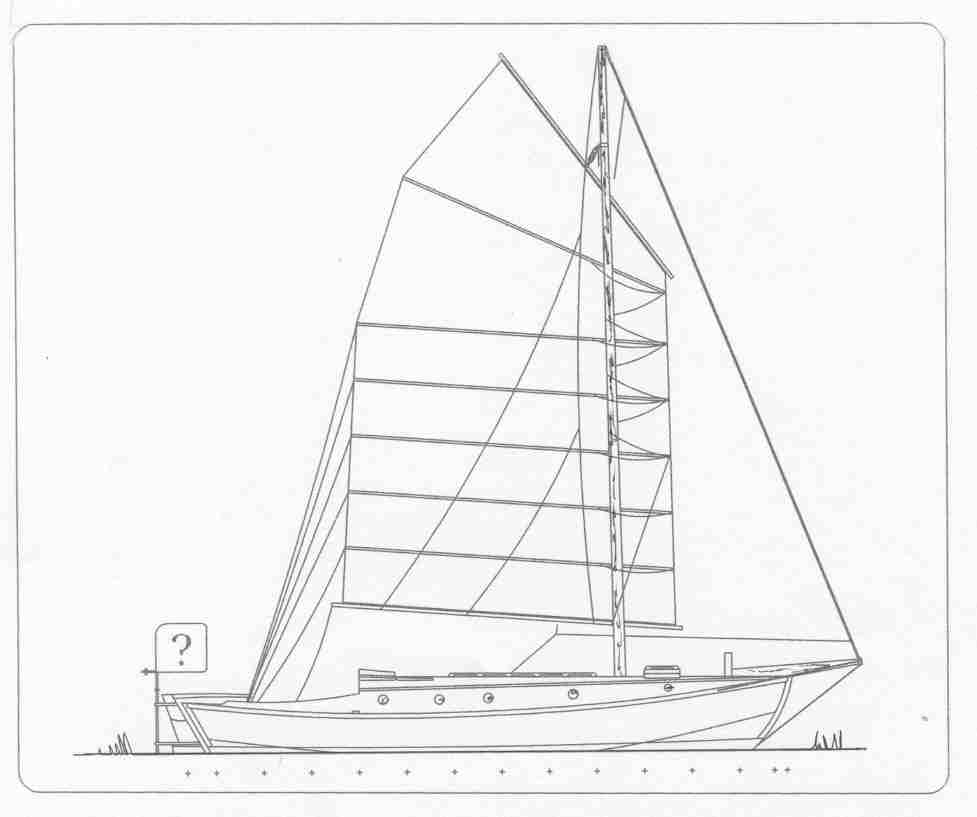 W. W. McGrahan, former instructor of Latin, set in his opinions as only a British gentleman can be, after years of careful thought and study, gave me a set of off-set she had worked up and asked me to design his boat from them.
We argued. I am set in my ways too, but I was no match for a determined Englishman who, after all, WAS paying for what he wanted.

The results of our labors is what I call “Dissolute,” which in Latin means following no rules. The owner prefers “Indolence,”although suggested that I might prefer “Recalcitrant.”

The hull is quite interesting. The unusual chine line and deep rabbet has given a hull form that has minimal wetted surface and displacement for this type boat, but when loaded or heeled, immediately picks up additional volume. While it will be initially tender, it will firm up rapidly, and has tremendous reserve stability.It achieves maximum stability at 80 degrees which is way over, and according to the computer is actually self-righting, discounting the resistance of the raised sheer and spar, to 134 degrees. That means on paper anyway, she would be self-righting to maybe 150degrees or more, meaning she’d roll right back on her feet just scaring you to death rather than drowning you…. 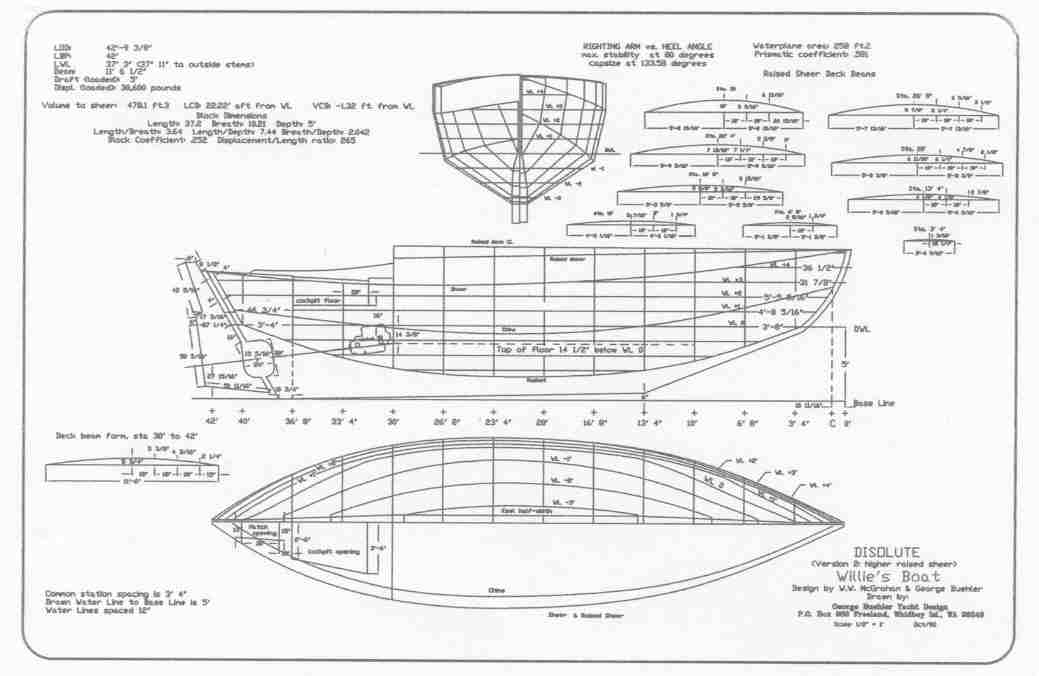 She’s simply and heavily built of steel. Her frames are 5/16″x 4″ x 1-1/2″ angle, deck beams are 5/16″ x 4″x 2″ tee section and plating is 3/16″ for hull and deck.This far exceeds the standards specified for off-shore racing rules and when coupled to the tremendously buoyant hull form should make her pretty safe. I made a “plate plan” for her too! Personally I would try it on cardboard first, but I think this is what the plates if expanded out would look like. Yes, we have the dimensions!

The interior will comfortably house 4 and can sleep 7. There’s a real galley and an adult size “head”,good engine access, and plenty of storage room. 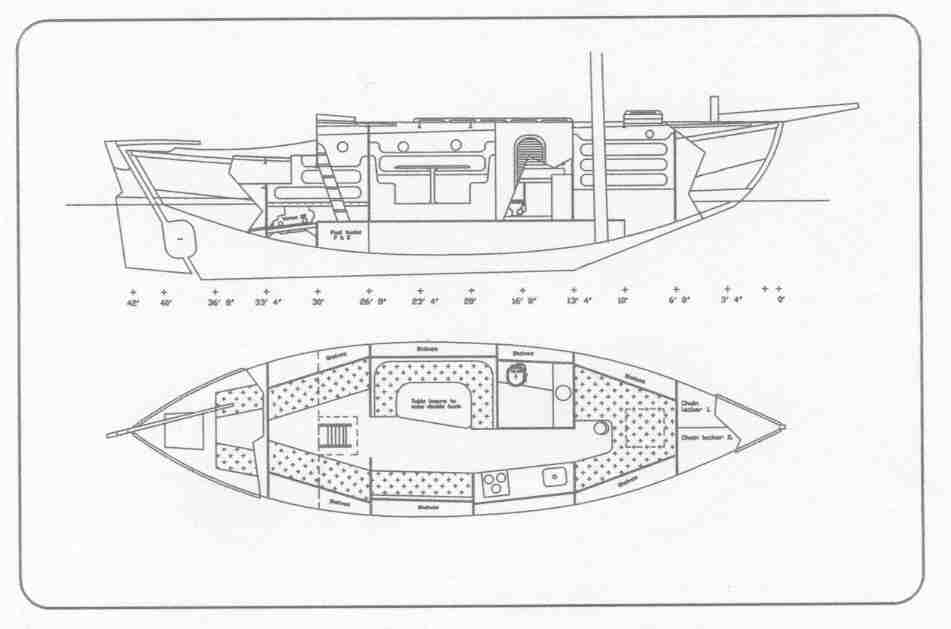 The “Junk” rig is unusual. The Asians were using it back when Europeans were still living in trees. While many of the traditional hulls the rig was used on were to high, wide, and shallow, to be very seaworthy, in modern times, Col. Hassler and several other designers, have used the rig on seaworthy hulls and speak highly of it. They claim it is very versatile, easily reefed, as efficient pointing as a marconi sail of the same luff length, and unexcelled off the wind. Maybe so. Somebody told meTom Colvin’s new boat is NOT junk rigged and that says something since he always used it. I’ve read that one fault the rig has is that it can be hard to tack in very light breezes, and in areal storm can’t be reduced quite as far down as is sometimes wanted. So, I added the bowsprit with a reefable furling genoa.The idea is in light wind sailing this genoa will both help point and tack when pointing, and in very bad weather, the junk sail can be lowered completely and the boat sailed with the rolled in headsail. While I’ve not seen this done with junk rigs before, the theory seems plausible so we’ll see how it works. July 08I got the following letter from Alex Burton, a Canadian who has sailed a junk rigged boat a up and down the coasts. Here’s what he says…..

Just in passing, I read through your notes on the junk rig and can confirm some of the things you suppose.In very light breezes they do, sometimes, have some issues with tacking. Some of this problem is the result of people trying to force the boat around rather than sailing it. Patience and finesse are both wonderful virtues. Backing the sail, however, soon solves the problem and this is very easy to do. As far as heaving to, my boat was “yawl” riggedI suppose you would call it a cat yawl with a little junk jigger right aft. She would heave to beautifully and I rode out a few gale force storms that way lying in my bunk below reading a book. Very relaxing. There is some issue with shortening sail sufficiently when running in brisk winds, but I did use a small jib set flying and that worked very well. I was caught in the ongoing 3 day gale off Cape Mendocino during which a 60′ steel fishboat lost all the windows in her wheelhouse and a big, strong, aluminum sailing boat with a strong crew of macho men came limping in all battered and complaining.I used the small jib, went below and read, peaking out from time to time to marvel at the huge waves.

You are certainly welcome to the junk rig comments if they are of any use to you. After sailing Pookmis thousands of miles with that rig, mostly without an engine, Idid develop some familiarity with the rig and an appreciation of both its qualities and weaknesses. For cost and simplicity, it is pretty impossible to beat. The sail, as you may remember, was made from a blue, plastic tarp sewn up in an afternoon on a treadle Singer. The mast was a fir pole planed to the heartwood and the battens were simply saplings from dry, rocky south-facing ledgestight grain and fairly straight. The lack of rigging allows the sail to be feathered and it can be reefed in a heartbeat on any point of sailing. The lazy jacks also allow the sail to be reefed from the bottom up to provide reduced sail and better visibility when, for example, maneuvering in tight quarters. It’s not the greatest on a windabout equivalent to a gaff rigbut is a delight on anything of a reach or a run. Downwind, of course, without stays in the way the sail can be set almost like a square sail and easing off on the lines that control fore and aft tension the centre of pressure can be shifted more toward the longitudinal axis of the boat thus reducing the lever arm and the ensuing weather helm. You can pull off a full jibe without touching a sheet with no drama at all because the sail is balanced. For short handed, old-man type cruising, it’s a pretty hard rig to beat. At no time, except perhaps when a big power boat passes very close at high speed, does the rig seem to impose any strain on the hull and no winches or other fancy gear are used at all. It’s always a big surprise to people when you sail up to a dock and drop the sail with one hand by un-cleating one line. 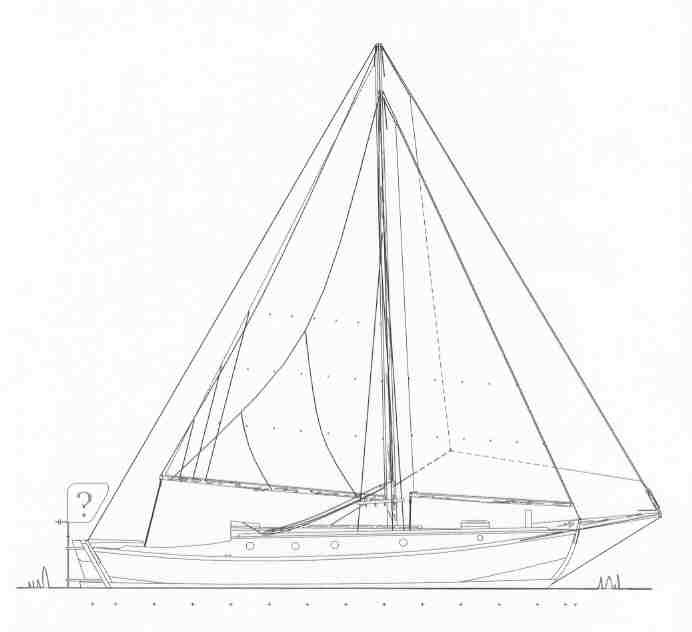 This “normal” cutter rig was added to her in 2008. I’d likely whimp out and use it if it were me. By the way, I never heard if she was built so have no idea how she worked out…..