Who ever heard of a long-range cruising powerboat within financial range of a burger flipper? Well, why not? It’s about the only entry level job our economy is creating any more.

Pilgrim is designed for single handing or for a very friendly couple, and will be extremely simple, fast, and cheap to build;I don’t see 15,000 1998 dollars in her including the new 20-horse Lister diesel, or more than six months building time.She’s built of plywood and lumberyard stuff. and is a very simple building project; well suited for a first timer’s project.

His interior is set up to be comfortable for a couple. It has a good double bed, a real galley, a head big enough to actually turn around in, and a dinette table that could convert to a guest bunk.

Two versions are shown; an enclosed wheelhouse version and an open cockpit version with speedboat style folding canvas top.I’d pick the open cockpit version if I wanted to do actual passages. It’s lower, has less windage, and is less likely to get damaged. The pilot house version would be fine for coasting or for vacation use. Both versions have watertight soles that drain overboard, just in case!

As small as she is, Pilgrim’s still a real cruising boat and so needs to carry a decent skiff. The back third is flush decked to carry the skiff, with the large space below available for storage.

This is kind of a weird little boat, but she should be lots of fun for very little money. Her light displacement and minimal room means she only carries 200 gallons of diesel, but that still gives her a pretty good range. And there’s a backup sailplan, so you’ll never get stuck. While Pilgrim certainly has the ability to cross oceans, I think I’d use it for coasting instead; I’d be a bit uncomfortable heading off soundings in something this light. If I wanted to cruise like that I’d almost certainly go for a heavier boat like the 38-foot Duck.Of course I’m saying this from the perspective of a fat and complacent middle-age guy with nothing to prove, but I remember when I was younger and unencumbered, and I had the time of my life in a sailboat that was 18 feet shorter, weighed less, and had accommodations even more Spartan than this boat. And I’ll never forget those two years, either, let me tell you. So if you’re a young punk doing some menial and boring job that you’d like to ditch and go cruising but you don’t have any money, or if you’re an old guy going through some sort of mid-life crisis and don’t have the time or energy (or, of course, money) to build a more substantial craft, or even if you’re just a normal middle-class guy, maybe even a Captain of Industry, and just want a basic boat for a vacation retreat and no-hassle coastal cruising, Pilgrim will do it for you.

Plans include a shallow version with an outboard well, suitable for “stitch & glue.” This would make her even simpler as well as easy to trailer (you’d still need an over-width permit).

Here’s my favorite version; the open cockpit. The interior I drew is the same regardless if you use the pilothouse or not. 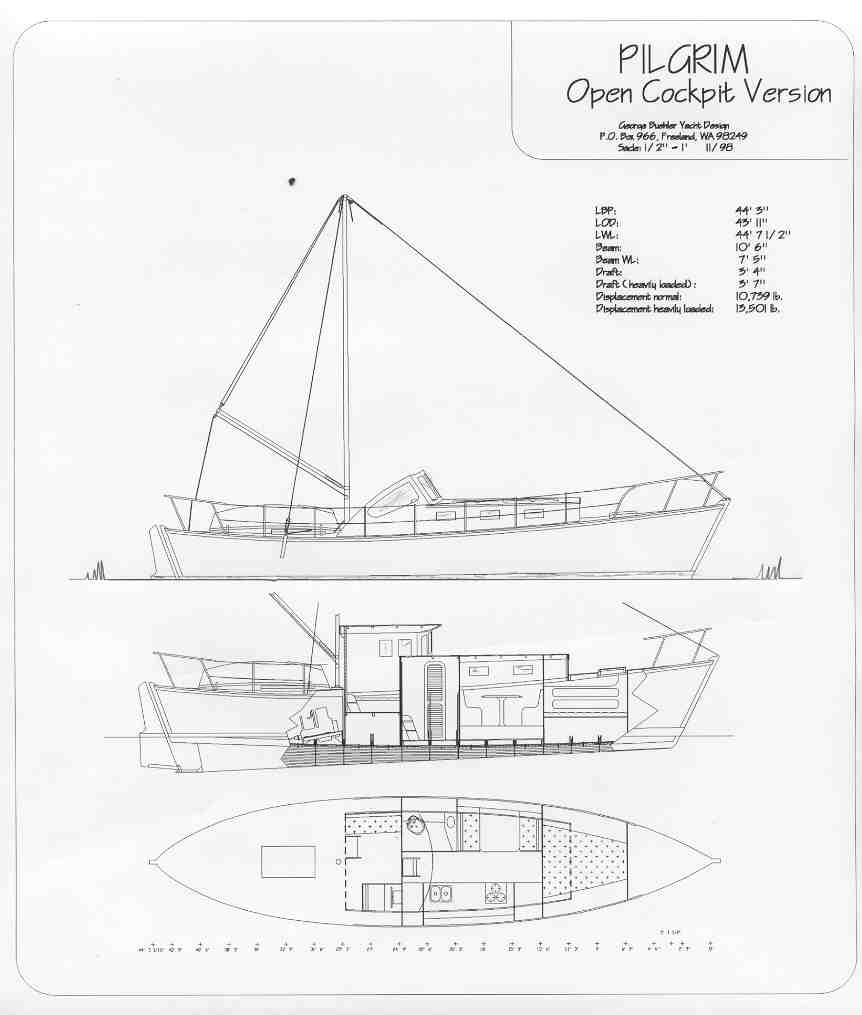 Here she is with the pilot house. It looks OK but I still like the open cockpit with a folding canvas top. 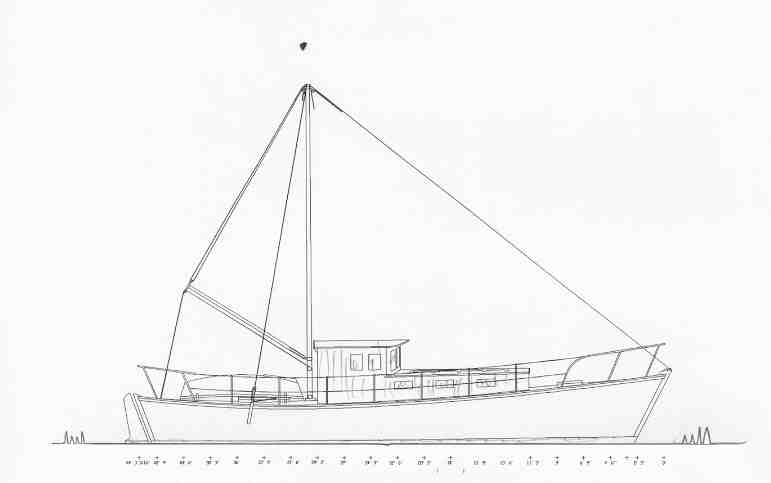 Here’s a few construction details. As I mentioned earlier, I want to do a version without the big keel, using a 4 stroke outboard in a well. Seems the simplest. Of course, for “real” cruising the inboard diesel is the way togo…. 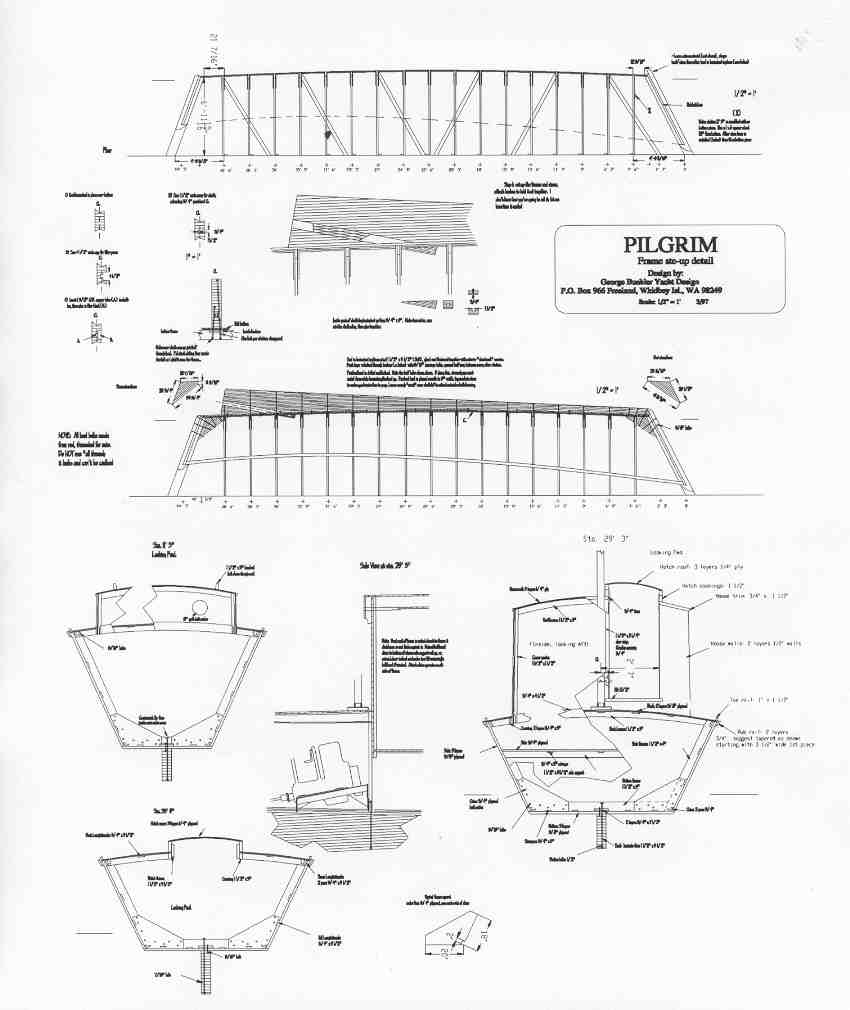 I finally got around to drawing this new version using a 25 HP “High Thrust” outboard in a well. Note this version also shows a large cockpit, and she lost that deep keel. I think this version would be a great vacation boat; the 4 stroke outboard burns hardly any gas, the shallow draft would be appreciated, and the big cockpit, which is above the WL so can be self draining by the way, would be very comfortable. 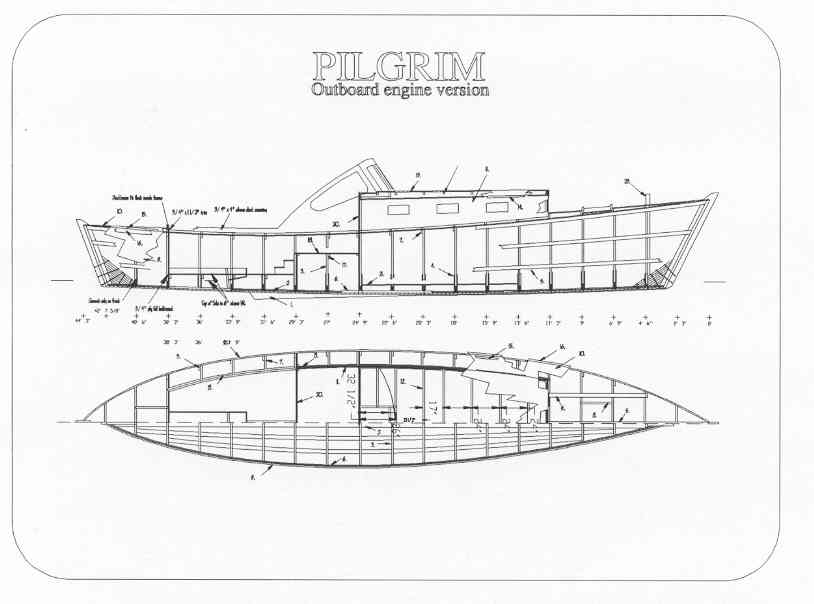 On to Construction Photos