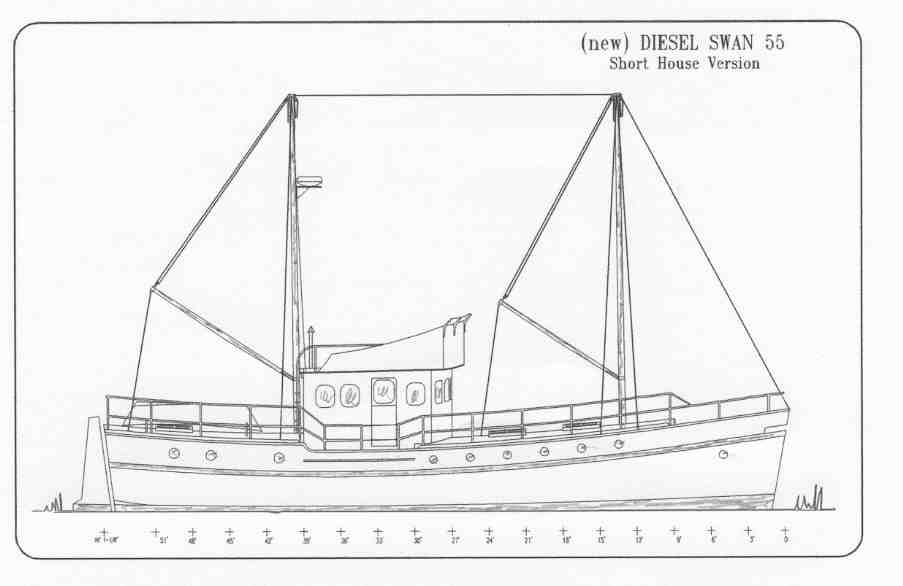 Her profile is obviously based on the 48 Evolution DUCK. An inboard rudder version will be available too. The fellow building this one wants the outboard one. It still has the “ladder” down to the water cut into the transom, but because of the outboard rudder, the swim step can only be on one side of the rudder.

This “bird” series of designs alls hare the idea of being about as simple and inexpensive to build as a rugged cruising boat can be. I’ve used a very simple hull form, long waterline, straight ends, that make assembly fast and smooth, and gives maximum “performance” for the overall length. The names are for fun; years back I saw an old troller named DIESEL DUCK and I always wanted to name a boat that.The name seemed perfect for the original 38′ of this series, and when other lengths were designed, well, I just used the name too because the concept was identical!

But over the years variations have come and to differentiate them, I’ve gone to other water birds. And this boat is so sleek while still maintaining the basic ideas of the concept that I couldn’t resist; DIESEL SWAN series is how these boats will be called. I have a similar series for sailboats, called the DRAGONFLY boats. Long, skinny, and low, they look great and provide comfortable living space for cruising. Just not as much space as a normal production boat their length!

The first of these Duck based skinny power yachts is this boat, the SWAN 55. She’s based on the 48 DUCK Evolution version.Outfitting costs will be essentially identical to the 48 footer.There’s just a bit more steel. I also drew in a larger engine but I don’t know if I’d actually use it….. Construction scantlings are identical to the 48′ DUCK. The plans are underdevelopment now (Oct. 2002) and I expect them done by December2002.

There’s an odd story with this design. I’ve been in this business for 27 years at this writing, and have only had a “problem” (that I know of anyway) with one client, and that was about the original version of this boat.

This fellow came to me full of enthusiasm. He was new to boats but said we was a wonderful welder. He liked the 48 Duck but wanted her stretched to 55. I made him the same deal I’ve done numerous times for people wanting a modification like this. I charged him an extra grand, gave him the plans for the 48 and the Lines & Offsets for the stretched 55. The deal was my normal one; when somebody actually buys the new design, I’d finish the plans and send him a set. Meanwhile, as the construction is identical to the base which in this case was the 48, he could start building.

I thought we were friends. Because he said he was such a great welder I told him I’d refer folks to him who wanted hulls built. I think I sent one guy to him. But this fellow backed out and I stopped sending referrals because the man in his enthusiasm forgot he’d never built a boat before. He was talking about big changes to the construction that I thought were a mistake. He was talking systems that sound interesting but were to me obvious maintenance problems.

I’m used to hearing enthusiasm; I like it. I’ve been around real pros much of my life. Guys who always catch fish, play instruments like angels, paint incredible pictures, tune racing engines, and certainly work metal or wood. I like seeing it but am not overly impressed because I know lots of guys/gals that are good at stuff! But some guys seem to think they know everything and that’s a mistake because the BEST at anything know the longer you deal with a thing the more you learn and I’ve found the very best are quite modest about their skills. Nobody is born knowing it all; even Jesus Christ had to be toilet trained you know, and few people ever learn it all. Anyway, I didn’t hear from him for I think a year. He stopped even answering my emails.

Suddenly out of the “blue” I get an email from him calling me a liar and a fraud and so on because I’d never completed the plan. I reminded him of the deal, and even offered to send him the 57′ EGIS plans for free. I think he was mad because the guy I had referred to him and backed out but I’m still not sure what his problem was. Anyway, no response to that soI forgot about it. Study plans were sold but never a building plan so I never drew it up completely. I wondered about it though because in other cases where people were building plans not completed they’d stay in touch and when they were ready for things like engine mounts or tanks, I’d draw them. I assumed he’d never started and still, even after the letter, assumed we were friends.

Then, about a year after that (spring 2002) I get another letter.This time I’m a liar and a fraud and now a crook too. He said he’d built the frame but then hired some NA to go over the Lines and was told the boat would float 22″ low at the stern! He was going to get me for mail fraud (?) and sic the CoastGuard on me. He wanted his money back.
This was very strange. First, I found it amazing that some NA would say that, especially without having the courtesy to write me and tell me what was going on. I also think he’s full of crap but that’s another issue. Anyway, I wrote him back, again reminded him of the deal, reminded him he never answered any of my emails, never asked me any advice, said I totally disagreed with his NA, and said if he really believed that the design was so terrible, then cut the damned thing up for scrap. I even altered my normal reclusive behavior and booked a display at the 2002 Metal Boat Show because I heard he and the NA were going to be there and wanted to hear them say this stuff to my face. They didn’t. Although I did see the guy outside the building and approached him, reminded him he’d never contacted me, and if he had questions I’m happy to work with him as that’s the deal. I’m afraid I’m a bit short tempered, and his response made me repeat that it sounds to me he should cut it up for scrap. Life’s too short….. I did learn from him though that the NA I had a very pleasant conversation with during the show was the same guy who had told the man that stuff. Funny but typical he didn’t have the cajones to say anything to me…..

Anyway, that’s the background. I’m only mentioning it because it still surprises me. But all things are for the best probably or so some folks claim. And today, the new Swan 55 is changed some to take in features we’ve worked into the EvolutionDucks. I still like the original but, since the man who originally wanted it has made it clear he doesn’t want it (to put it mildly), when the plans were finally sold I decided to redo her as this new person wanted. And as usual, as the plans have developed I’ve been unable to decide between two versions, so have drawn them both. The one posted here shows the short deckhouse of the 48 and has the below deck passageway between the fwd. and aft cabin. The other has a longer and lower house without the below decks passageway and will be posted soon. I like them both! 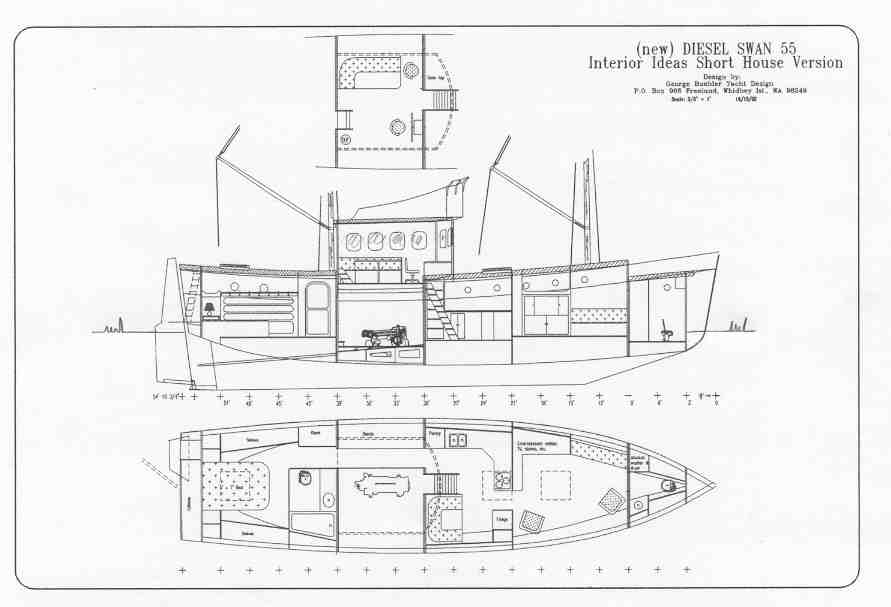 I’m really pleased with this interior a sit seems to me she’d be very comfortable for a couple to live in. From sta. 9′ to 21′ she is open “living room,” with two easy chairs, a couch, and a huge entertainment center. She has a small head in the bow that shares the space with a washer/dryer, and a real bathroom in the stern cabin. The galley has a very large counter with a good sized dinette table. There’s a second table in the pilot house. Note this version has the passageway beside the engine to link the fwd. & aft cabins. There’s room to put the galley there, as you’ll see done on the Seahorse DUCKS.It works well but in our case, my wife’s hobby is cooking and the kitchen is always “where the action is” at our home so I tend to like a galley to be in the main living area. I like this interior above a lot but it requires the house to be a little higher than otherwise to get headroom in the passageway. Of course that makes great visibility when driving! 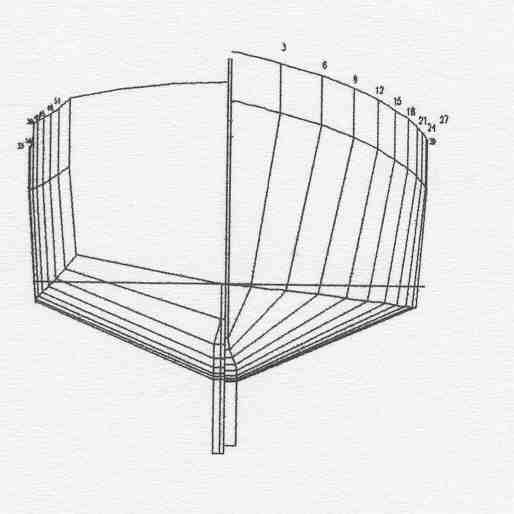 The Body Plan is based on the 48 Evolution Duck, with just a little “tweaking.” 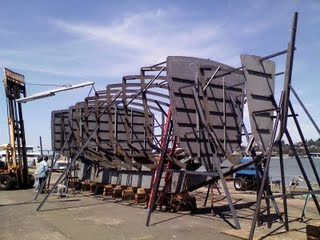 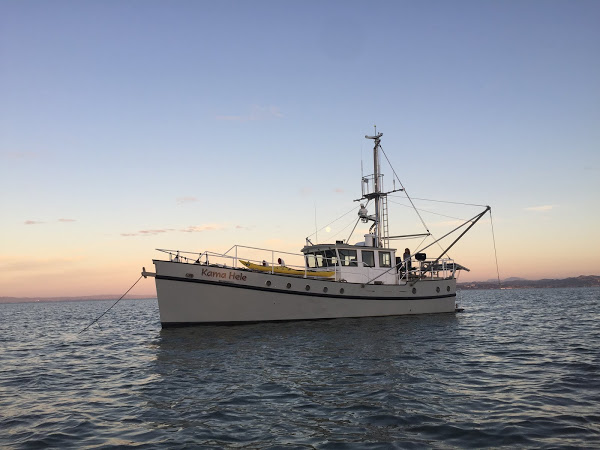