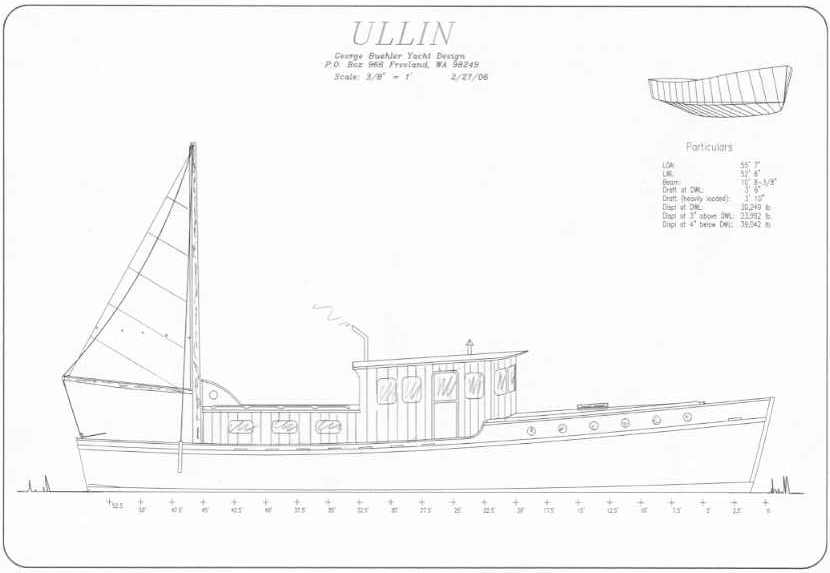 While working on Idelwild’s design I decided I liked her hull a lot and that she could be an inexpensive plywood (or wood) boat as well as the rugged polar explorer Ben wanted. So, I came up with a version using her very slippery and as we’ve also seen, very seaworthy hull that I liked better for the way I’d use her. I call this ship ULLIN after an old friend who I think would be very happy in a boat like this, wandering back and forth between here and Alaska. He always wanted to do that but like what happens with so many of us, “stuff” got in the way and it stopped happening. Nothing wrong with that of course. But have you noticed in our lives we come to a real “fork” in the path, and which one we choose really determines and sometimes radically changes, how your life will then go…… But this boat would be a good choice for that sort of a dream. She’s fuel efficient, comfortable, and able to take a blow OK. 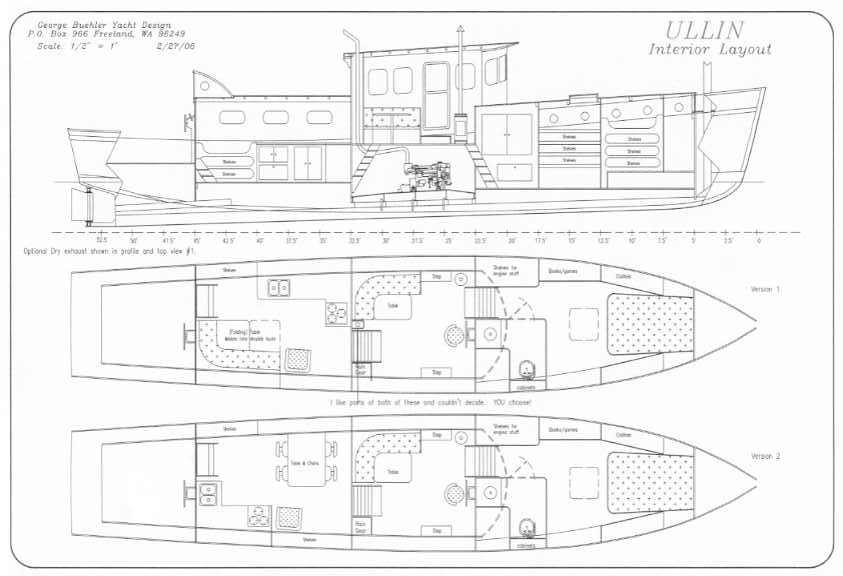 I think she’d be great for extended time aboard. Note the lower drawing shows a table and chairs; it wouldn’t convert to a bunk like the upper version shows, but might be nice. I like movable chairs! 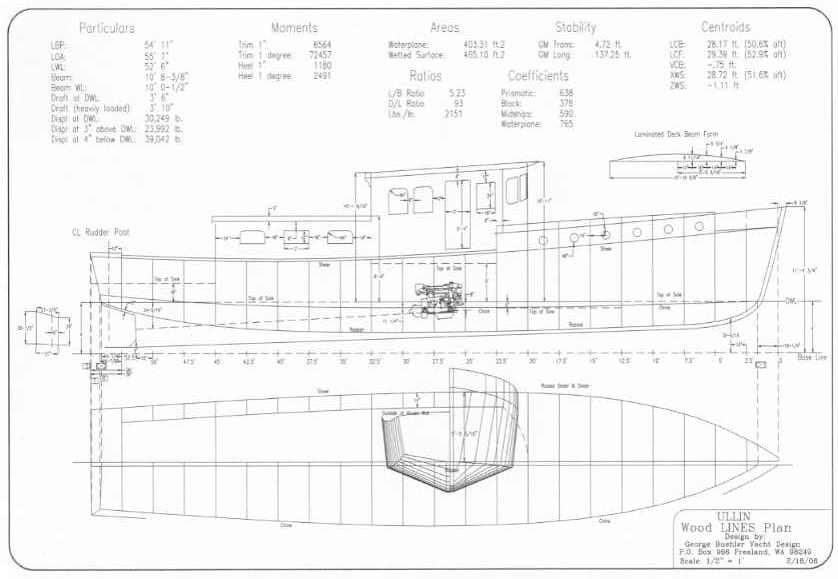 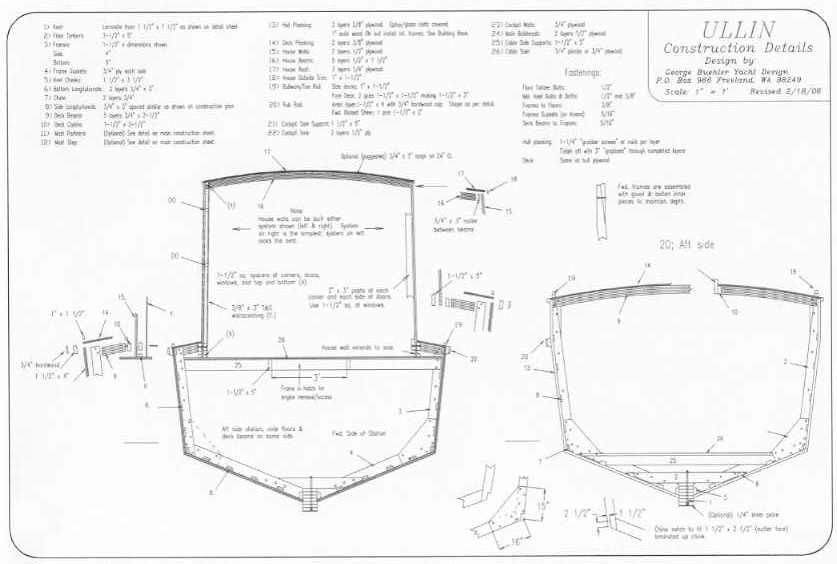 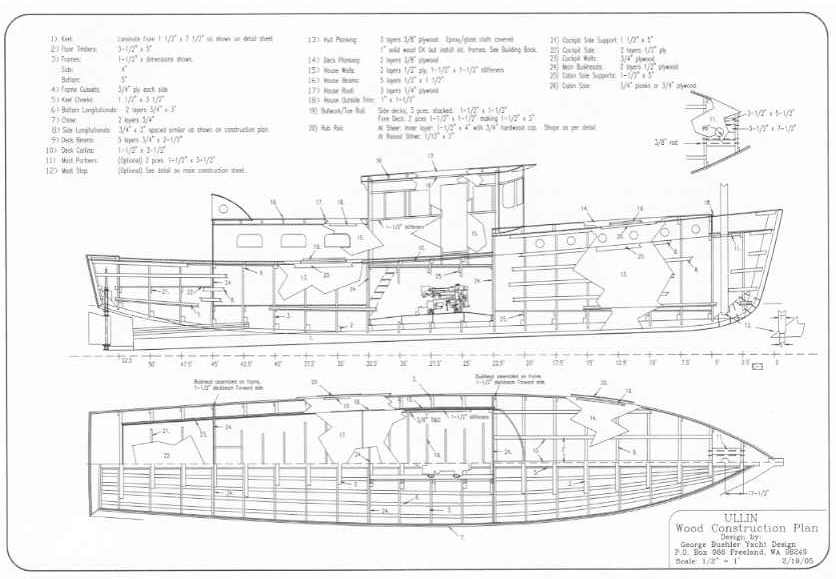 Her construction uses simple frames spaced 2′ 6″ and numerous longitutionals, then covered with two layers of plywood. Yes, she could be “stitch & glue.”NO, I won’t draw plans for her that way. I’m sorry, but I want a stout framework behind the ply.

The little mast in the stern is actually useful.Its small sail will hold the bow into the wind when drifting a”rip” fishing. The typical powerboat is blown downwind bow first, making sitting back in the cockpit with a rod uncomfortable. Stern first is better! The sail will also help hold the nose into it when anchored, stopping that wandering on the rode so many boats do. Note the cockpit controls; we need those for fishing and crabbing and stuff.

Finally, the Buback junk sail in the bow was placed just to provoke thought. Personally, I think it makes sense since it’s a very easily handled off wind sail, But I’m through arguing with folks about my rig ideas. Or much else, for that matter! I like it, and that’s all I’ll say about it! 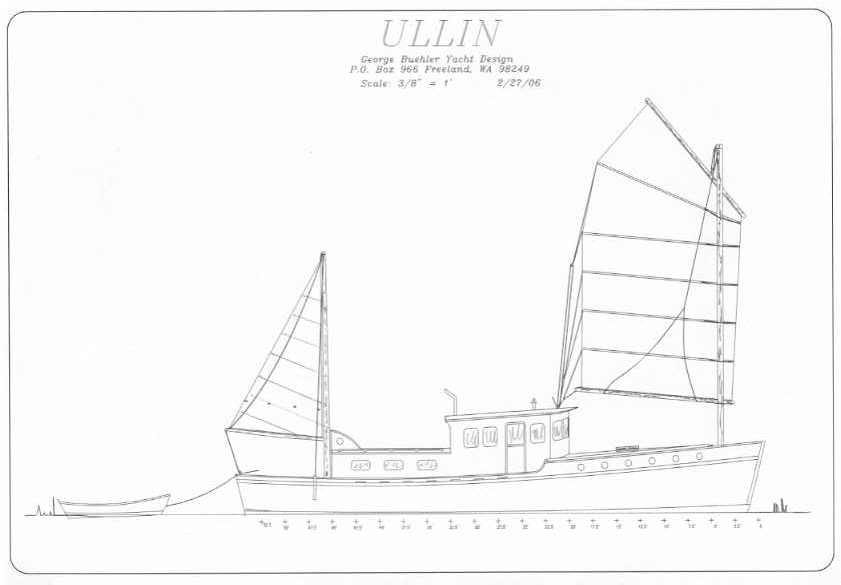