New 12/2015: Big Mel is now a charter sailing boat out of Scotland. More info at steaysail.nl

This is an older design, done for a Switz guy. Several were built at the Gdansk shipyard right around the time the Polish workers were organizing to kick out the commies. Maybe right after, I forget. Probably after, actually. The design is as simple as possible. 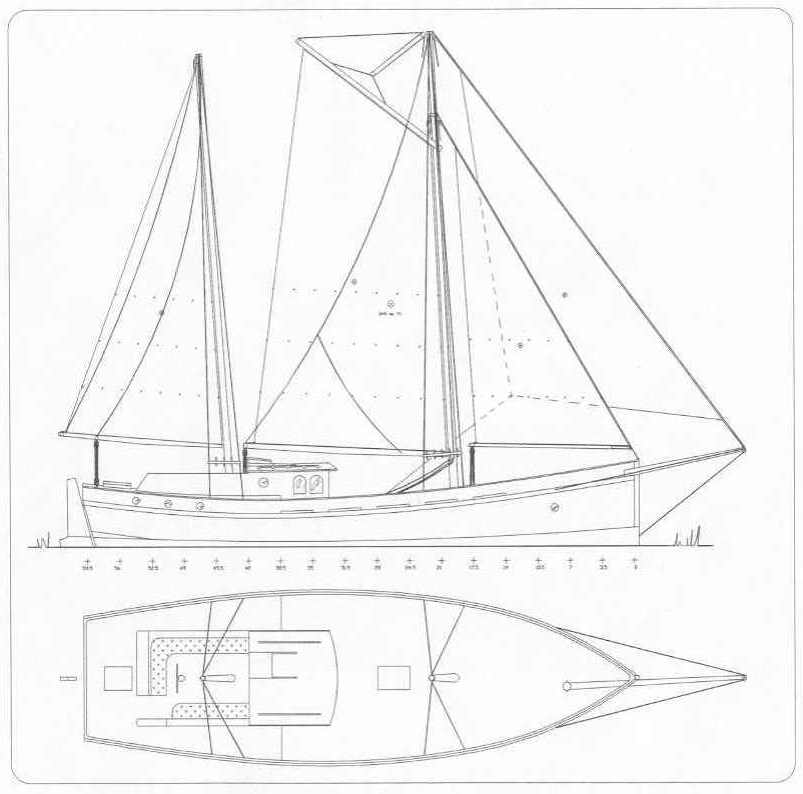 This basic rig is the basis for the photos below. The mizzen was raised and I believe they also raised the main boom and the pilot house a little. Oh, yes, and they put a marconi main on her. Those changes make her a better sailboat and I’ll include that sailplan if somebody wants it. 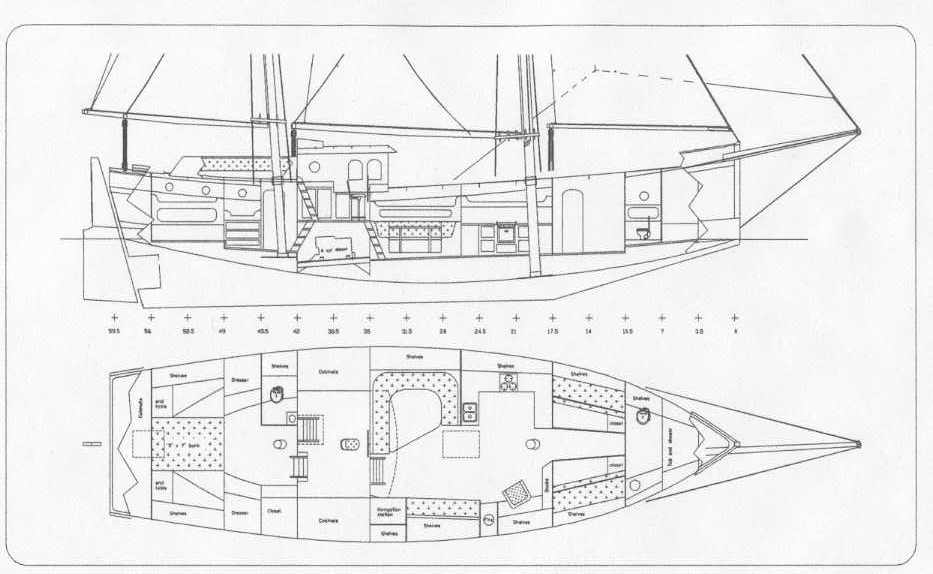 This Big Mel was used for years as a Dutch based charter sailing ship, cruising Northern Europe and the Baltics. The letter below the photos are from her builder/owners. In Oct. 2001 I was able to visit them in Holland. We spent a wonderful evening aboard drinking and eating to much. The ship is simply awesome! 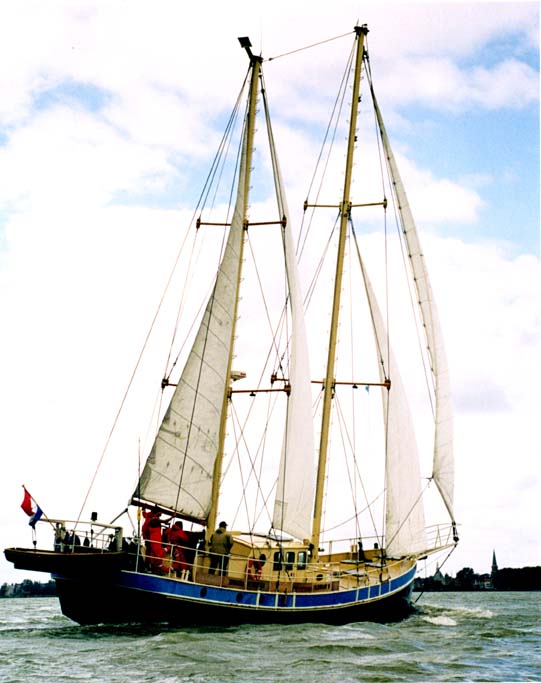 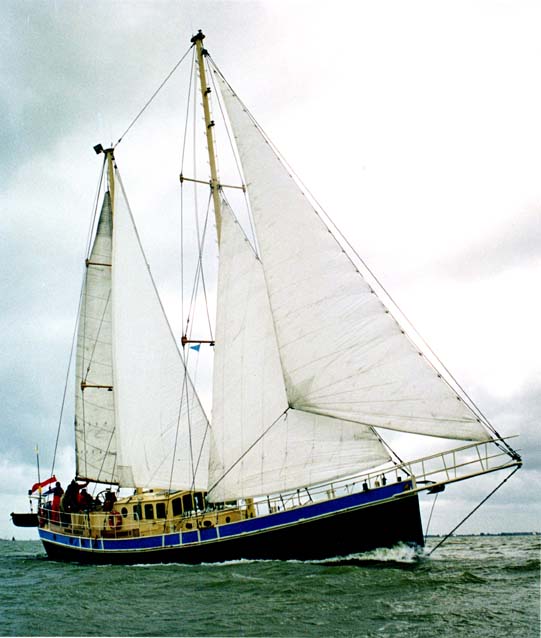 The one in this photo cruises the Baltic and another was a charter boat in Italy the last I heard. The plans include this ketch version as well as a schooner version  without a pilot house. Her 70 ton displacement means she has a huge interior so is suitable for use as a small cargo boat, as well as making a palatial live-aboard. 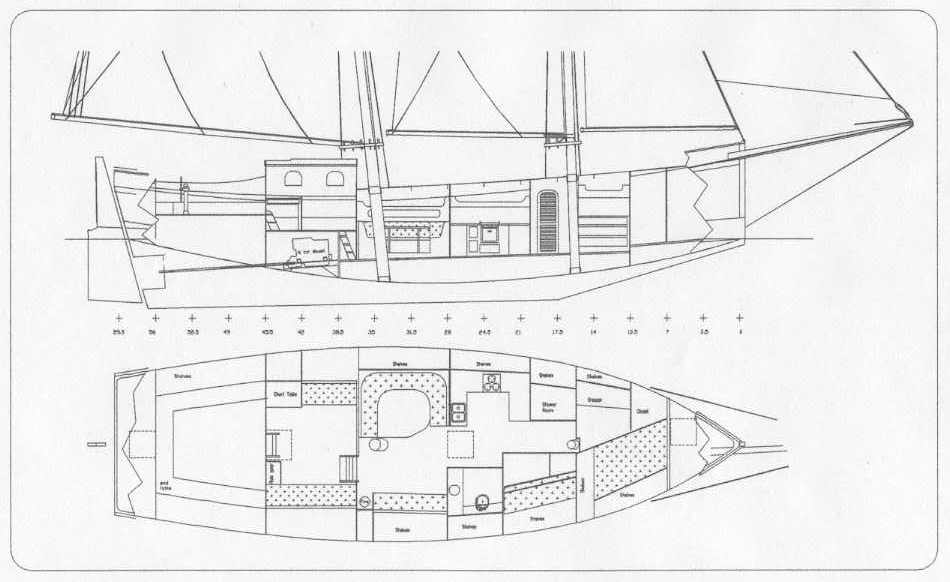 Here’s what she could look like as a schooner. This seems a bit awkward to me and I think the raised bulwark needs to be cut down some; something anyway. Maybe a longer deckhouse would help?

Here’s a letter from the Dutch owners of the beautiful “Big Mel” in the photo!

I sailed home from the Baltic area and finally found the time to clean up my ship and take the photographs you asked for such a long time ago. I sent them last week, so they should arrive these days.

The Baltic journey was great. I did sail there before but not in the eastern part, which turned out to be a really lovely sailing area. Climate circumstances are rather favorable (that is to say in summer!) – clear skies, temperatures between 25 and 35 degrees Celsius and a moderate wind, 2 to 4, sometimes 5 Beaufort, while the high latitude makes the days long out there. Tallinn and Riga are among the most beautiful European cities; the area in between counts some lovely bathing resorts, which managed to keep their 19th century charm, and huge territories of rather undisturbed nature. The numerous islands are mostly covered with pine woods. For me, used to a salty sea atmosphere, the smell pine trees miles out of the coast was a peculiar experience.The isles are scarcely populated, people are occupied with small-scale agriculture and fishing. There are some visiting yachts, some local, some from Finland, but it’s still quiet.

The ship kept fine, every mile of the 4,000we sailed. On the journey eastward we followed the German andPolish coasts, on our way back, against a western wind, we crossed the Baltic Sea between the Baltic, Swedish, Polish, German andDanish coasts. We had some pretty rough weather between the Gulf of Riga and Gdansk and in the German Bight but apart from a torn jib (which was repaired at Sail Service sailmakers in Gdansk -remember the name, they make excellent sails for very reasonable prices for boats of any size, from dinghies to tall ships) we had a comfortable trip. One of the strong points in your design,I think, is the pleasant movement of the ship in heavy seas. Even during Beaufort 8 it took the mate some time to wake me up.

Well, the ship is newly painted for the next seasons, normal life has taken over and I’m filling my days with socially adapted behavior again. Except for last weekend, when I had the change of sailing a replica of a Viking ship, owned by a friend, over the IJsselmeer, the inshore sea which forms the heart of The Netherlands. The type was originally developed during the early middle ages. To my knowledge it was actually the first ship in the world which could make a 60 degrees against the wind under sail. Leif Erikson discovered America with the same type of ship and during the first half of this century it was still used in Norway as a fishing boat. The one I sailed was only a small one – about 7,50 x 1,70 meter – but made a good 6knots under a square sail of 12 m2. Equipped with 6 oars it was easy to manouver her through narrow channels and locks. It’s good to navigate with ships like these now and then in order to keep in direct touch with nature’s strength.

The ship went up on the ways in June of 2003 for a little “re-design” of the prop aperture. She didn’t have good flow to the prop and wasn’t working quite right. At high RPMs there was even a “banging” sound from the turbulence I guess. Anyway, when the old engine bit the dust she was re-powered with a new 160 HP diesel, and the prop aperture was worked over. The results were very good. She approaches 10knots full out I think they said (I lost the letter) but in the Dutch canals, where wake is an issue, she runs at 5.5 knots at a little over 1 gallon an hour. That ain’t bad for a 70 ton ship! 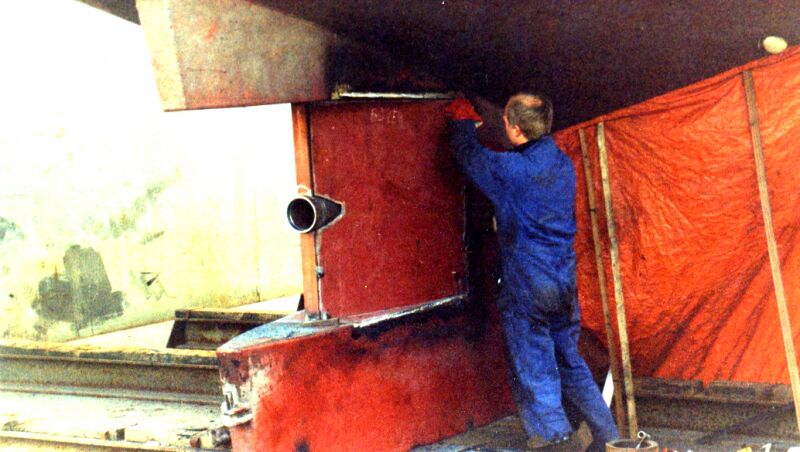 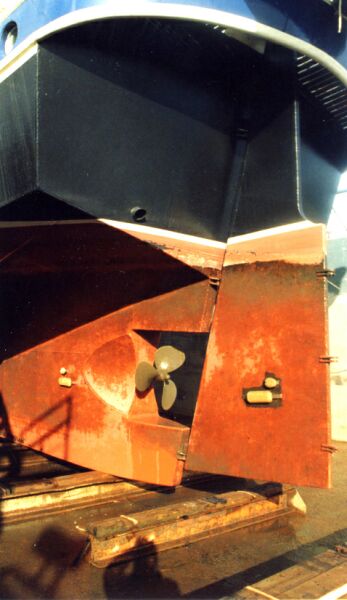 Here’s a 2003 photo of the original “Big Mel.” Werner had the hull built in Gdansk(?), at the shipyard that started all the trouble for the former Polish government. She was sold in 05 and now lives in Italy. The ship above was built there too by the way. 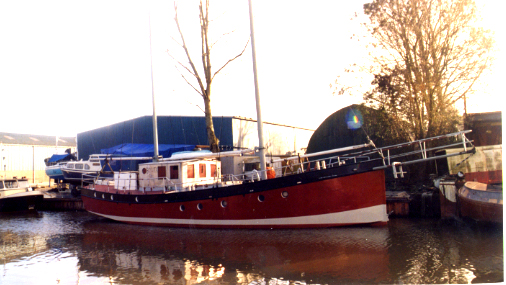