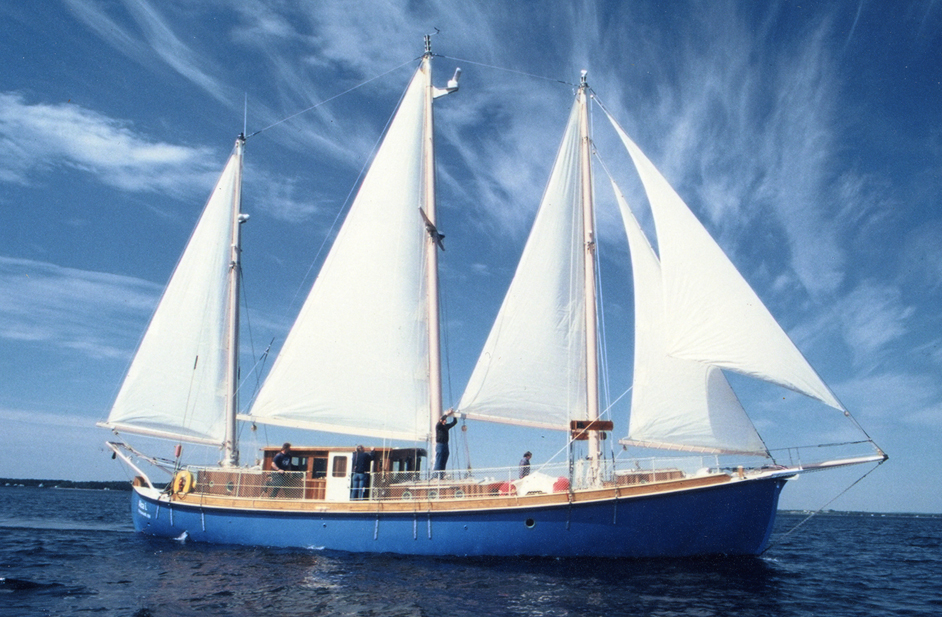 “We wanted to share with you how superb the Alca i performed this summer (2017), during its research cruises in the Gulf of Maine.”

I was very flattered to be asked to work with the owners in designing this boat, because large wood boats like her are rarely built today and even less rarely are they built from a new design.

The boat will be used both for pleasure as well as research. Walter & Karen are a pair of those “renaissance” folks you read about; he’s a research scientist interested in marine things like reefs and “growths.” She among other things produces documentaries about everything. In their “spare”time they run an 80 acre oak tree and organic farm on the shores of Virginia; the experience of meeting them and seeing their place still makes me tired when I think about it and I couldn’t help but think about Jefferson, also of that state. Where do these sort of folks get the energy? But maybe I’ve been on theWest coast to long; here we are notorious worldwide for taking things easy. Except in LA of course, but THAT is a world of its own…..

The idea was a big solid fairly traditional motor sailor that could go wherever you wanted. It would comfortably house the owners, have adequate accommodations for a couple guests, and have a small research lab in the stern for work.

She’s rigged as a 3 masted marconi schooner because she looks good that way and is big enough where the idea is actually “practical.” Everything except the jib is self tending and there are many reef rows so she should always be able to be kept manageable. A guy who knew his stuff could single hand her OK but with two people she’ll be easy to handle. Her rig has enough area to pull her along OK in moderate winds which is all that we want; short tacking up channels isn’t an issue for this kind of boat!She has a 6 cylinder diesel and carries 1,066 gallons of fuel which should give her a calm condition range of over 4,000 miles at 7 knots; considerably more when off wind motor sailing.

Her hull is a well proven type; sort of “life boaty,” double ended with moderate draft and beam, symmetrical ends, and a round bilge moderate dead rise mid-section.

She is quite stoutly built of solid white oak; laminated oak keel and stems, double sawed oak frames, and 2 3/8″ x 2 1/2″strip oak planking. The exception are the decks, which are 2 1/2″ fir plywood. The entire structure will be coated with epoxy.

Walter claims to be about 70 but looks 50. He’s been busily felling his own oaks, dragging them out of the woods and milling them, and building the boat. Just a few months after the Lines were drawn he had the keel set up. All this while working his job and doing research on the side….

I like the boat a lot. And so, while it almost seems like heresy,I’m doing a single chine steel version too, something us more “normal” mortals can conceive of building. 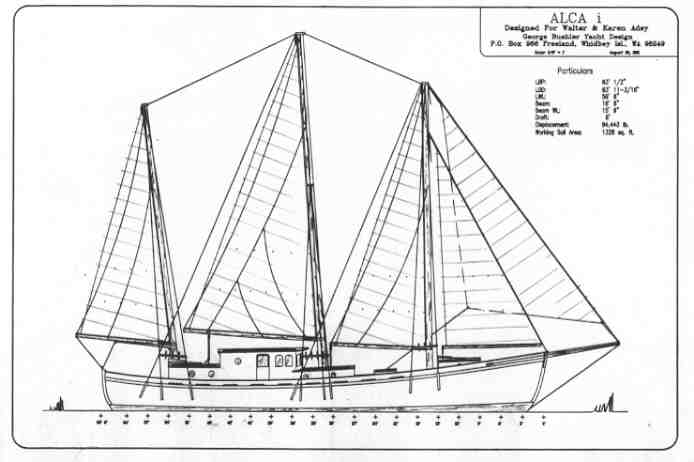 The interior is spacious for a group to sit around in, but still comfortable for the owners. 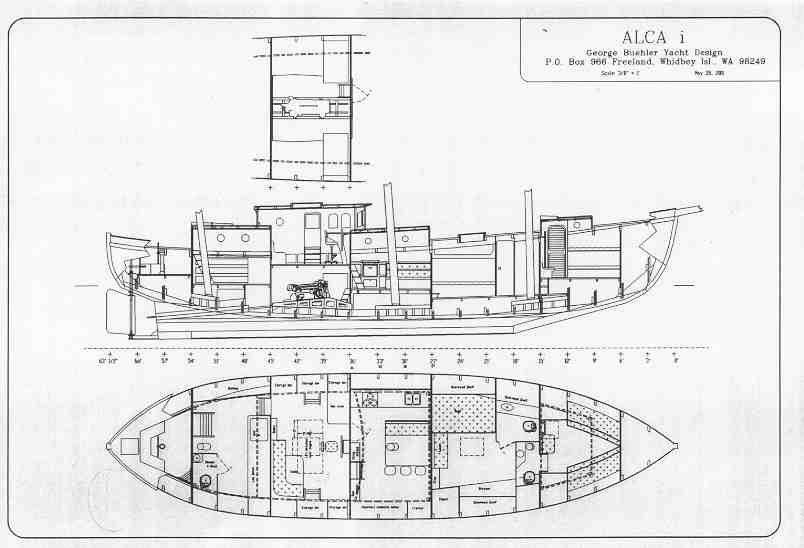 Construction is heavy but simple, thanks to extensive lamination. 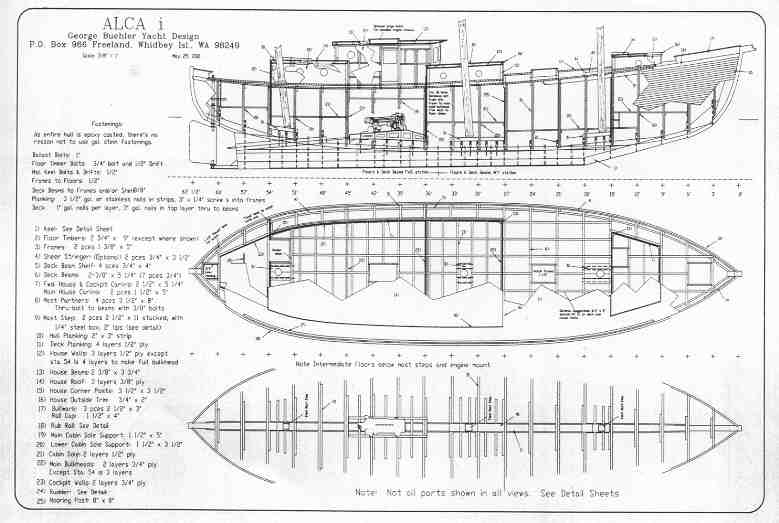 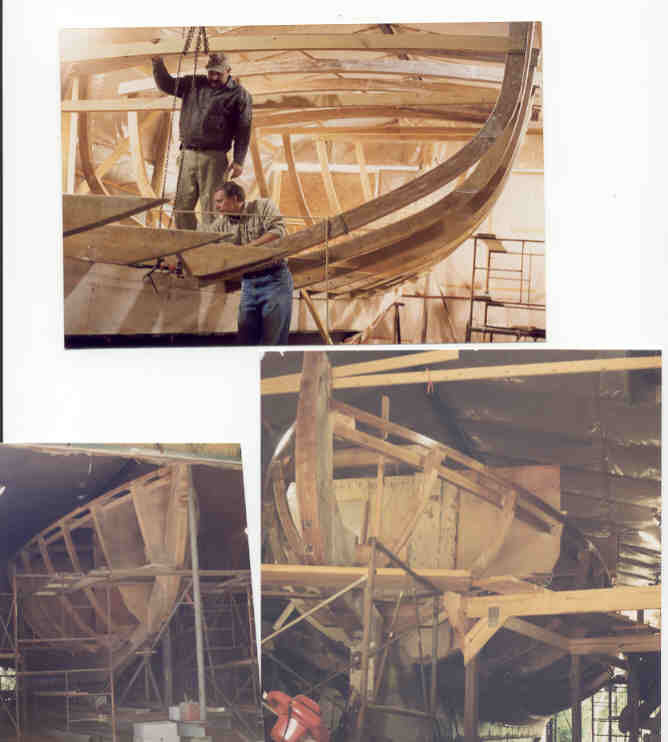 This is a serious construction project. A single chine version is also available. It too is a big project but simpler, but can be plywood or steel. Here’s how those Lines ended up. It looks fine to me and would be a hell of a lot simpler to build. 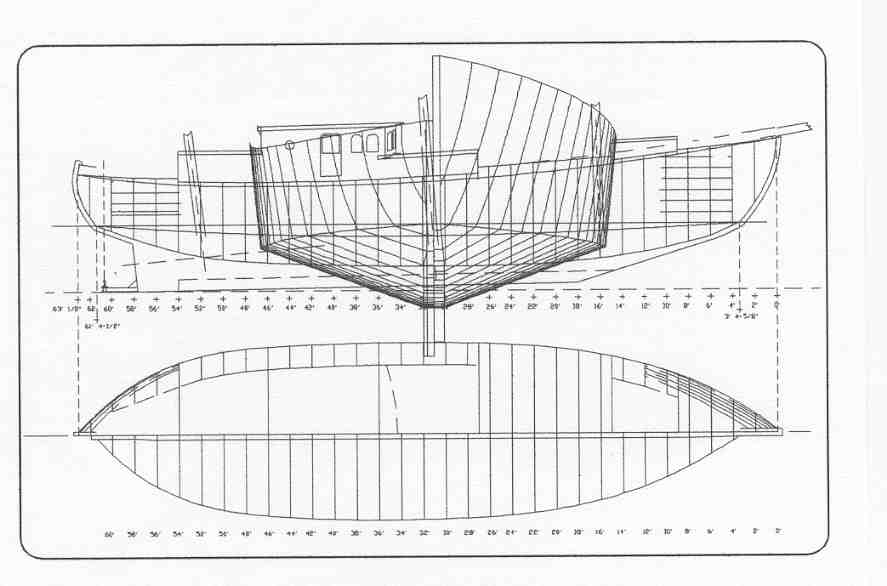 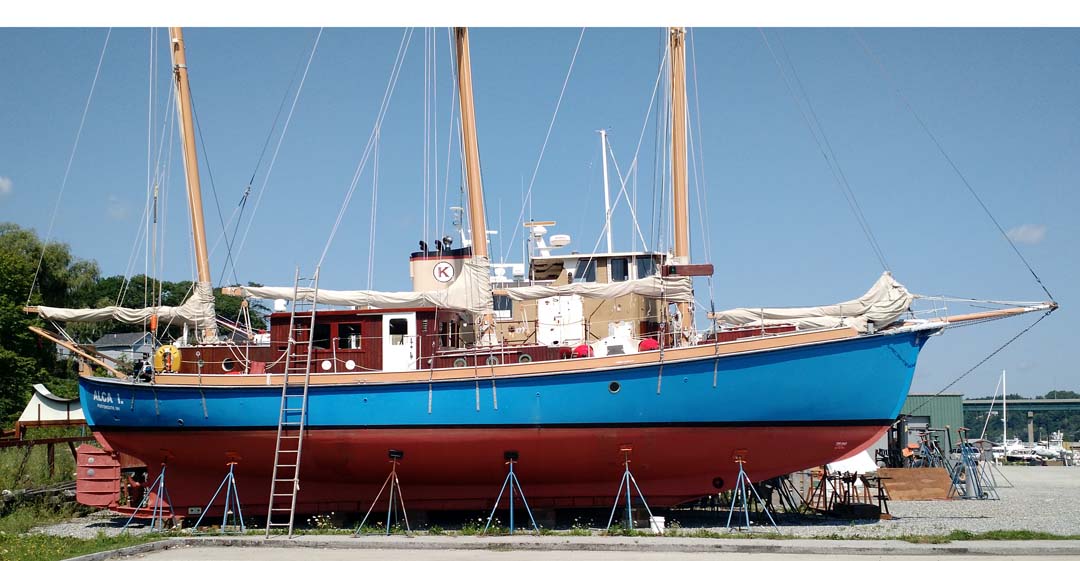 Continue on for more photos including under sail