Page 12: Finished and off on a first cruise….

Finally everything is together and she heads off to Greece for a trial run. She worked out as well as hoped as the owner’s comments below describe, although when fully loaded down for her trans Atlantic crossing we think she’ll be sitting 9″ lower than I had guesstimated. This seems to happen with all of my original wood designs when they are built of steel. It doesn’t hurt anything and just makes her ride better. 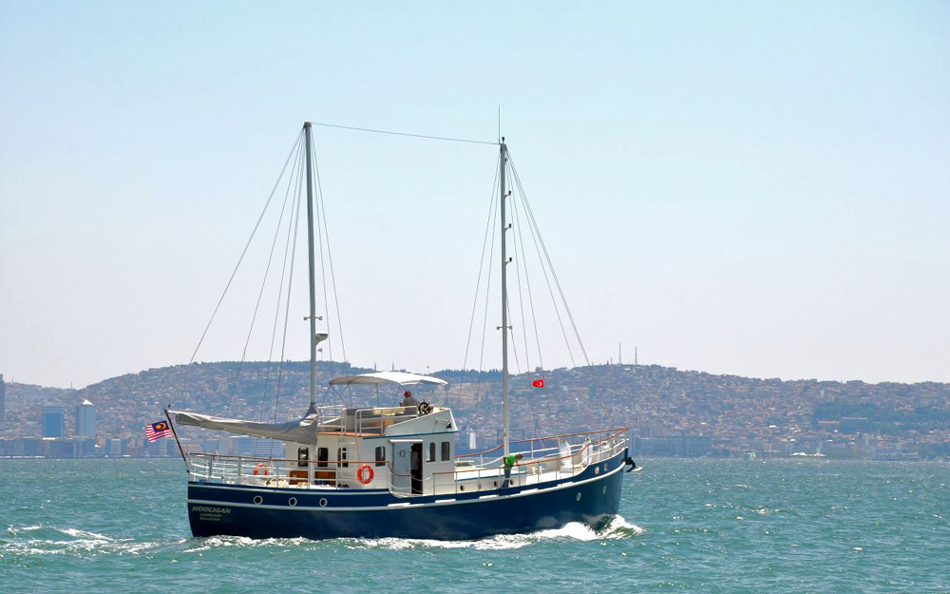 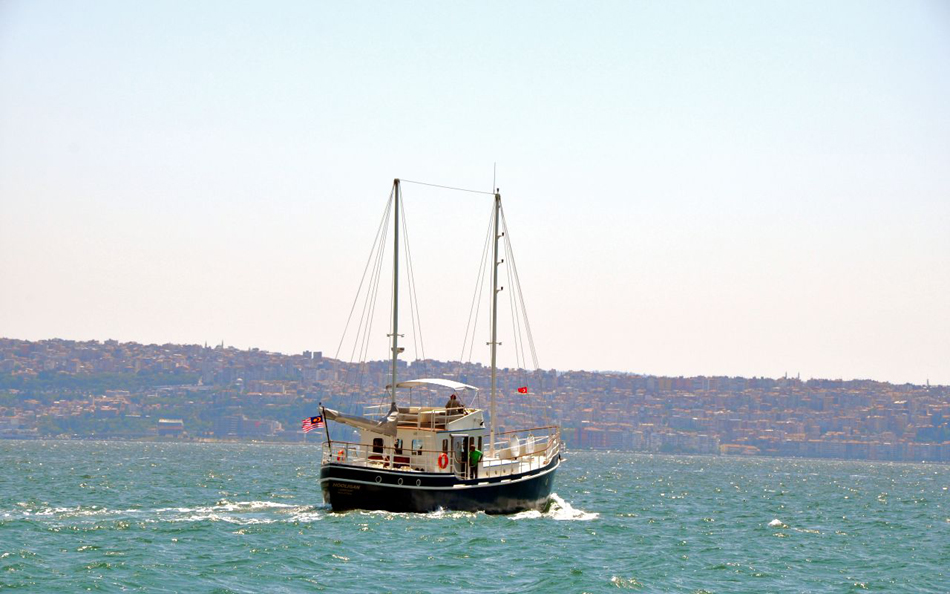 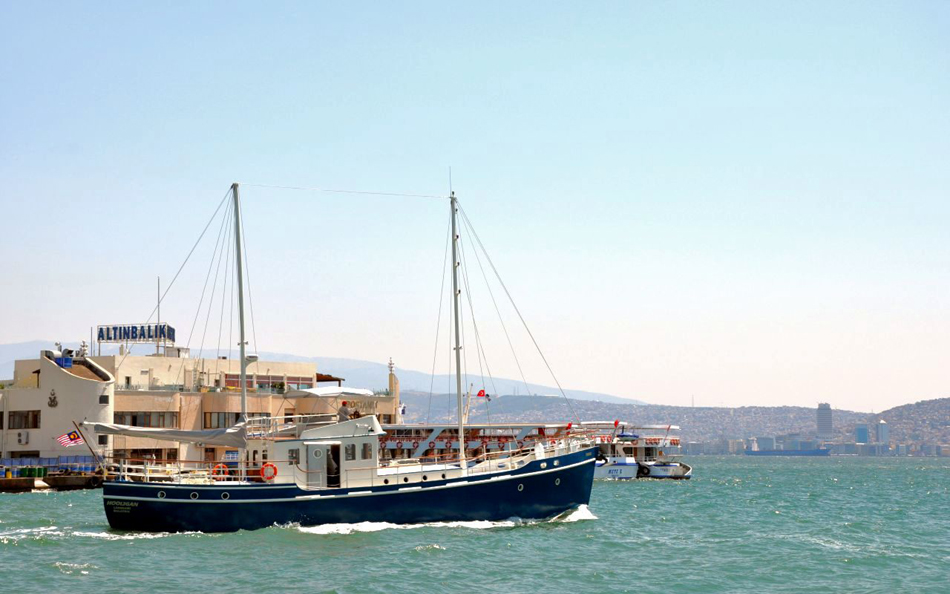 “I have just returned from Turkey and Greece where we did the trials, commissioning and first voyage with the mighty Hooligan, I had fine weather and was grinning so much I sunburned my teeth.

A couple days of living onboard and setting up house reinforced the fact that this is a big and very comfortable boat, found a few other issues such as paint scratches and slow shower drains, etc but a little work from Kaya’s guys soon put all the punch list to bed and sorted everything out. There wasn’t much to fix and they got to it pretty quickly with good results in all cases.

We then took on a full load of Water and 1000 liters of fuel and headed for the customs dock to “export” the boat. This went well and the bay was smooth but a short nasty chop on the beam and 20 gusting 25 knots wind made another good test for an hour or so. We exported the boat and then took off on the maiden voyage to Greece over night to Khios.

Out of the bay the wind blew even stronger and the route gave us all points of sail including 2 hours dead on the beam with meter and a half swell and 20 knots or so wind. She tracked smoothly and reliably with an even, slow roll state, very, very comfortable, nothing broke and everything worked fine. The wind was howling at this point and a pretty good sea was running when we arrived at Khios at 3:30 in the morning, we could not see the marina approach in the shore lights and there was fringing reef near the entrance so we decided to anchor out until daylight and make a safer saner approach to a strange harbor. We then pick down in about 40 feet of water 200 foot of chain out, made sure we had a good anchor and went to bed. It was howling and rough and we slept very comfortably on the anchor swung into the wind. Again major points for the big heavy stable nature of the boat.
We put into the town harbor and stayed a couple of days not major test of the boat except the regular systems, water, sewage, toilets, air conditioning, sinks, stove, microwave, etc, everything worked fine and we cleaned her up more and more as she was on display, essentially on the sea wall, downtown next to a long row of bars and restaurants. Everything was settling in and stayed working!

Next morning, still blowing hard and we headed back to Cesme Turkey to a new marina, it was blowing like stink with swell of a meter and a half dead on the beam, rude conditions for most motor boats but we set out to test the boat. She definitely rolls in such conditions but it is a big slow comfortable roll, we decided to put up some sails to see how that would steady the boat (or otherwise) and were just getting ready when the engine died, we tried to crank it no good, so we went ahead and got some rags up to control her and keep her moving. This was a major surprise and she actually sailed at 3.5 knots under a small bit of jib on a beam reach in 20 knots or so. It was windy and sloppy and we just moseyed along to Cesme harbor and threw the pick down again. It turns out we had run out of fuel. With the rolling around in the rough conditions we had sucked some air into the engine and the pick ups are high on the tank to prevent sucking tank bottoms so we were “empty” with 500 liters of fuel on board. We got some fuel from some charter boat guys and that was that. The lesson is she will sail, quite comfortably in good conditions You can reach and run somewhere but don’t expect to point like a race boat, she won’t go much closer than 50 to 45 degrees to the wind max, the way she is set up but, the sails steady the boat immensely which is exactly as Buehler expected and discusses so much, it does work.

So In conclusion, we got a good test in, had some problems, the boat easily took care of us and she does exactly what she is advertised to do. The fit and finish are excellent for the price and Kaya’s team worked out any commissioning issues immediately. The boat sits low on her DWL but the next one will have a higher DWL painted on so that is that and really of no real consequence, George discusses that on his website alot and you can read up on it there. I have great systems and good gear and accessories and for the price, I don’t think you can do near as well anywhere else. I had a good experience building this boat, she was four months late on delivery but considering the world economy going to rat shit a both the day I started building this thing, that is not an issue, I suspect the dollar Euro inversion did not help Kaya’s operating budgets or timing on this boat but he stuck it out, honored the contract and delivered me a great boat. This is my seventh large boat and she is the best one yet and well worth the wait.”

Back to Beginning of the ELLEMAID series