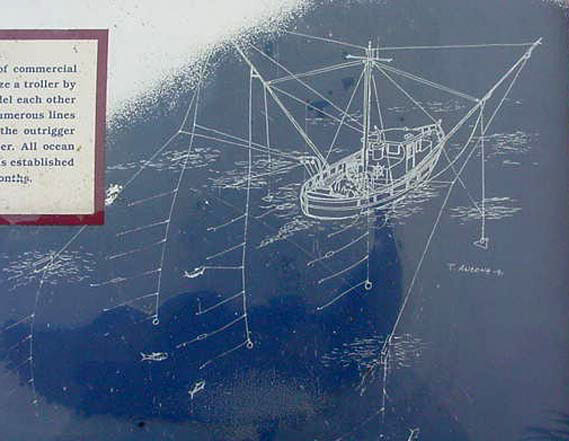 A Troller catches fish by trolling lines, and the above drawing, taken from a public information display at an Oregon dock, shows a traditional troller with all lines out. Boats like this were frequently run by one person. I personally don’t have a clue how you work the damned things but I AM going to learn. Below are a pictures (2011) of a very serious little troller, in Westport, Washington. Look at the poles and wires! It would be a real kick to go out once and film how the guy does it all!

HENRIETTA (top & bottom) lives in Newport, Oregon. I heard she sold in 2011 and her new owner is taking good care of her.
House aft trollers aren’t common. SHARON (above) is an exceptionally well kept up ship. I don’t know how old she is but I know one of this type, still fishing, that is over 100 years old. It was originally built as a sailing schooner with a gasoline engine, then eventually done over into something similar to this boat.

The “Monterey Clippers” used to be almost as common a s Chevys in 1960s California. Originally sail, they were developed by Italian and “Portuguese” immigrants (they can fight about who exactly) to the San Francisco area. I remember fleets of them, and today you can usually see at least one in most west coast harbors. Here’s three of them. The one on the top left has a beautiful bow. Sadly, she’s being neglected.
Converted Trollers
Working Trollers
Yachts Based on Troller Concepts
Blogs
Links
Letters